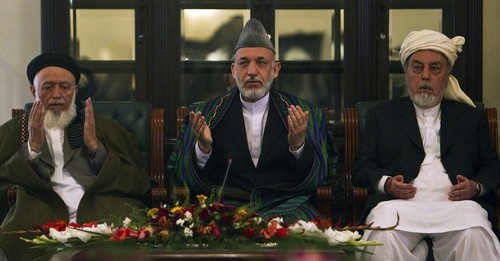 There was encouraging news out of Afghanistan this week–for a change. That news was that the Karzai government in Kabul and the Taliban leadership (which part or parts unspecified) have entered into preliminary discussions about meeting face-to-face to pursue a peace settlement to their civil war, in which the United States insinuated itself in 2001 and out of which it seems unable to extricate itself. After a midweek flurry of coverage in which the initial sticking point seemed to be finding a place to talk where the Taliban would feel safe from capture and bland U.S. assurances that the idea of Afghans talking to one another was okay with us, the discussions have gone appropriately subterranean. Now we wait and see.

This initiative may not go anywhere, but it does symbolize the kind of process that will probably eventually lead to a meaningful attempt to bring what passes for peace to Afghanistan. A process involving the internal parties but without a visible, overshadowing outsider (i.e. American) role is clearly preferable to one in which the U.S. is clearly prominent. For one thing, it can resemble the classic, loya jirga methodology by which warring Afghan tribal factions normally conduct their business, including cessation of warfare among them that is such a recurring part of Afghan history. Second, it is an Afghan process that is more likely to produce an outcome with which the Afghans themselves feel comfortable than one that the Americans “impose.” Third, if the United States does not like the outcome enough, we do not have to embrace it. Fourth and most importantly, an Afghan-negotiated peace represents the cleanest way for the United States publicly to wash its hands of the entire situation–arguing that we have done our job and that the rest is up to the Afghans itself. This, of course, is the ultimate goal of the United States–extrication from a situation in which there is no reasonable hope the U.S. can plausibly achieve anything that resembles “victory.” This is Afghanistanization in practice, the legacy of Vietnamization and Iraqification.

What might an agreement acceptable to all (or at least most of the primary) Afghan actors look like. It must have two bottom lines: the Karzai government in Kabul must remain at least officially in power (although probably part of some power-sharing regime with the Taliban) and with the non-Pashtun areas of the country not under Taliban control–the status quo from a government vantage point. It must also leave the Taliban in effective control of the rural Pashtun regions (those dominated by the Ghilzai Pashtuns who are its base) and along the border with Pakistan, to hasten a retreat if peace breaks down (always a possibility in Afghanistan). In addition, the Taliban will require some symbols of power, such as more than token representation in the Karzai cabinet. Brokering exactly what that might mean (which cabinet portfolios the Taliban gets) will prove to be tortuous, as the ongoing Iraqi situation is testimony. Also, no agreement is probably possible (at least not from a Taliban perspective) if it does not include for a rapid removal of NATO/American combat forces from the country.

This latter part of the equation is the tricky part, because, as we are already beginning to see in Iraq, American influence wanes directly in proportion to the reduction of American forces in the country. As in Iraq, the United States would always retain the formal ability to reassert itself, but everyone will know that once the Americans pull out, there is no way politically to send them back.

This presents the United States with its greatest risk in this process. The United States can live with a power-sharing political outcome in Afghanistan, IF it includes a provision that the new regime will not allow for an Al Qaeda return to an Afghan safe haven. Such an agreement will almost certainly be part of any peace outcome: the Karzai government certainly does not embrace Usama bin Laden and his supporters, and the Taliban is likely to abandon their Pashtunwali commitment of hospitality to Al Qaeda in return for getting rid of the Americans. The question is whether the new Afghan regime will–or be able to–live up to such a pledge. It is an imponderable, and a chance the Americans will have to take.

Will such an outcome guarantee peace and stability in Afghanistan? Of course not. For one thing, such an outcome would necessitate a strong central regime in Afghanistan, and that almost never happens in that country. The outcome will have to be a reversion to basic tribal autonomy, and such outcomes have never resulted in long-term stability. Afghanistan is simply not a very peaceful place, and that is unlikely to change. For another, it must be apparent to all concerned that the current situation is a stalemate unlikely to be resolved decisively in one direction or another and that the alternatives are indecisive war without end or at least a peace respite. Better something than nothing.

From an American (and especially administration) viewpoint, the outbreak of a peace process is a rare window of opportunity to get ourselves out of this mess in  a way parallel in structure (if hopefully not in ultimate outcome) to getting out of Vietnam and Iraq. The appearance of peace and a settlement where the interests we have backed at least have a plausible chance at success (if not a guarantee) was the kind of atmosphere in which we got out of Southeast Asia and Iraq, and it is also the best environment we can hope for here.

I personally hope the Obama administration has realized all this and has been working hard and successfully to bring about the peace process the tip of the iceberg of which we saw last week. It is no revelation that the elections in two weeks are not going to go well for Mr. Obama, that the 2012 presidential election campaign will kick off no later than the second week of November of this year, and that the administration needs a triumph and issue to energize a skittish base. Moreover, the federal deficit would certainly benefit from an end to U.S. involvement in Afghanistan. Republicans would, of course, howl about the dire consequences of getting out, but they are not going to vote for Obama regardless of what he does there. Beginning an accelerating process of extrication from the morass in Afghanistan could be just what the doctor ordered.

Donald M. Snow, Professor Emeritus at the University of Alabama, is the author of over 40 books on foreign policy, international relations, and national security topics. This essay first appeared at his blog What After Iraq? Photo credit: Reuters Pictures.