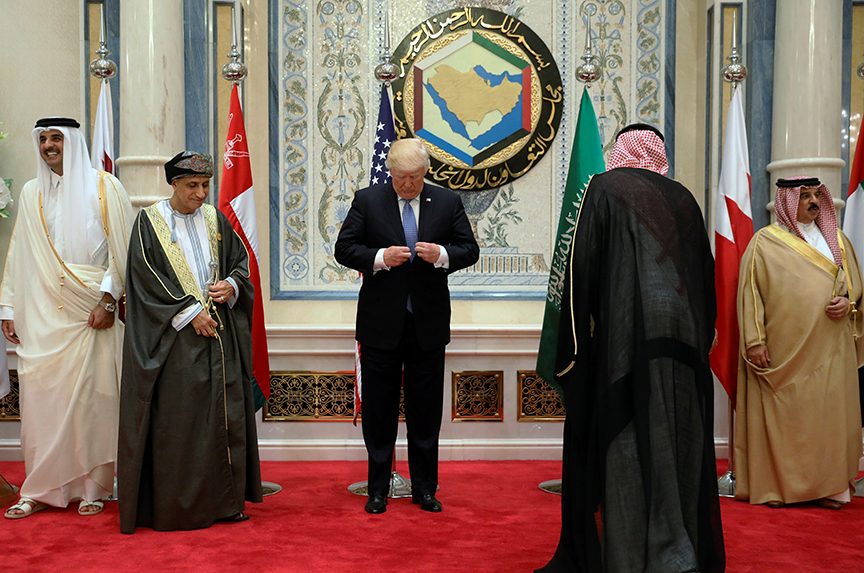 The Arab world is in a sorry state. The spat between the Gulf Cooperation Council (GCC) and Qatar is but the latest symptom of an enduring serious rot in governance and a destructive power struggle in the wake of the Arab Spring. This situation is compounded by a lack of constructive dialogue on addressing the challenges that face most countries of the region.

Qatar’s excommunication from the GCC is the latest schism to hit what has seemed, at least since 2011, to be a stable and unified bloc. On June 5, the United Arab Emirates (UAE), Saudi Arabia, Bahrain, and Egypt broke diplomatic ties with Qatar and cut off air, land, and sea transportation links. On the surface, it appeared that Qatar’s alleged support for terrorism was at the heart of the dispute. Certainly, US President Donald J. Trump’s tweet, sympathizing with the action taken against Qatar, implied that this was his understanding. It took reminders from the Pentagon and the US State Department of US national interests in Qatar and its strategic interest in Gulf stability to get Trump to pull back on his original impulse to take sides and instead advise Saudi King Salman to seek unity and harmony within the GCC rather than allow a dangerous escalation in rancor.

The rift within the GCC, or at least this latest manifestation of it, has more to do with power and leadership than terrorism. GCC members are mostly opposed to maintaining good relations with Iran, talking to the Houthis in Yemen, and supporting some Islamist factions in the region.  Support for the Muslim Brotherhood, specifically, has been an issue of contention between Qatar, which supports the Brotherhood, and Saudi Arabia and the UAE, which generally do not.  On this, too, Saudi Arabia has been at odds with the UAE over which groups to support inside Yemen. Saudi Arabia, leading a coalition in the fight against the Houthis, has itself accepted Yemen’s Islah party, which houses within its coalition the country’s Muslim Brotherhood. To boot, Riyadh continues to host and rely on Ali Mohsen al-Ahmar, a Yemeni Islamist general who has a long history of shady deals and alliances.

The point of variance on all these issues is not so much the principle behind the particular policy but the question of who strategizes and who leads. In Saudi Arabia, the young, ambitious, and hard-driving deputy crown prince, Mohammed bin Salman, is the power behind the throne. He seeks to lead not just in the region but beyond through a Muslim (albeit mostly Sunni) coalition that can help him achieve the regional upper hand and enhance the kingdom’s international stature and influence.  Qatar, in turn, has a new young leader in Tamim bin Hamad al-Thani who has of late attempted to follow in his father’s footsteps in maintaining a semi-independent line that stresses the ability to launch diplomatic initiatives and keep open lines of communication to Islamist groups, which Qatar considers facts of life in the region.

In an ideal GCC structure, and in the spirit of an honest and open dialogue, all these contentious issues could be discussed and different tactical approaches coordinated towards the groups and nations in question. The mood in the GCC and the region, however, is neither ideal nor conducive to that spirit. It is difficult, therefore, to see how this rift can be mended short of one member losing face and/or position in the process. In the case of the GCC rift with Qatar, even if Kuwait’s offer of mediation succeeds, tensions are likely to linger and further fuel regional instability.

Yemen and Syria, two countries that have fallen prey to deep internal fissures and become part of regional and international power struggles, are no longer viable unified states. Despite a balance of power in its favor, Syrian President Bashar al-Assad’s regime is unlikely to restore its influence over all of Syria anytime soon. The struggle for land will inevitably be followed by a struggle for power within any unified state regardless of who coerces that ultimate union into existence.  The minorities question, especially that of Kurdish sovereignty and independence, will have long-term ramifications and the direction of Syria’s foreign policy, let alone the question of its identity, will linger given the deepening Iranian influence and a festering regional power struggle between Iran and Saudi Arabia.

In Yemen, instead of the Arab world falling over itself in attempts to save the country from division, famine, and disease, the country finds itself in the limbo between its neighbors’ regional ambitions and strategic interests on the one hand and the indifference and/or impotence of the permanent members of the United Nations (UN) on the other.  Despite the tireless efforts of UN Special Envoy Ismail Ould Cheikh Ahmed and international humanitarian agencies, no one with the power to stop the tragedy in Yemen—such as Saudi Arabia or the United States—has stepped up to empower the UN to end the war.

Egypt, of course, remains mired in the throes of a security maelstrom, sectarian extremism—of which the minority Christian Copts have been the main victims—and an economic downward spiral that threatens the military regime with further upheaval if it cannot create jobs and an acceptable standard of living for the booming young population.

The rest of North Africa, including Tunisia, which has had a relatively positive post-Arab Spring experience, still suffers from growth pains, specifically instability, weak economic growth, and governance problems in the face of rampant corruption, poverty, and rising demands from the youth.

The Arab Spring in 2011 triggered a political upheaval in the Middle East that quickly descended into chaos and violence. This has complicated a fluid regional power balance that was already upset by religious and sectarian extremism and the competition for regional supremacy.

In a perfect world, the region’s intellectual leaders would think collectively and the nations act in concert to ease the situation. Unfortunately, this is an age of intellectual decline in the Arab world. There are no literary giants or political philosophers to offer guidance, no benevolent rulers to persuade rather than coerce, and no solidarity among the big powers to help ease the pain—conditions which are likely to endure and fester for years to come.

To borrow the sad words of the English poet Matthew Arnold, the Middle East these days “Hath really neither joy, nor love, nor light/Nor certitude, nor peace, nor help for pain/And we are here as on a darkling plain/Swept with confused alarms of struggle and flight/Where ignorant armies clash by night.”

Nabeel Khoury is a nonresident senior fellow with the Atlantic Council’s Rafik Hariri Center for the Middle East. You can follow him on Twitter @khoury_nabeel.

Image: US President Donald Trump (center) prepared for a family photo with the heads of state at the Gulf Cooperation Council leaders’ summit in Riyadh, Saudi Arabia, on May 21. (Reuters/Jonathan Ernst)