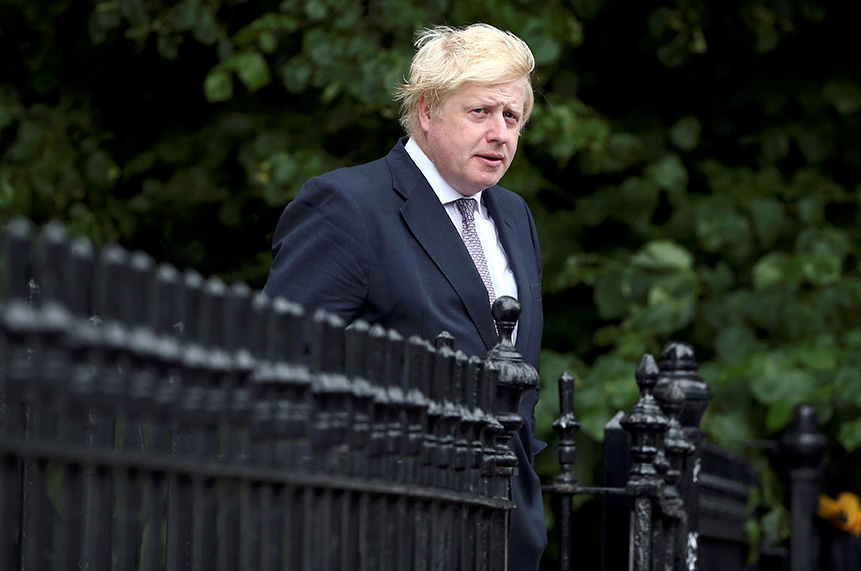 Advocates of a “hard” Brexit, granting the United Kingdom full independence from the European Union (EU), are belatedly beginning to understand that the EU is a bit like Hotel California in the famous song by the Eagles—”You can check out any time you like, but you can never leave!”

As British Prime Minister Theresa May’s cabinet wrestles with obscure points of detail on the United Kingdom’s post-Brexit trade relationship with the EU, it can find no solution acceptable both to the “hard” Brexiteers on whom May relies to support her government and to the EU—and which would free the United Kingdom completely from the EU’s chains.

As arch-Brexiter and Foreign Secretary Boris Johnson warned in a leaked private speech this week, the United Kingdom could remain “locked in orbit around the EU” for the foreseeable future.

The fundamental problem is that the determination of the most ardent Brexit supporters to control the country’s borders, money, and laws after leaving the EU is impossible to attain if genuinely “frictionless” future trade with the EU—which everyone favors—is to be established.

It was in order to “take back control” that May drew her original red lines rejecting a customs union, the single market, or any supervision by the European Court of Justice. Remaining in the customs union and/or the single market would involve submission to EU regulations without having a say in them, a substantial monetary contribution, and free entry of EU nationals into the United Kingdom—a formula that Brexiters believe would turn the United Kingdom into a “vassal state.”

Now, it is ever clearer that any other possible solutions outside May’s red lines would still involve a degree of control from Brussels that the hard Brexiters could not accept. And they could bring down her government at any time they wanted—no matter how rash such a move would be.

As a result, more Brexiters are arguing that the United Kingdom should play for time and simply leave the EU at the end of next March, after which it could negotiate a free-trade deal from the outside. The most important objective—Brexit—would have been accomplished. But that would cause massive economic disruption and would arouse fierce hostility in the EU—and again would not actually solve the problem of achieving free trade without accepting some EU regulations.

All this came to a head this week in an impasse in London over the frontier between Northern Ireland and Ireland (an EU frontier after Brexit), which all sides agree should not become a “hard border” after the United Kingdom leaves the EU. The simplest—perhaps only—way to achieve that would be to keep Northern Ireland at a minimum in the EU customs union, and to apply all relevant EU regulations on both sides of the Irish border.

That would allow goods to cross the border without the need for inspection. And It is not just a matter of duty-free trade, but ensuring that goods conform to EU regulations, as well as health and tax requirements.

This arrangement has already been agreed by both sides as elements of a “backstop” solution, to be finalized this year, to be implemented if no agreement is reached, either on the Irish frontier or on the wider future trade arrangement between the EU and the post-Brexit United Kingdom.

But if there can be no kind of border in the Irish Sea, then the rest of the United Kingdom would have to apply the same rules and regulations as Northern Ireland, meaning many EU regulations and trade policies would continue to govern the whole country. Among the worst fears of the Brexiters are that such a “backstop” solution could easily slide into permanency, keeping much of the UK economy, and its trade policy, locked under EU control.

So the Brexiters have been demanding a time limit for such an arrangement—the same 2021 date as the end of the transitional period after the United Kingdom leaves the EU in March next year. By then the United Kingdom believes, somewhat unrealistically, that it will have negotiated a comprehensive new economic and trade relationship with the twenty-seven-nation EU, incorporating a solution to the Irish issue.

May, however, does not want a precise deadline—nor does Ireland or its EU partners. If there were no agreement on future trade relations by the time the end date came along, it would be highly likely that a “hard” border would have to be reintroduced, threatening all the achievements of the Irish peace process under the 1998 Good Friday agreement and reigniting a serious threat of violence.

Such an eventuality is all the more likely because May’s cabinet has repeatedly proved incapable of agreeing on what kind of future trade pact it wants after 2021. And there are several other obstacles. In the first place, the EU may refuse to allow the “backstop” deal to be extended to the rest of the United Kingdom, on the grounds that the United Kingdom would be gaining entry to the EU market by the back door—or effectively “cherry-picking” elements of access to its market, which is ideologically unacceptable.

So, we have arrived at the point where earlier this week British cabinet ministers were arguing over whether a “time-limited backstop” should actually have a time limit—with David Davis, the Brexit secretary, hinting he might resign over the issue. Once again, a fudge was agreed which suggests that 2021 is “expected” to be the limit—enough to allow Davis to claim victory.

All this is going on in a manner almost completely disconnected from Brussels, which is anyway likely to reject most of the solutions proposed round the cabinet table in London. As a commentator for the Telegraph wrote this week, “For now, Europe is reduced to the role of spectator as the British cabinet tears itself apart over a temporary customs union backstop plan that the EU side has already made plain will not, on its own, deliver the invisible Irish border both sides have pledged to maintain.

“The frustrating thing on this side of the channel is we don’t have any leverage on what is happening in the UK,” says one senior EU diplomat involved in the talks. “We are spectators, watching them beat each other up. But we don’t play a role in that. Ninety percent of the energy never leaves London.” So for now the EU side seems to have moved to a new, second stage of grief with the United Kingdom—from rage to resignation.

May will put her latest backstop plan to the forthcoming EU Council on June 28 and 29. But she will not have much else to offer, particularly as she has decided to postpone the publication of proposals for the United Kingdom’s overall future trade relations with the EU until after the meeting. Now officials in London are predicting the real crisis will come in October.

Even with a few more months, however, the United Kingdom will still be stuck at the check-out desk of the Hotel California.

Image: Vote Leave campaign leader, Boris Johnson, leaves his home in London on June 27. Johnson has been reluctant to push for the invocation of Article 50 of the Lisbon Treaty that would formally begin the process of the United Kingdom’s exit from the European Union. (Reuters/Neil Hall)