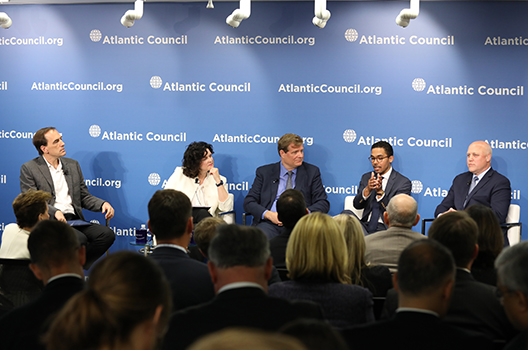 On a recent trip to Antarctica with scientists studying the effects of climate change, Jeff Goodell witnessed a twenty-five-mile-by-forty-mile section of ice calve off West Antarctica and collapse into the sea. Even for Goodell, who has long written about the effects of climate change and is the author of “The Water Will Come,” a book that examines the impact of rising sea levels, this was “an eye-opening experience.”

“It really gave me a sense of the scale of what we are facing with climate change,” he said.

Mitch Landrieu, a former mayor of New Orleans, recalls a similarly impressionable experience. “When you saw that glacier fold it was kind of like watching your city being under seventeen feet of water, 1,800 people die, 500,000 homes hurt,” Landrieu told Goodell referring to the devastation Hurricane Katrina caused to New Orleans in 2005.

The new Center has a goal of enhancing the resilience of one billion people by 2030. It aims to achieve this goal by identifying, implementing, and scaling solutions to the urgent crises of climate change, migration, and security.

As mayor of New Orleans from 2010 to 2018, Landrieu, a Democrat, helped put the Katrina-battered city back on its feet. “We had to build the city back and we had to really start thinking about the notion of resilience along with Rockefeller [Foundation],” said Landrieu. When the Rockefeller Foundation launched the 100 Resilient Cities initiative “we began to think about it in a really significant way,” he said.

He added: “If we know what’s coming and we know that it is likely to occur, shame on us if we don’t get ready for it and prepare ourselves for the dangers that actually confront us at this moment.”

Bouchard made the point that the private sector is looking to partner more and more to get different perspectives on a problem. “It is a team sport,” he said. “The bigger the teams get, the more we are going to be able to achieve.”

Hebert recalled of his time as New Orleans’ chief resilience officer that working in partnerships with cities around the world was important for thinking about solutions. “But now is time to act and move forward on investing in solutions,” he said. This is where the Adrienne Arsht-Rockefeller Foundation Resilience Center will play a critical role.

Asked by Goodell how the Center would prioritize its work, Baughman McLeod acknowledged that it is “easy to say we’ll go to these places and touch a billion people.”

“But for anybody that has worked in places, in country, in communities, it is not as simple as saying we’ll just go there and do this. You have to go to a place that wants to work together; you have to go to a place where you understand the culture and the context in which you are working,” she said. “One of the biggest criteria will be, can we be successful in that place,” she added.

Goodell noted the question about priorities brings up questions about social justice: “who do we save, who do we help, how do we make these decisions?”

In New Orleans, the Lower Ninth Ward—a working-class black neighborhood—was ravaged when a floodwall failed in 2005. The neighborhood has struggled to recover.

Landrieu said that when Katrina struck New Orleans “it hit everybody equally, but not everybody had the ability to respond equally well.”