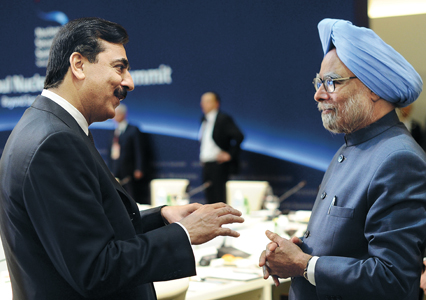 South Asia is still struggling for some semblance of stability following last year’s turmoil. The next two years promise little respite as the effects of clashing political and economic calendars threaten to create further vortices of violence and political battles in the region.

An immediate potential threat: the first anniversary of Osama bin Laden’s killing. Will Al Qaeda or its surrogates commemorate May 2 with a spectacular attack? And who will they target?

Elections also loom in India, Pakistan, and Afghanistan and their timetables may be affecting political action. If recent provincial elections portend the future, Prime Minister Manmohan Singh will need to act fast if he is to leave a legacy of peace with his neighbors. Opening trade with Pakistan was a major step—and Pakistan reciprocated, though with some hesitation—but internal rearguard actions will likely continue to be fought by recalcitrant bureaucrats and intelligence agencies on both sides of the border.

What may seal the deal for Singh is a bold, altruistic move by India, as the bigger economic and military power. As an economist, Singh understands the transformative impact of the creation of a South Asian free trade zone. The regions of India that abut Pakistan would profit immediately and immensely from opening up the entire border to the movement of goods and people and from the creation of common infrastructure to manage transportation and share water and energy resources. Over time the rest of the hinterland on both sides will benefit. Business leaders are ready, willing, and able to go regional. But the window of opportunity is a narrow one. Will the politicians leap through it or dither?

In Pakistan, the very grudging assertion of parliamentary authority and the more rapid one of judicial authority appear to be a welcome shift in the balance of power between the military and the civilian administration. But the business of government is to govern, not to try to stay in power no matter what. With elections looming and the populist threat from new forces such as the Tehreek-e-Insaf rising, the Pakistan Peoples Party-led government will need to exhibit statesmanship at the national and regional levels.

Rather than feeding the base, rentier urges of local and ethnically-oriented politicians to garner support (e.g., by creating the private ATM of regional banks), the government will fare better electorally by solving the problems of food, water, and energy that have made life impossible for the bottom half of Pakistan’s 190 million people. This means convincing its own coalition about the need for structural reforms of the economy, and opening borders with both India and Afghanistan to boost jobs and opportunities from resultant transit trade. President Asif Ali Zardari’s creative thinking behind his pilgrimage to Ajmer should not be a one-off event. Concrete plans for thawing relations need to follow. Exactly what did he pray for at the Indian shrine, absolution or peace?

From the Siachen tragedy there is an opportunity for peace for both Pakistan and India by creating a hallowed ground in that frozen northern outpost as a memorial to the losses suffered by both over the years. Both countries need to act to vacate the region and cease their hostile posturing. Both could then take credit for waging peace. But the key will be how the two governments convince extremist elements in their own ranks and outside that the time for war is over. Again, the time available to both governments is running out. Much sage advice has come out of the pens of pundits and the mouths of politicians on this tragedy and its opportunity for changing mindsets in both Pakistan and India. If former Prime Minister Nawaz Sharif is prepared for unilateral action on Pakistan’s part and Gen. Ashfaq Kayani also favors disengagement and demilitarization of Siachen, then, in the interest of confidence building, India needs to respond positively. This is no time for a political chess game with human pawns on the world’s highest battlefield.

In Afghanistan, President Hamid Karzai appears to be crafting a new deal with the U.S. and may well try to find a way to deal with different parts of the Taliban collective. Talks are ongoing between Kabul and Gulbuddin Hekmatyar. And if the Doha negotiations resume and Pakistan assists the process by releasing Taliban that Kabul wants to participate in the talks, there may well be a chance to create Afghan-led stability in Afghanistan. Otherwise, a disorderly withdrawal of Coalition forces may doom the region to senseless ethnic and sectarian violence again. Karzai is being tempted to accelerate the Afghan elections to unclutter the overfilled calendar for 2014 and create a smoother transition to Afghan sovereignty. But the question remains: does he wish to hand over to a new president or change the Constitution to win yet another term for himself? Afghanistan has many potential leaders from different ethnic groups. Will the richness of that political mosaic triumph over personal ambition?

Friends of the region—the U.S., Turkey, China, Saudi Arabia—can help by putting pressure on all sides and by providing the resources and advice that will help these protagonists overcome their worst fears and get over obstacles of history. Private moral suasion may be the key to getting results rather than public hectoring. The complex set of relationships in the region demand that simultaneous and unselfish actions be taken by different players. Solving this truly multivariate equation demands creativity and boldness. Will politicians in India, Pakistan, and Afghanistan break out of the prison of their political and economic calendars and in the process become statesmen themselves?

Shuja Nawaz is Director of the South Asia Center at the Atlantic Council. This piece was originally published on Newsweek.