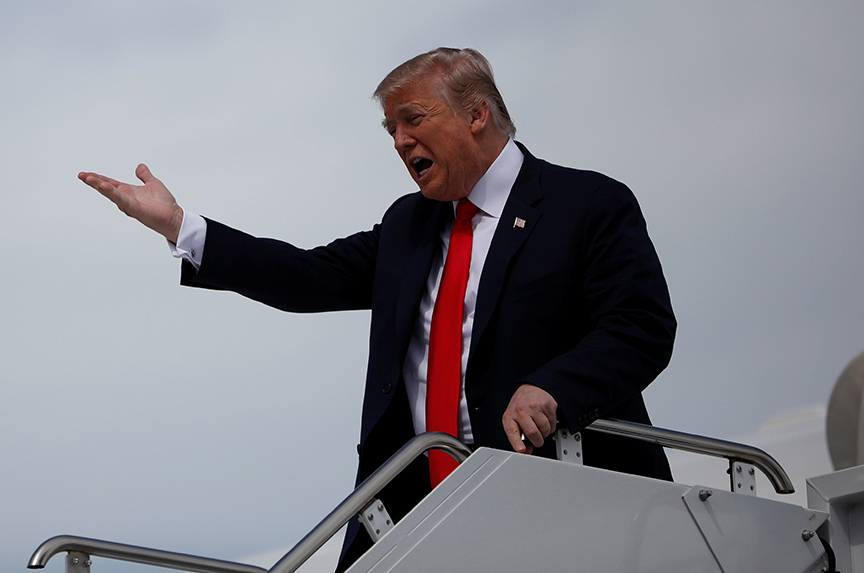 European leaders have vowed to try to salvage the Iran nuclear deal if US President Donald J. Trump carries out his threat to withdraw later this week. But unlike the Paris climate accord and the Trans-Pacific Partnership (TPP) trade deal, the Joint Comprehensive Plan of Action (JCPOA) would have great difficulty surviving without US participation.

The United States’ European and Asian allies would strenuously complain and seek ways to protect oil imports and other trade and investment with Iran if Trump refuses to renew sanctions waivers by May 12. But many companies would be unlikely to risk the hefty fines that violating US sanctions could entail. Already, major multinational firms are putting Iran plans on hold.

Tehran may not react immediately, but the government of Iranian President Hassan Rouhani would be under intense domestic pressure to resume aspects of the nuclear program restricted by the JCPOA. Those that fear that the agreement would allow Iran to get close to a nuclear weapons threshold in a decade or so would have to confront that possibility much sooner.

It is hard to understand why Trump would risk creating a new proliferation crisis at a time when he is preparing for more high-stakes diplomacy with North Korea—a country that, unlike Iran, already has nuclear weapons. Indeed a close congressional ally of the president, Rep. Mark Meadows (R-NC), has said that Trump will punt on Iran again precisely to avoid a negative impact on the upcoming summit with North Korean leader Kim Jong-un. Others, however, have suggested that Trump wants to show Pyongyang how tough he is by blowing up what he has repeatedly derided as a “terrible” deal with Tehran.

Trump’s animosity toward the JCPOA appears to reflect a narcissistic view that he can negotiate a better deal, as well as a desire to undo the chief foreign policy achievement of his predecessor. But the chances for such a renegotiation are slim given the Trump administration’s apparent aversion to direct talks with Iran and reluctance to provide new incentives for deeper Iranian concessions.

A tentative European agreement to put new sanctions on Iran for its missile program and other matters outside the JCPOA’s purview has been dismissed by Iranian officials as appeasement of Trump. Europe has yet to reveal what compensatory incentives it could provide to Iran that would make up for the reluctance of major European banks, for instance, to do business with Iranian counterparts.

The negative consequences of no deal could go beyond proliferation and the likelihood that Saudi Arabia and other regional powers would also seek dual-use nuclear technology. The Middle East and South Asia are rife with conventional conflicts that would only get worse if Iran feels compelled to retaliate in a non-nuclear arena to a US withdrawal from the JCPOA.

Already, Iran has set the Arab world on edge through its support for Shi’ite militias in Iraq and Syria as well as its long-standing collaboration with Hezbollah in Lebanon and newer alliance with Yemen’s Houthis. US forces are exposed, as well, in Afghanistan, where Iran has established links with some Taliban factions as a hedge against the rise of the Islamic State group.

Retaliation could also come through diplomatic and political means. What if the “Conquest” party of Iran-backed Shi’ite militias, led by Badr Brigade chief Hadi al-Ameri, takes power after Iraqi parliamentary elections or simply plays kingmaker to prevent another term for the more neutral current prime minister, Haider al-Abadi? Coincidentally, Iraqis vote on May 12, the same day as the JCPOA sanctions waiver deadline.

The United States has already declared an end to combat operations in Iraq, following the defeat of the Islamic State in Mosul. A more pro-Iranian government in Baghdad could demand the exit of the 5,000 or so remaining US troops, arguing that Iran can provide any needed external assistance to prevent Sunni terrorists from regrouping.

With the Trump administration unwilling to commit more forces to Syria and eager to withdraw the 2,000 Americans still there, Iran’s influence in that country is also likely to grow. And despite the reported participation of some US forces in Yemen against the Houthis, that three-year-old conflict is no closer to a Saudi-Emirati victory. The United States has also failed to convince Saudi Arabia and the United Arab Emirates to heal their counterproductive breach with Qatar.

Apart from some Saudis and Emiratis and Israeli Prime Minister Benjamin Netanyahu, the JCPOA is strongly supported around the world. Ironically, as Trump has kept up his assault on the agreement, it has also become more popular among Americans—both ordinary people and foreign policy experts.

JCPOA critics, including former CIA Director Michael Hayden and former Secretary of State Condoleezza Rice, have recently said that they would stay in the deal. Hayden noted,  “Iran is further away from a weapon with this deal than they would be without it,” in part because of the intrusive verification measures in the JCPOA.

Rice told the Council on Foreign Relations on May 2 that she would stay in the deal to avoid further inflaming US relations with Europe, already strained because of threatened new tariffs as well as US withdrawal from the Paris agreement and pressure for more European defense spending.

If Trump does carry out his threats to withdraw, as Rice also noted, the world will not end on May 13. Reinstating US sanctions is a complicated process and the Trump administration may refrain from implementing them immediately to give  more time for diplomacy.

The uncertainty Trump has cast over the JCPOA since his inauguration has already deprived Iran of many of the economic benefits it had anticipated. For the United States to quit now would reduce, not increase US leverage and undermine sanctions as an alternative to the use of military force.

China, a rising great power, would likely be the biggest economic beneficiary and Iran’s strategic alliance with Russia would also deepen. The price of oil, already going up because of the impending sanctions deadline, would rise further, increasing gasoline prices and cancelling out the benefits of the Trump tax cuts for middle and lower-income Americans.

So, there is no good reason for the United States to withdraw now, with no alternative in hand. Perhaps the president will listen to US allies and reluctantly concur. In any event, the decision is his and the consequences will also be his responsibility.

Barbara Slavin is the director of the Future of Iran Initiative at the Atlantic Council. Follow her on Twitter @barbaraslavin1.

Image: US President Donald J. Trump tweeted on May 7 that he would announce his decision on whether to extend a sanctions waiver on Iran at the White House in Washington on May 8. (Reuters/Aaron P. Bernstein)