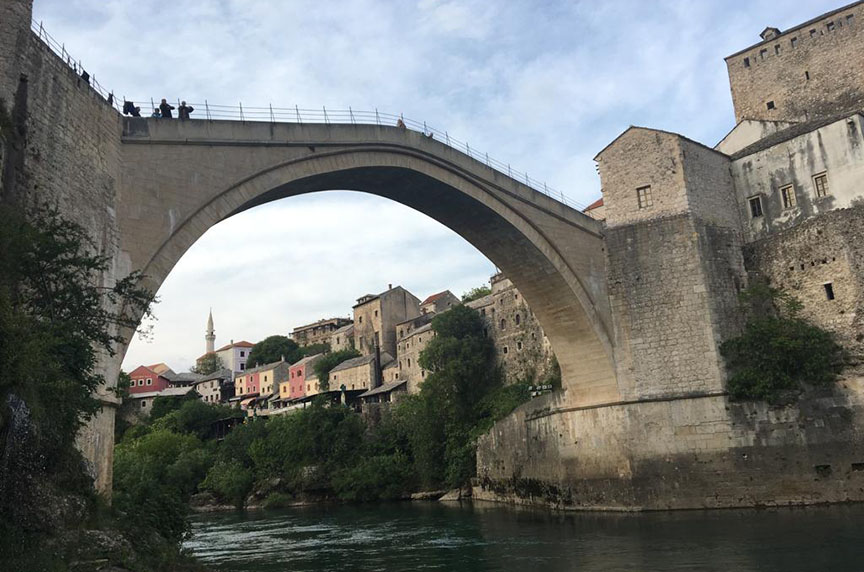 Last week, Member of the European Parliament (MEP) Zeljana Zovko appealed through the Atlantic Council’s New Atlanticist blog to the US administration for greater engagement on the politically contentious issue of electoral reform in Bosnia and Herzegovina (BiH), as closed-door negotiations between political parties continue. As a former BiH diplomat and an elected MEP from the Croatian wing of a BiH party that is at the core of the negotiation process, Zovko has put forward this party’s political argument for the further ethnicization of the electoral system.

The first thing to keep in mind when discussing the BiH’s electoral laws is that the existing system is already strongly tilted in favor of ethnic parties and against those that seek to represent all BiH citizens irrespective of their ethno-religious prefix. Bosnia’s complex power-sharing system provides ethnic politicians with numerous mechanisms to block legislative proposals that imperil their power, including the European Union (EU)-sponsored reforms.

This explains why, apart from amending previously adopted laws, Bosnia’s parliament did not adopt a single piece of new legislation during the whole of last year.

An initiative proposed by the Croatian Democratic Union of Bosnia and Herzegovina (HDZ) aims to push this system even further. One result would be narrowing of political pluralism and further blockages of the legislative process. The HDZ would increasingly become the only political option available to Croats in BiH.

The other would be further erosion of the democratic rights of citizens. The HDZ and Zovko claim that this is all about ensuring fair representation of BIH Croats. Yet the proposal HDZ is pushing for would leave large numbers of Croats from Central Bosnia without any ethnic representation at the Federation of Bosnia and Herzegovina (FBiH) and state level.

For those interested in a more detailed explanation of the HDZ initiative, the key points can be summarized as follows:

Two-thirds of BiH citizens who identify themselves as Bosnian Croats live in four cantons of Herzegovina and Posavina regions, which share a border with Croatia. Herzegovina region is relatively ethnically homogenous, having been cleansed in the 1990s of many Serbs and Bosniaks by Bosnian Croat paramilitaries supported by Franjo Tuđman’s regime in Zagreb.

About one-third of the Bosnian Croats live in the remaining six cantons, which tend to be more multiethnic and spread across Central Bosnia. The Croats in those areas are traditionally more committed to the idea of a multiethnic BiH.

Pushing for a maximalist interpretation of a Constitutional Court ruling on the election law in the Croat-Bosniak entity (FBiH), the HDZ is pursuing a two-pronged strategy whose ultimate aim is to consolidate power in different institutions and levels of government.

First, on the parliamentary elections, the HDZ is pursuing what is in effect a gerrymandering strategy that would give more weight to the votes of Croats who live in HDZ-dominated cantons at the cost of the votes of Croats in Central Bosnia. The majority of these Croats would be disenfranchised, as the HDZ proposal would leave them without representation in the lower chambers of entity and state parliaments

Additional votes from the HDZ-dominated cantons would enable the party to fully control the Croat caucus in the lower house of the FBiH Parliamentary Assembly. The HDZ already controls two-thirds of the seats in this caucus. Having even more seats would give them full control over important decisions made in the entity and state government.

For example, it would put the HDZ in position to control all legislation in the FBiH entity and block the appointment of its president and the vice president. It could also influence the establishment of the Croat caucus in the Parliamentary Assembly of BIH, gaining control of the legislative process at the central level of government.

The EU cannot ignore the nine-year-long non-implementation of the Sejdić-Finci decision if it opens up the presidency package. It, therefore, prefers to leave it closed for now. Which is presumably why Zovko is turning to the United States for help.

In concluding her piece, Zovko argues for the “federalization” of BiH as a reasonable middle solution between the extremes of centralization and decentralization. In fact, the country is already heavily decentralized, with central decision-making requiring consensus among the three main groups. “Federalization” in the jargon of the HDZ is a euphemism for the creation of a third entity and further internal division of BiH into ethnic enclaves.

To put all this in a comparative perspective: if the system the HDZ is pushing for had existed in Macedonia, its prime minister, Zoran Zaev, would not have been able to form the reformist government that the EU has as a partner today. Zaev’s party won enough votes because all citizens of Macedonia, including, crucially, 30-40,000 Albanians, were able to choose their party irrespective of “ethnic” prefix.

The HDZ is seeking to push Bosnia irreversibly in the opposite direction, eliminating the few remaining cross-ethnic voting options for BiH citizens. Like former Macedonian Prime Minister Nikola Gruevski, HDZ leader Dragan Čović claims that any win without an ethnic majority is illegitimate.

Unfortunately, we’ve been here before. Six years ago, the electoral provisions of the city of Mostar (where power is shared between the HDZ and the Party of Democratic Action, SDA) were struck down by the BiH Constitutional Court. To date, elections have not been held in Mostar, while the HDZ and the SDA, the two parties responsible for the paralysis, continue to enjoy an indefinite term in office.

Similar to the case of Mostar, the BiH Constitutional Court has nullified the provisions of the election law for the FBiH House of Peoples. The paralysis which the FBiH government is facing, involves the same players, only a potentially more sinister scenario. Failure to form the government at the FBiH level and no functioning parliament at the BiH level could be used by the HDZ to legitimize its return to Herzeg-Bosna autonomy. The SDA could live with this deal as long as it gave them their Muslim enclave. All this is happening in an environment where Bosnian Serb president of Republika Srpska Milorad Dodik’s appetite for secession is coupled with the announcement that he will fully arm his police and create reservist forces.

We may no longer be dealing with an issue of legalistic details on Bosnia’s electoral law—we could be dealing with the question of survival of BiH as a state. Ultimately, what happens in October be a political decision by the HDZ based on its power calculations, external pressure being one of them.

This is why the United States and the EU should intensify their engagement to find a solution to BiH´s current electoral dilemma. But any reform should seek to make the country more functional and cohesive, rather than support proposals that would further ethnic divisions. If they are unable or unwilling to do so, they should resort to the constitutional mechanism put in place to safeguard the Dayton Peace Agreement: the Office of the High Representative.

Majda Ruge is a fellow at the Foreign Policy Institute at the Johns Hopkins University’s School of Advanced International Studies.