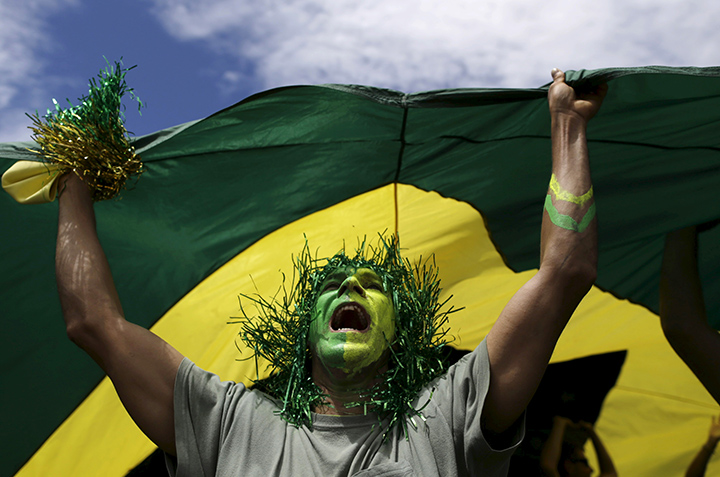 Demonstrators with a Brazilian flag protest against former Brazilian President Luiz Inácio Lula da Silva in front of his apartment in Sao Bernardo do Campo, Brazil, on March 4. (Reuters/Paulo Whitaker)

Accountability in the region creates space for safer investments

Odebrecht was once synonymous with Latin America’s most ambitious public works projects. Today, those who hear the name think only of the web of malfeasance that has engulfed the region and continues to extend beyond the continent. But, as negative as these new revelations may seem, there is light at the end of the tunnel, and opportunities along the way. The pragmatic efforts of police and judicial actors show that some countries in the region are ready to face impunity head on. If Latin America can continue down the road to accountability, US investors could be the first to benefit.

What started as a money laundering investigation in Brazil in 2014, the case of Odebrecht, Brazil’s largest construction company, has today developed into the deepest corruption scandal Latin America has seen, with top leaders implicated. Just this week, major newspapers reported the Brazilian Supreme Court has authorized investigations into more than one hundred Brazilian politicians. In December, Odebrecht pleaded guilty in a US court to paying nearly $800 million in bribes to win business in more than ten countries, dating back to the early 2000s. The company was subsequently slapped with a record fine of $3.5 billion by the Brazilian, US, and Swiss judiciaries in December. It seems the times are changing.

In a nearly unprecedented domino effect, the scandal has extended to over a dozen countries in the region. In Peru, former President Alejandro Toledo is being sought for bribery and money laundering after allegedly pocketing $20 million from the Brazilian company. In Colombia, President Juan Manuel Santos’ campaign is accused of receiving Odebrecht funds, and former deputy transport minister, Gabriel García, has admitted to taking $6.5 million in bribes. In one way or another, Odebrecht bribes have surfaced from Mexico to Angola.

But, this scandal also generates opportunity. Exposure on this scale could not have happened without the strong judicial mechanisms being implemented in Brazil and in much of the region. Judges from Brazil to Guatemala have sunk their teeth and refused to let go, arresting and charging major political figures and holding the most elite of perpetrators accountable. In Brazil, Marcelo Odebrecht, the CEO of Odebrecht, was sentenced to nineteen years in prison, and Eduardo Cunha, the former speaker of Brazil’s lower house of Congress, was found guilty of corruption and money laundering and received a fifteen-year jail sentence.

Empowered, civil society has emerged to push for visibility and to fight impunity. The Odebrecht scandal, it seems, has shed light on an overarching changing social and political consciousness in Brazil and in Latin America, one that refuses to sweep these crimes under the rug. It could be argued the massive scandal signifies the growing pains of a region on its path to reform.

What does this mean for the United States? As outlined in the newest Adrienne Arsht Latin America Center publication, Beyond the Headlines: A Strategy for US Engagement with Latin America in the Trump Era, engagement with Latin America provides a wealth of opportunities for the United States. As the new US administration considers ways to ensure national security and prosperity, expanding US private-sector investments in the region and boosting US support for anti-impunity efforts in Latin America are strategic paths forward. For US stakeholders, the aftereffect of prosecutions in Brazil and other Latin American countries is likely to signify a decrease in corruption, making the environment less risky for foreign direct investment in the long run. Present uncertainties aside, corruption investigations are sure to level the investment playing field and stabilize the processes for project procurement and contracting in Brazil, if not in most countries under scrutiny.

Corruption scandals are nothing new in Latin America, but Odebrecht’s fallout is a turning point for the region, as countries have proven increasingly willing and capable of effective justice and reform.

Roberta Braga is a program assistant in the Atlantic Council’s Adrienne Arsht Latin America Center. You can follow her on Twitter @RobertaSBraga