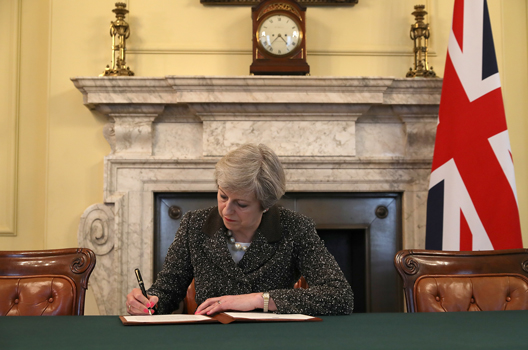 With the United Kingdom formally starting the process of leaving the European Union on March 29, the Atlantic Council is launching a series of blog posts that will track the course of the Brexit negotiations and the many challenges they pose for the future of US-UK relations.

By formally notifying the European Union that it plans to leave, London has effectively handed over control of its exit negotiations to those on the other side of the table—the EU institutions and the remaining twenty-seven member states. In diplomatic terms, the United Kingdom has become the demandeur, the one asking for favors.

Since the referendum last June that endorsed the country’s departure from the EU, the UK has been engaged in an often-angry debate over how far it should actually disentangle itself from EU regulations and the key components of the Union, notably its single market and its customs union.

Many Britons have seemed to think they can themselves define their new relationship with their former partners, without fully understanding that the other EU countries will largely dictate the outcome, and that the UK will have to make major concessions to achieve its aims.

From now on, however, it will be the EU that sets the pace, and decides what it is prepared to offer—often after vigorous and prolonged internal discussions.

The exit negotiations will be quite unlike the British entry negotiation nearly half a century ago, when both sides agreed on the desired final goal—the incorporation of the UK into the then European Economic Community. Now, the UK wants an outcome that the others have not sought and have little incentive to rush or make easy.

The other twenty-seven EU member states hope to avoid a damaging divorce, and would like to retain good post-Brexit relations with the UK. But their overriding objective is to maintain the renewed unity pledged at the EU’s 60th birthday party in Rome on March 25, and keep the EU steady as it takes arms against a sea of other troubles. These include depressingly low growth, a still vulnerable euro, spreading anti-EU national populism, a further potential flood of refugees, and a menacing Russia. Brexit will be just one item on the agenda.

Article 50 of the Lisbon Treaty, which the UK triggered on March 29, provides for two years of exit negotiations, but the other twenty-seven member states are not obliged to move fast. They will hold a summit April 29 to set broad political guidelines for their joint negotiating position, the details of which remain to be agreed.

They will want to absorb the results of national elections in France in April/May and in Germany in September.  That could leave little more than a year for serious negotiations, given that the EU wants to start the lengthy, complicated process of ratifying any deal in October 2018—and that may cover just the plan for the UK’s departure, possibly including interim trade provisions, not its long-term future relations with the EU.

The broader point is that the closer the talks get to the two-year deadline, the weaker becomes the British negotiating position, and the stronger that of the EU.  If there is no deal by March 29, 2019, (unless the deadline is unanimously extended) the UK will simply crash out of all EU treaties and other arrangements—completely severing its privileged trade, legal, and economic ties to its neighbors overnight.

Michel Barnier, the EU’s chief Brexit negotiator, has warned that the many immediate consequences for the UK could include suspension of British nuclear fuel imports, long truck lines at Dover, and “serious disruption” of air traffic. And that’s just on day one.

Such could also be the end result if British Prime Minister Theresa May were to fulfill and stick to her implicit threat to walk away if a satisfactory deal is not forthcoming—in a policy statement in January she warned that “No deal is better than a bad deal.”

That is seen as a real possibility, though not a probability, in London. Even raising the threat in the negotiations would be a tactic of desperation that would enrage the twenty-seven, and May is now reported to be backing away from it. Brinkmanship is not normally the best way for demandeurs to get what they want.

Image: British Prime Minister Theresa May in London on March 28 signed the official letter to European Council President Donald Tusk invoking Article 50 of the Lisbon Treaty, indicating the United Kingdom’s intention to leave the European Union. After holding a referendum in June 2016, the United Kingdom voted to leave the European Union. The signing of Article 50 officially triggers that process. (Reuters/Christopher Furlong)