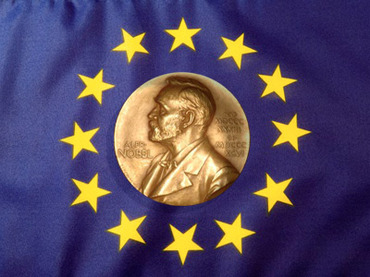 It is one of those surreal European days. The EU has just formally accepted the Nobel Peace Prize when the sad truth is that far from multiplying European power and influence in the world the EU these days is diminishing it.

The surrealism is particularly pointed because below me Jeanne d’Arc (Joan of Arc) sits astride a charger cloaked in the finest armor looking west towards the English she sought to kick out of Europe. Here in Blois English and French history meets on the banks of the Loire, that most royal blue of French rivers, symbolized by a small statue of a small woman born six hundred years ago in 1412 who changed the course of European history. Europe is clearly approaching yet another historical bifurcation and being Europeans there is a tendency to think it is the only show in town. It is not. What is happening in the world beyond Europe is what is really interesting and there Europe is the past.

In some ways the Prize marks the end of the European world. Imagine a map centered not on the Greenwich meridian, but on the International Dateline. The line runs not across the Atlantic but the Pacific from the Arctic to the Antarctic between China on one side and America on the other. To its east lies the old West; to its west lies the new East. That is the new fault-line in global politics, the new Mackinderesque geographical pivot around which power will be organized. Unfortunately, Europe’s inability to confront this new order is day-by-day driving the Old Continent inexorably towards a strategic cliff; a decisive moment of decline in which peace and impotence are interpreted as one and the same.

Danger is everywhere on this map and it is all connected. The unseemly growth of mighty but unstable China and its Asian neighbors; the slow and tragic collapse of middle eastern states; a fast-growing world population competing for ever scarcer food and water; the endemic intolerance and corruption of powerful near-neighbor European elites; the desperate energy competition between the consumptive oligarchies and the consumptive democracies; the new/ideological struggles between the children of the Book and between those of no ‘Book’; the merger of mass destructive technologies with ideology; and old-fashioned state calculation. Indeed, this is the very stuff of the twenty-first century.

And where is Europe on this map? Indeed, whilst the next decade will mark the critical formative crucible of a new world order, Europe will be in a self-imposed strategic nowhere with NATO and the EU left hanging in the no man’s land between rhetoric and reality.

Can Europe be saved from an impotent future? Britain and France are the only two powers capable of re-injecting some semblance of strategic reality into an EU/Europe which either seems to think it can opt-out of global change or simply does not want to play by the power rules the world is imposing. However, Britain and France are moving rapidly in opposite directions. France sees itself at the center of Europe’s interminable struggle to create/save itself from itself. Britain has no desire to be in such a place and yet the EU prevents it from playing the role of balancer it afforded Europe in the centuries following Jeanne d’Arc. Inevitably, the very political fallout of this fundamental divide is beginning to creep into the strategic defense relationship. Sadly, in spite of high profile military exercises the much-lauded 2010 Franco-British Defense and Security Treaty is beginning to run out of political steam.

This time of year the Loire belies its age and skips youthfully in full flow on its way to the Atlantic. Channeling turbulence will be critical if London and Paris are to save their vital strategic defense partnership. It may seem counter-intuitive but if the strategic conundrums being mapped out for both Britain and France are to be managed the treaty becomes more not less important. The British must align with a new strategic bloc around the Americans and yet preserve key European ties above and beyond the EU. France’s somehow has to get other Europeans to think anew about the global balance of power, even if European integration was meant to be the eternal antidote to such power politics.

If Britain and France cannot find common cause then the new forces of global change will help drive Britain beyond the EU. This will be not only because of a level of political integration that might make sense to the descendants of Colbert but never to those of Locke or Mill, but because the EU will have lost all contact with strategic reality. Indeed, it is the retreat of EU leaders into political and strategic fantasy that is doing the greatest harm to Europe’s future by disconnecting European security from world security and which makes today’s award seem a little preposterous.

Jeanne d’Arc once said, “Of the love or hatred God has for the English, I know nothing, but I do know that they will all be thrown out of France, except those who die there”. Maybe! So, well done EU (I suppose that means me but watching leaders drink champagne on my behalf always seems a tad distasteful) but what about the world and what about tomorrow?