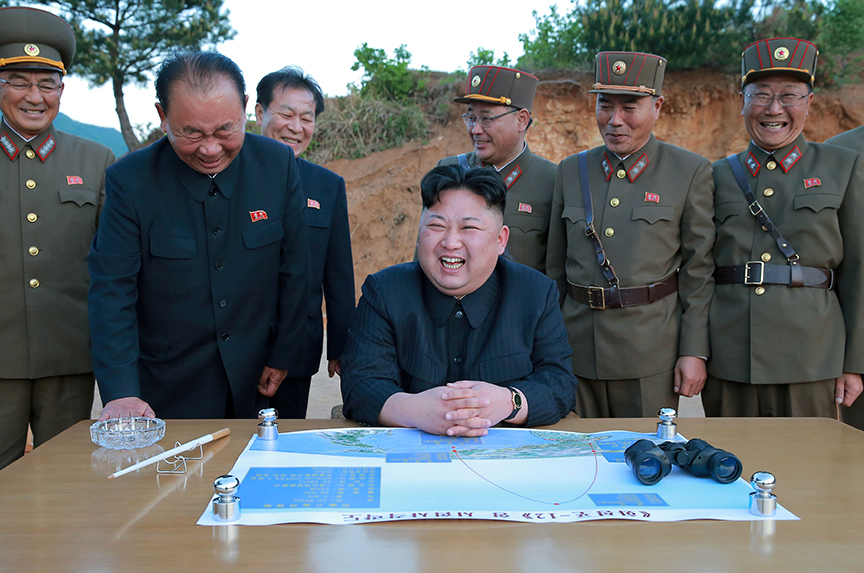 North Korean leader Kim Jong-un visited war graves on the 64th anniversary of the armistice which ended the Korean War in this undated photo released on July 28 by North Korea’s Korean Central News Agency in Pyongyang. South Korea and the Pentagon confirmed that North Korea had launched an intercontinental ballistic missile on July 28. (KCNA/via Reuters)

The Pentagon has confirmed that North Korea launched an intercontinental ballistic missile on July 28. The missile, which landed in the sea off the Japanese coast, flew higher and for longer than the one North Korea tested on July 4. This means it could hit cities in the United States.

Here is what Atlantic Council analysts had to say about this development.

This continues North Korea’s dramatic progress on their single-minded march to acquire a nuclear-capable ICBM capability which they could threaten to use to target the United States and deter US security cooperation with its close Asian allies.

This proves again that status quo policies are not an option. Once it is assured that it has a “nuclear shield,” North Korea is likely to act much more aggressively in every other area of its foreign and military policies.

Thus, among several other measures detailed in the recent “Atlantic Council Memo to the President” on North Korea, the United States needs to work closely with its allies to develop a robust package of military enhancements to dramatically realign US and allied military posture for this very different, more dangerous security landscape.

The United States also needs to work very closely with China to take new measures to convince North Korea to come to the bargaining table with the goal of reducing and then eliminating its nuclear and missile capabilities.

Kim Jong-un’s launching of another ICBM must be seen as an existential threat given that North Korea is the only totalitarian state with a growing nuclear arsenal. It is absolutely essential for South Korea, Japan, and the United States to ensure there is no daylight between them and [South Korean] President Moon [Jae-in] has to dial back his well-intentioned but untimely desire to engage with North Korea. South Korea has become so used to North Korea’s threats that it has become much too complacent. This is not a conservative or a progressive issue: it strikes at the very heart of South Korea’s, and for that matter Japanese, security.

It’s also crucial to wake up from the myth that China is pulling its weight to constrain North Korea. So long as Beijing coddles North Korea as a strategic buffet albeit a problematic one, China has every reason to keep Kim Jong-un in power. This is why US leadership is so vital. But with the ongoing power struggle within the White House and a Congress that is in deep discord over health care and other major domestic issues as well as inattention to Asia and European security (especially key ties with US allies), the two countries that are benefiting from this vacuum are China and North Korea.

Kim’ s latest ICBM test must also lay to rest the long-standing belief of the left in South Korea and the United States that North Korea will give up its nuclear arsenal provided that it receives assurances for regime survival and economic incentives. Kim Jong-un’s regime survival depends 100 percent on internal contradictions since the Korean Worker’s Party and the Korean People’s Army leadership will be the ones who will remove him from power. It won’t happen tomorrow but an internal coup against Kim is the most likely outcome for the Kim dynasty, one that is the world’s only communist dynasty and the last Stalinist state.

Seoul, Tokyo, and Washington must wake up to a new strategic threat and speak and act with one voice towards North Korea and, especially, China. The world can no longer condone China’s embracement of North Korea.