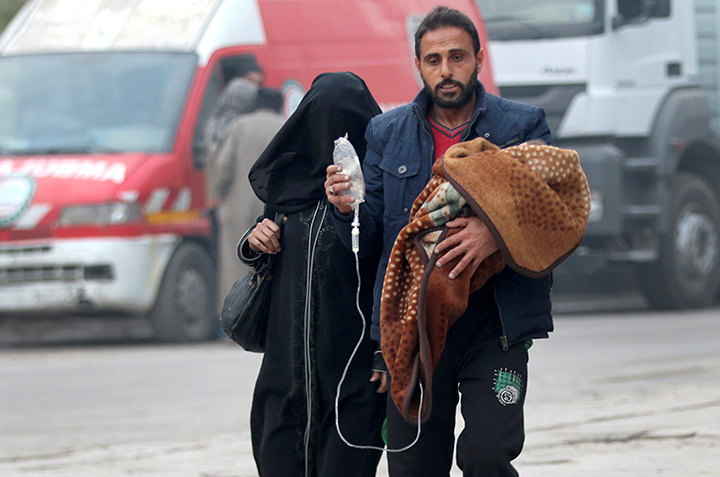 The fall of Aleppo to the Russian-backed Syrian army marks the turning of the tide in the Syrian civil war, and leaves the remaining rebels and besieged citizens with little safe recourse from the advance of government forces, according to an Atlantic Council expert.

“I think this war of frontlines where the opposition tries to take territory and hold territory is finished,” said Faysal Itani, a resident senior fellow at the Atlantic Council’s Rafik Hariri Center for the Middle East. He added, “the momentum is clearly moving against the opposition, and the regime is setting itself up to go into the remaining opposition pockets and areas to basically break the insurgency as a strategic threat to regime security.”

On December 14, Russia announced the end of the battle for Aleppo, as Syrian rebels agreed to cede their remaining territory to Bashar al-Assad’s regime.

Itani described how an initial attempt to broker a ceasefire fell apart as civilians and militants alike attempted to escape amidst ongoing shelling in the city. “That ceasefire fell apart and now new conditions have been added by Assad and Iran for the evacuation of citizens inside East Aleppo…so here we are for now and the fighting is ongoing,” he said. Assad has claimed that there is no chance for truce in Aleppo.

In a piece for the New York Times, Itani wrote: “the opposition, Russia, Turkey, and the United States will continue to negotiate over Aleppo’s fate while Mr. Assad shapes it.” He said in an interview with the New Atlanticist that the United States has no tangible influence on the ground to alleviate the humanitarian crisis. Ultimately, Itani said, “the only way out of this humanitarian crisis is for there to be some areas of this country where people can be safe.” He called for the creation of safe zones near the Turkish border.

However, with regard to Idlib, a province in northwestern Syria which remains a rebel stronghold, Itani sees little hope for rebels there. Due to the presence of an al-Qaeda affiliate, Jabat Fateh al-Sham, Itani does not expect “an international umbrella protecting an area controlled by an enemy of the United States.”

“If they go to Idlib, then they’re going to be stuck in this sort of bottled up rebel stronghold that the regime is going to go after, very hard, and I think is going to be a disaster,” he said.

Faysal Itani spoke in an interview with the New Atlanticist’s Rachel Ansley. Here excerpts from our interview.

Q: What does the fall of Aleppo mean in the context of the Syrian civil war?

Itani: This is the culmination of something that’s been going on since the Russians intervened in Syria about a year ago. What this means in the context of the war is I think this war of frontlines where the opposition tries to take territory and hold territory is finished. The momentum is clearly moving against the opposition, and the regime is setting itself up to go into the remaining opposition pockets and areas to basically break the insurgency as a strategic threat to regime security.

Q: The United Nations’ humanitarian chief has said that eastern Aleppo is turning into “one giant graveyard.” What is the situation on the ground?

Itani: Initially there was a reported wave of disappearances and killings after it became clear that the eastern part of the city was going to fall. Then, there was some sort of negotiation process that led to essentially a ceasefire arrangement [on December 13] that was supposed to allow persons inside the city to evacuate. That ceasefire fell apart and now new conditions have been added by Assad and Iran for the evacuation of citizens inside East Aleppo, one of them being the lifting of a siege that the rebels have imposed elsewhere on two pro-regime villages—Fuah and Kefraya. So here we are for now and the fighting is ongoing.

Q: Does the United States have any leverage to help the besieged citizens of Aleppo?

Itani: Not at present, no. I think clearly the Russians, the Iranians, and Assad have calculated that there isn’t any military risk to continuing the operation in Aleppo. They’ve presented the United States with a fait accompli. The city has already essentially fallen; the United States can complain about the humanitarian problems and the displacement of persons, but they have absolutely no tools on the ground to change that. The militias that they were backing inside this area have been overwhelmed—crushed, more or less. The other militias are people we can’t work with, and our allies regionally, Turkey in this case most importantly, is not focused on Aleppo city, it’s focused on fighting the Kurds further east of the city, so there goes another point of leverage.

Q: Do you see that changing at all?

Itani: Not under this [Obama] administration, no. It’s always dangerous to speculate what the next administration’s going to do, but I can imagine a scenario under which there is Russian and US cooperation against [the Islamic State of Iraq and al-Sham]. But over the question of Aleppo and the regime rebel war, [there could be] a meeting of minds between the Russians and the Americans to impose some sort of freeze or cessation of hostilities, in general, between the regime and the rebels. If this is backed by a credible threat of force from either side, I can see this stopping at least. Aleppo will be gone, but the rest of Syria will be in better shape.

Q: What should the international community be doing to address this humanitarian crisis?

Itani: The only way out of this humanitarian crisis is for there to be some areas of this country where people can be safe. The people who are in the opposition-held territories are not safe in regime territory; they’re viewed as traitors and collaborators, and as a long-term threat. That’s why they’re being displaced. They’re being displaced into other areas where their safety is highly questionable, for example Idlib or the Aleppo countryside, perhaps the south of the country. The geography of the fighting changes. These places need to be made into safe zones, frankly. Ideally, it will be done with the cooperation of the Russians, or not, but I don’t see any other way in which these people, these internal refugees, the displaced, can be protected from violence.

Q: You have predicted that Assad will next set his sights on retaking Idlib province. What can the international community do to prevent Idlib from becoming the next Aleppo?

Itani: It’s very difficult for me to imagine a scenario in which Idlib would fall under some sort of international protection, partly because it’s so important to the regime, and they’re going to go after it hard. Partly because it’s dominated by a jihadist group called Jabat Fateh al-Sham, which is an al Qaeda affiliate, I don’t see an international umbrella protecting an area controlled by an enemy of the United States. That said, I do think it’s possible to create a sort of small border buffer zone, that Turkey would then police, that would allow some people to escape this situation and be in relative safety. But the province as a whole? No, I don’t see a way out for it.

Q: How will the fall of Aleppo affect the ongoing refugee crisis?

Itani: We know that these people are going to be forced to leave, either by circumstance or by the regime. No one is going to want to go to the regime areas, for obvious reasons, and no one can live in East Aleppo because it’s not livable. The question of how the [refugee] crisis is affected depends on where they’re sent or where they choose to go, depending on the terms [of a ceasefire]. They could go to Idlib, but, as I said, Idlib is in trouble. They could go to the part of Aleppo province that is controlled by Turkish proxies and essentially has a Turkish security umbrella. If they go there, conceivably they could stay if the right infrastructure and services are set up. It would become one big refugee zone in addition to the indigenous population. But that’s by no means completely safe yet. If they go to Idlib, then they’re going to be stuck in this sort of bottled up rebel stronghold that the regime is going to go after, very hard, and I think is going to be a disaster.

Image: A man carried a child with an IV drip as he fled deeper into the remaining rebel-held areas of Aleppo, Syria, on December 12. (Reuters/Abdalrhman Ismail)