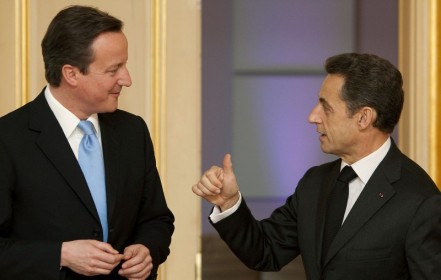 I was in London this week and two things happened that suggest l’albion perfide might be about to do the dirty on both America and France. First, in high-level meetings in the Ministry of Defence British officials confirmed that the disastrous 2010 Strategic Security and Defence Review (Strategic Pretence and Impecunity Review) had been the right thing to do and was on track. Oh, please. Second, unattributed briefings to senior members of the Commentariat (a self-formed, self-mutating, self-important, and self-imbibing group of strategic ‘thinkers’) urged ‘caution’ about the value of the 2010 Franco-British Security and Defence Treaty. Oh, please again.

London, as ever, has got it diametrically wrong – sacrificing, as ever, the medium-term for the short-term. Which brings me to the Franglosphere (no, it is not a bad BBC science fiction shocker). Far from dissing it, London should be investing in it. Indeed, it could mark a new trirectoire of critical American, British and French leadership as Iraq, Afghanistan and now Libya begin to shake down. Such leadership could in time bring both NATO and EU back from the abyss of irrelevance over which both are hovering.

Sitting in one of those delightful central London squares dusted by the spring sunshine doing an interview for BBC Radio (I suppose that is what they mean by outside broadcast) my mind short-circuited and out sprang an idea. The gap between the strategic pretence that is NATO and the EU and the true alignment of security and defence power is fast becoming so embarrassing that no amount of institutional wall-paper can now paper over the cracks.

The result? Coalitions are fast replacing alliances as the place where real security business is done. Institutions are fast becoming places where the complacently secure try to prevent the dangerously insecure from doing what they must to protect their citizens. This is not simply inconvenient, it is downright dangerous.

In the Atlantic Alliance today we have four categories of power and weakness: America – the erstwhile superpower; Britain and France – the ersatz pocket superpowers; Germany, Italy and Poland – the pretend weak powers; a ‘proud to be weak’ group of dodgy powers with a propensity for bicycles, and what I call the McEnroe Six – the ‘you cannot be serious’ ‘powers’. The exact composition of the Six I will leave to your imagination.

Which brings me to the where are we ‘at’ over Libya question? Well, we are at the ‘go all the way or simply go away’ point. At least London has understood that, although the response is, shall we say, a tad arcane. As with all such moments the British are engaged in one of those semantic debates in which the British official elite specialise and which make London look like the setting for one of those old Peter Sellers movies. Ruritania was the place, I think.

This particular iteration concerns the balance to be struck between the Cameron, Obama, Sarkozy ‘let’s get Gadhaffi’ letter, the meaning of UN Security Council Resolution 1973 and just how far ‘we’ can go, even though ‘we’ have not got much to go much further with. Today, this concerns how many boots have to be on the ground BEFORE there are boots on the ground.

Power of course has its own eloquence. Three of NATO’s twenty-six powers hold over eighty-five percent of the military power. Now, of course, one of them is so primus inter pares that the primus rather embarrasses the pares. That said it is precisely primus inter pares that makes both NATO and the EU look ever more like bureaucracies in search of a pension. Why? Both institutions were created at a time when the ethos of the age was not just to defend against the great power of the ‘other’, but to constrain the great power of the self. In the past such constraint was believed to be necessary due to what was believed (mainly by Americans) to be Europe’s innate tendency to war with itself.

The problem today is that power is also a form of vulnerability. The more powerful one is the more a target one becomes and because of this Europe has found a whole new way to be divided, as well as being lost in a sea of uncertainty. And here is the crunch; differentials in power create profound differentials in strategic perspective. The result is not just free-riding, but too often free-braking and on occasions free back-seat driving by the pretend weak and weak powers. They want to constrain the powerful for fear a) they will be embarrassed domestically; and b) be sucked in to the vulnerability psychosis of the powerful. And yet the complacent seemingly demonstrate little concern for the security needs of the powerful beyond the merely rhetorical. How ‘symbolic’ does commitment have to be before it is not a commitment? Such wobbliness critically undermines the contract at the heart of any alliance that can only function if fueled by real solidarity – the small get the security of the powerful in return for the sharing of responsibilities.

But that is not all. They also want to be washed and fed by the powerful, i.e. getting someone else to buy the ingredients, bake the cake and then eat their bit as well. The great unwashed are of course pretending they are preparing for something – humanitarian operations, peacekeeping etc. etc. But time moves on and nothing much appears. Libya has utterly exposed the sham that is conventional military capabilities in Europe, especially if it is even vaguely hi-tech.

Sadly, the 2010 NATO Strategic Concept gave the McEnroers and friends exactly what they wanted – free defence. Now, the great and not so good had hoped that in return for such protection some of the relatives would pitch in from time to time to help do the washing up. Not a chance – they are too busy sunning themselves on the broad sunlit uplands of strategic self-delusion.

There is of course a caveat (it is impossible to write a piece about European security and defence without referring to caveats. Perhaps I should throw in a Rubicon as well as I am sure something is about to be crossed?). Whatever. In any case, Britain and France must look collectively to their own ersatz pocket super-powerdom and the Franglosphere because if they do not invest in the new alignment they will create an entirely new and dangerous category for themselves – the pretend strong. If that happens both institutions will be little more than homes for the strategically insane. That, I thought, had been the reason for the Franco-British treaty but according to London not.

Now the critical question that ensues is profound; will the Franglosphere serve NATO and the EU or bypass them? That is up to the relatives. But as Shakespeare would have it, there is a rub. We need the Franglosphere precisely because only states can save institutions which are after all tools not ends in themselves. Then maybe, just maybe, America, Britain and France can together inject military backbone into the increasingly invertebrate NATO and EU.

The alternative? Big power will be forced to act independently of institutions. Indeed, if NATO and the EU are only there to get the committed to pay for the security of the recalcitrant that will truly mark the beginning of the end for the age of institutions which the West did so much to create. I thought driving without insurance was illegal.

“What is the sweetest form of death”, Caesar was asked shortly before an interruption in Imperial service; “The kind that comes without warning”.

Get a grip, London!

Professor Julian Lindley-French is a member of the Strategic Advisor’s Group of the Atlantic Council of the US in Washington, Special Professor of Strategic Studies, University of Leiden, Netherlands and Associate Fellow of the Royal Institute of International Affairs, London. This essay first appeared on his personal blog, Lindley-French’s Blog Blast. Photo credit: Getty Images.