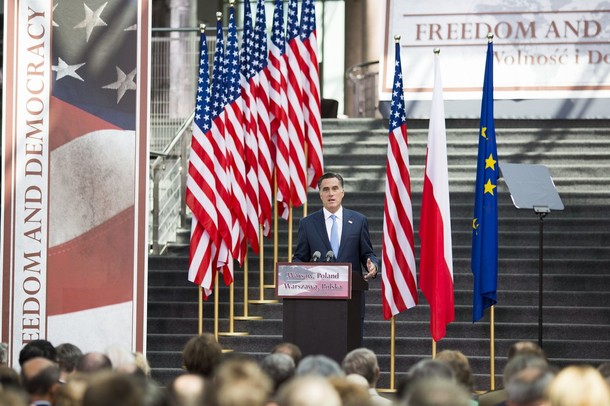 According to both the exit polls and the pre-election polling, President Obama was widely considered better on foreign policy than his Republican opponent. The last time that happened was 1964, when Lyndon Johnson carried 44 states, in part on the message that electing Barry Goldwater would lead to nuclear holocaust.

Obama didn’t win the public’s confidence by giving gifts to urban special interest groups. Rather, he co-opted key parts of the Republican foreign policy agenda, undermining the attacks that have been used against his party since the days of Hubert Humphrey and George McGovern.

Mitt Romney campaigned, like every Republican of the last generation, using the playbook Ronald Reagan successfully used to defeat Jimmy Carter in 1980. That has been decreasingly effective on domestic issues and, now, it’s failed two elections in a row on foreign affairs, too.

Domestically, Republicans are seemingly oblivious to the fact that they’ve won on most of the core issues that Reagan championed. Democrats have all but conceded to Grover Norquist’s demand never to raise tax rates again; meanwhile, Republicans are still running on tax cuts and trying to convince people that even Reagan’s top marginal rate constitutes socialism.

Now, the same thing has happened on foreign policy. Barack Obama basically continued the post-2006 Bush foreign policy. We had a surge in Afghanistan, ramped up drone strikes, and targeted people the president deemed America’s enemies — even if those enemies were American citizens. And, of course, Obama gave the go order to kill bin Laden. All this from a party that Republicans have historically portrayed as weak on national security.

Team Romney nonetheless ran the same campaign Republicans have since at least Nixon’s day, claiming that the Democrats were spineless on foreign policy. Given Obama’s record, the charge of course rang hollow.

In recent years, the dominant faction in the Republican foreign policy establishment since the 9/11 attacks have been the so-called “neoconservatives,” who advocate a policy of vigorous democracy promotion abroad, through military power if necessary, as the best way to promote American national security interests and values. The Iraq War debacle severely damaged this faction’s reputation and even President George W. Bush largely turned away from them after the 2006 midterm defeat in favor of more traditional realist voices like Condoleeza Rice and Robert Gates.

John McCain ran on a neocon platform in 2008 and Mitt Romney paid homage to this cycle by including the likes of John Bolton among his advisors, but was so opaque in his pronouncements that it wasn’t clear that even Romney knew what his foreign policy was. Both lost resoundingly.

The Republican Party needs a new message on foreign policy that is true to the conservative principles of the base and yet has a broad appeal to the American public. It so happens that one already exists, has a proven track record of electoral success, and is only slightly used: the “humble foreign policy” that candidate George W. Bush espoused during the 2000 campaign but abandoned with the Global War on Terror and the Iraq invasion.

Bush’s wisdom during the October 12, 2000 debates is striking in hindsight. “If we’re an arrogant nation,” he warned, “they’ll resent us; if we’re a humble nation, but strong, they’ll welcome us. And our nation stands alone right now in the world in terms of power, and that’s why we’ve got to be humble, and yet project strength in a way that promotes freedom.”

Now, to a large degree, that’s platitude rather than policy prescription. But it’s the right mindset from which to approach policy analysis.

Bush agreed, for example, with the Clinton administration’s actions in the Balkans: “I thought it was in our strategic interests to keep Milosevic in check because of our relations in NATO, and that’s why I took the position I took. I think it’s important for NATO to be strong and confident. I felt like an unchecked Milosevic would harm NATO.”

At the same time, he observed, “I’m worried about over committing our military around the world. I want to be judicious in its use.”

In contrast with Kosovo, Bush declared, “I wouldn’t have sent troops to Haiti. I didn’t think it was a mission worthwhile. It was a nation-building mission. And it was not very successful. It cost us a couple billions of dollars and I’m not sure democracy is any better off in Haiti than it was before.”

More broadly, Bush argued, “I’m not so sure the role of the United States is to go around the world and say, ‘This is the way it’s got to be.’ We can help.  . . . I mean I want to empower people. I want to help people help themselves, not have government tell people what to do. I just don’t think it’s the role of the United States to walk into a country and say, ‘We do it this way; so should you.'”

In short, Bush articulated a foreign policy centered on the national interests of the United States and its allies, one that carefully weighed costs and benefits, and that would be humble in not only its outward face but in its assessment of what the United States could reasonably achieve.  His presidency and the shape of his party’s foreign policy would be much better off had he carried it out.

James Joyner is managing editor at the Council. This piece was first published in the Atlantic.