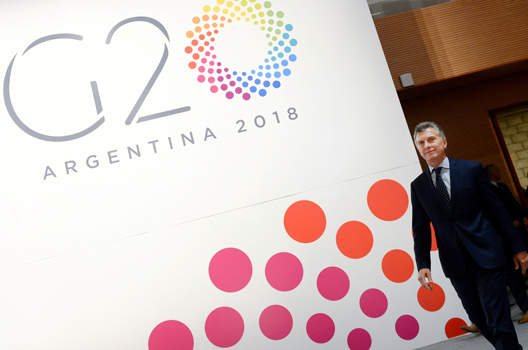 US President Donald J. Trump and several other world leaders are gathering in Buenos Aires, Argentina, for the 2018 G20 Leaders’ Summit. Here’s a quick look at the organization and the upcoming summit.

Argentina currently holds the annually rotating presidency of the G20, which is why it is hosting this year’s Leaders’ Summit. The current G20 president works in a “troika” with the previous and the following presidencies, which in this case are Germany and Japan, respectively. The presidency is responsible for hosting G20 meetings throughout the year. It can also invite non-member countries to attend meetings at its own discretion; this year, Argentina elected to invite Chile and the Netherlands.

Countries that chair key regional groups are also invited to G20 summits, such as Rwanda, Singapore, Senegal, and Jamaica this year. Spain also holds a permanent invitation to all G20 meetings. Throughout the year, government ministers, foreign ministry officials, central bank governors, and world leaders hold meetings to address and discuss global economic issues in detail. All of these meetings and negotiations culminate at the end of the year in a Leaders’ Summit.

What Happens at a Leaders’ Summit?

The G20 Leaders’ Summit is the most important event of the year for the G20. The summit brings together heads of government from G20 member states in a forum that allows face-to-face communication about pressing global economic and financial issues. The G20 presidency sets out the agenda for the Leaders’ Summit, with Argentina focusing this year on the future of work, infrastructure for development, and a sustainable food future. These issues will be viewed through a lens of gender equality and an emphasis on women’s work, digital, and financial inclusion.

The 2018 Leaders’ Summit is taking place amid widespread political tensions, but leaders of all the member countries are expected to attend. In addition to the main summit, many leaders will host important side meetings. Trump is expected to meet with leaders from China, Japan, Germany, India, South Korea, Turkey, and Argentina. He is also expected to sign the US-Canada-Mexico Agreement (USMCA) with his Canadian and Mexican counterparts.

So far, there is no set time for a bilateral meeting between Trump and British Prime Minister Theresa May. Trump recently criticized May’s Brexit deal for its potential to block a new US-UK trade deal.

There will also be many bilateral trade discussions, particularly among rising economic powers. Narendra Modi, the prime minister of India, is scheduled to meet with Chinese Prime Minister Xi Jinping and hold informal talks with leaders of the other BRICS nations—Russia, Brazil, and South Africa. Modi will also participate in a trilateral meeting with the United States and Japan. Meanwhile, many hope that any sideline meeting between Trump and Xi would produce a “ceasefire” in the US-China trade war, though given recent statements by both governments, this seems unlikely.

Protests have often accompanied G20 summits. Argentine President Mauricio Macri’s government is bracing for more than thirty different anti-G20 protests. It has gone so far as to shut down public transport, divert air traffic away from the capital, and advise citizens to leave town for the duration of the summit.

As the summit opens on November 30, an increasingly fractious collection of world leaders will try to forge a united program to meet today’s pressing economic challenges.

Alina Alimova and Nicholas Goggin are interns with the Atlantic Council’s Eurasia Center.

Image: Argentina’s president, Mauricio Macri, arrived at the G20 Meeting of Finance Ministers in Buenos Aires, Argentina, on March 20. Argentina is hosting the G20 Leaders’ Summit which will convene in Buenos Aires on November 30 and December 1. (Argentine Presidency/Handout via Reuters)