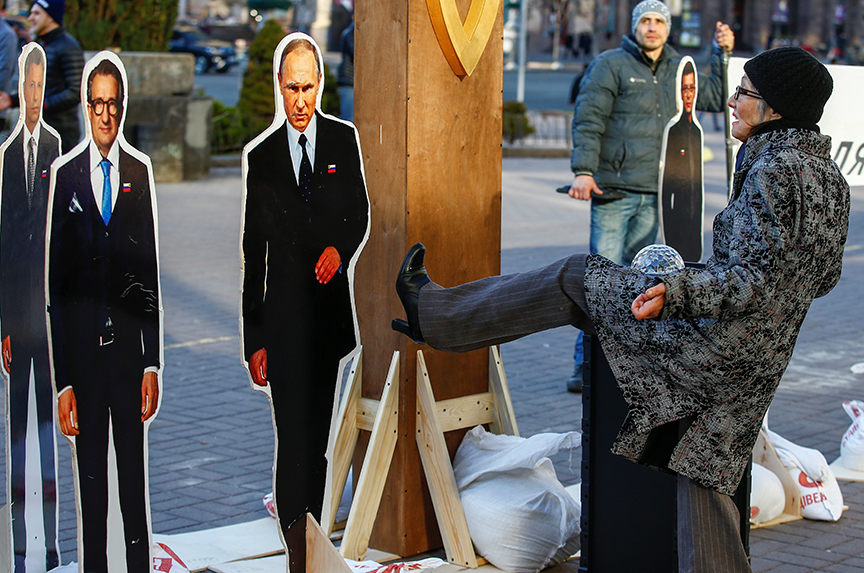 All around the world, Russia is increasingly asserting itself, propping up dictators, and, in some instances, posing a direct challenge to US interests. Russian President Vladimir Putin held his first-ever meeting with North Korean leader Kim Jong-un in Vladivostok on April 25. Kim’s visit to Russia, an old ally, came as diplomacy with US President Donald J. Trump has faltered.

Trump and Putin spoke on the phone for over an hour on May 3. Venezuela and North Korea were among the topics the two leaders discussed.

We take a look at some areas of confrontation, what is driving Russian interests, and how the United States is responding to this challenge.

The challenge: On April 21, Volodymyr Zelenskiy, a TV comedian, handily defeated incumbent president, Petro Poroshenko, winning nearly three-fourths of the vote in a presidential election runoff. One of Zelenskiy’s biggest tests now will be how he addresses the threat posed by Russia.

“Zelenskiy has publicly faulted the Kremlin for the war in Donbas and expressed an interest in Ukraine’s eventual membership in NATO and the EU,” said John E. Herbst, director of the Atlantic Council’s Eurasia Center. “That all suggests continuity in Ukraine’s foreign policy.”

“But Zelenskiy is truly a rookie politician, and [Russian President Vladimir] Putin may decide to test this newbie with a serious provocation,” said Herbst, adding, “My sense is that Zelenskiy understands this.  If he chooses the right advisers, Ukraine should be able to cope with Moscow’s next provocation.”

Herbst, a former US ambassador to Ukraine, said it is important that the United States be prepared as well.

Russia’s actions:  In March 2014, Russia annexed the Crimean Peninsula from Ukraine — an act that the United States and many other countries consider to be a violation of international law. The annexation drew US and EU sanctions on members of Putin’s inner circle, Russian officials, and entities.

US Secretary of State Michael Pompeo said in a July 25, 2018, statement — Crimea Declaration — “the United States rejects Russia’s attempted annexation of Crimea and pledges to maintain this policy until Ukraine’s territorial integrity is restored.”

The Russia-Ukraine crisis dramatically escalated on November 25, 2018, when a Russian coast guard vessel rammed a Ukrainian navy tugboat in the Sea of Azov. Russian forces fired on Ukrainian vessels injuring six crewmembers and captured three Ukrainian naval vessels. The incident happened when two Ukrainian navy artillery boats and a tugboat were traveling from Odesa on the Black Sea to Mariupol in the Sea of Azov via the Kerch Strait, a narrow passage between the Crimean Peninsula and Russia. The Ukrainian seamen remain in custody.

What does Russia want? “Moscow’s low-intensity war in Donbas and its multi-spectrum operations (disinformation, cyberattacks, efforts at subversion) are all designed to pressure Ukraine to pursue national security and economic policies subordinate to Kremlin interests,” explained Herbst.

Addressing the challenge: Herbst said Washington’s reaction to Moscow’s escalation in the Straits of Kerch in November was “late and weak.”

Nevertheless, he maintained, the United States has taken “serious steps to push back against Moscow’s aggression in Ukraine.”

“The two most important measures are sanctions, which reduce Russian economic growth and punish high-ranking Kremlin officials and cronies of President Putin, and military support to Ukraine, which enhance Ukraine’s ability to defend itself, including by inflicting casualties on Russian troops in Ukraine,” he said.

“The United States has also provided important support in boosting Ukraine’s cyber defenses, including to protect the integrity of this spring’s presidential elections,” he added.

Russia provided Assad with a lifeline when its military entered Syria’s civil war in September of 2015. The intervention, which started as Russian airstrikes in support of Syrian government troops grew to the supply of weapons, Russian troops, and military contractors on the ground, and the provision of diplomatic cover for Assad at the United Nations.

“Russia saved the Assad regime from military defeat by intervening in September 2015. But saving Bashar al-Assad then is not the same thing as sustaining him now,” said Frederic C. Hof, a distinguished senior fellow with the Atlantic Council’s Rafik Hariri Center for the Middle East.

“Popular unrest in Assad-held areas over fuel shortages, corruption, and a general absence of hope for a ‘peace dividend’ cannot be put down by Russian bombers,” he added.

The challenge: Hof maintained: “Russian military support for a regime steeped in war crimes has complicated the West’s battle against Islamist extremism and terrorism.”

“With rare exception, Russian forces (and those of the regime and pro-regime Iranian-led militias) targeted not ISIS, but anti-regime civilians and armed groups. Corrupt despots like Assad are, throughout the Muslim world, catnip for dysfunctional individuals susceptible to ISIS recruiters,” said Hof.

What does Russia want? Russia essentially wants to keep Assad in power in order to secure its military influence in the Middle East. Russia has a military base in the western Syrian province of Latakia and naval base in the port city of Tartus on the Mediterranean Sea.

Hof explained that Putin has had “one paramount interest in Syria: to sell Russian voters on the proposition that he has returned Moscow to great power status by rescuing Assad from an alleged American-led regime change operation.”

“For the Russian Federation, Syria is its sole Arab world client: a customer for Russian arms, a refueling station for Russian warships, and a potential trading partner,” he said.

“Russian Federation objectives could be better secured without Assad: a divisive, violent, and corrupt actor. But Assad remains central to the personal political calculations of Vladimir Putin,” Hof added.

“Yet a decision to sustain American involvement in the stabilization of ISIS-free eastern Syria could yield leverage by facilitating the growth of an anti-Assad governance model in a protected part of Syria,” he contended, adding, “But such a decision is not a given in light of President Trump’s clear preference to get out of Syria as articulated by his December 2018 tweet.”

In the tweet Hof referred to Trump, defying warnings from his top advisers, declared in a video message that all 2,000 US troops would return immediately from Syria. “We have won against ISIS,” he said.

The US military is now considering leaving 1,000 troops in Syria. But Trump’s December tweet  “still affects the willingness of allies and partners to commit manpower and other resources to eastern Syria,” said Hof.

“Still,” Hof said, “Trump administration military strikes in the wake of two Assad regime chemical attacks on civilians make Moscow more inclined to take him seriously than they did President Barack Obama, whose 2013 ‘red line’ collapse helped to convince Putin that he could do as he wished not only in Syria, but in Crimea and the rest of Ukraine.”

Russia’s role: On March 23, two Russian military aircraft carrying close to 100 Russian military advisers and troops arrived in Caracas. Days earlier, US-Russia talks in Rome on how to end the crisis in Venezuela stalled over the question of Nicolás Maduro’s legitimacy. While Russia considers Maduro the legitimate president of Venezuela, the United States has recognized Juan Guaidó as the interim president.

“Russian arms tied to Chinese money and Cuban intelligence have long helped prolong Maduro’s survival. Now its military cooperation has extended to soldiers on the ground and repeated, recent actions of a display of its military equipment,” he added.

Marczak pointed out that Putin’s quest for a multipolar world was fully endorsed by Maduro’s predecessor, Hugo Chavez. This marked the “beginning of the closeness in the relationship,” he said. Ties between the two countries today span from Russian arms sales to Russian oil extraction.

What does Russia want? Just like in Syria, the rationale behind Russia’s support for Maduro is clear: “Maduro’s survival gives Russia a foothold in the Americas,” said Marczak.

“Russia,” Marczak said, “sees Venezuela as a key strategic ally to counter US influence in the world. And it’s especially important to have such an ally in the Western Hemisphere.”

“Further, with sanctions limiting Rosneft activities around the world, Venezuelan oil takes on greater importance” for Russia, he added, referring to the Russian energy firm.

Addressing the challenge: US President Donald J. Trump has declared “Russia has to get out” of Venezuela and US Vice President Mike Pence has described Russian military support for Maduro as an “unwelcome provocation.” Yet, Russia remains.

CNN reported on April 15 that the Defense Department was developing military options to deter Russian, Chinese, and Cuban involvement in Venezuela.

“The United States should continue to make it crystal clear that Russian military presence in the Western Hemisphere will not be tolerated,” said Marczak. “But it’s not just the United States. The Venezuelan interim government and other Latin American governments, namely the Brazilians and Colombians, have each warned Russia that its military presence in the region is not welcome.”

Russia’s role: Libya has staggered from one crisis to the next since the ouster of its longtime leader, Moammar Gadhafi, in a popular uprising in 2011. Today, the country is split between two power centers — an internationally recognized government led by Prime Minister Fayez al-Serraj in Tripoli in the west and a House of Representatives in the eastern city of Tobruk.

Also in the east is Khalifa Haftar, the commander of the self-styled Libyan National Army, who is currently directing his troops in an offensive aimed at capturing Tripoli. While Haftar’s forces have advanced on the city they have been kept at bay by militias from Tripoli, Zintan, and Misrata.

Russia is playing both sides in this conflict, said Karim Mezran, a senior fellow in the Atlantic Council’s Rafik Hariri Center for the Middle East. “Russia is providing military advisers to Haftar’s forces from the private security contractor Wagner Group,” he said. “They are engaging Haftar with an eye on future business deals.”

“The Russians have an economic interest in Libya — they want to make money through reconstruction of the country — but they also have a military interest: they don’t want a base in Libya, they want access to the entire country,” said Mezran.

While Russia has been engaged with Haftar, Mezran said it has also “kept an open door” with Serraj’s government in the hope that it can “become the main actor in a mediation effort.”

The challenge: Russia’s role in Libya, located across the Mediterranean from the southern coast of Europe, poses a direct challenge to the West. “For Russia, gaining a foothold here is very important,” said Mezran. “Strategically, they are surrounding NATO.”

Should Russia gain a foothold in Libya, the United States and its Western allies stand to lose “a significant geostrategic position: the southern flank of the Mediterranean,” Mezran explained.

The United States has long maintained that there is no military solution in Libya. US Secretary of State Michael Pompeo, in a statement on April 7, urged Haftar to halt his military offensive on Tripoli. “Forces should return to status quo ante positions,” Pompeo said.

However, US President Donald J. Trump appeared to undercut that position when he spoke with Haftar on April 15. In the phone call, Trump “recognized Field Marshal Haftar’s significant role in fighting terrorism and securing Libya’s oil resources, and the two discussed a shared vision for Libya’s transition to a stable, democratic political system,” the White House said.