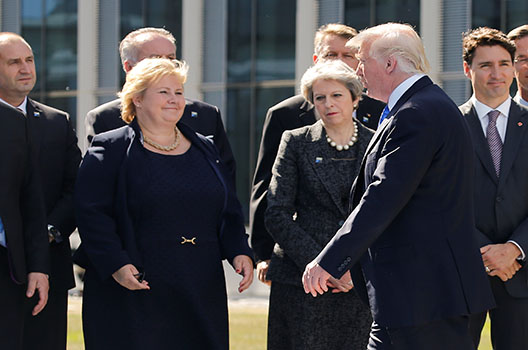 NATO must overcome two forms of discord—US-European and intra-European—in order to ensure the future health and effectiveness of the Alliance. It is not enough to hope for mere platitudes of unity at NATO’s summit in Brussels on July 11 and 12, sentiments that European leaders may not receive from the US president.

At last year’s “mini-summit,” US President Donald J. Trump publicly berated European allies for not spending 2 percent of GDP on defense—a goal that the allies agreed at their Wales Summit in 2014 to meet “within a decade.” This year, the path toward a successful summit appears equally unharmonious.

There is much at stake. The Alliance is looking to make progress on some key initiatives to bolster its collective defense and deterrence posture in Northern Europe and shore up stability in the south, and yet there are risks that politics and internal divisions could get in the way, and worse, become issues of longer-term concern.

NATO summits are typically a forum for allies to move the dial on policy issues of mutual importance. This year’s summit is no different. There are many important initiatives on the table, including increasing Alliance readiness in the face of Russian aggression to NATO’s east; implementing long-overdue military command structure reform; introducing a new training mission in Iraq; providing counterterrorism support to Afghanistan, Jordan, and Tunisia; and a new Black Sea regional security initiative.

There is likely to be agreement and progress on a number of fronts, but there are real concerns about the long-term impact of fractures within the Alliance itself. Disunity within NATO not only prevents congruence around specific goals, it more seriously sends harmful signals to global challengers and competitors, such as Russia and China.

What’s on the summit agenda?

Defense spending will be one of the key topics up for discussion at the summit. Prior to and since taking office, Trump has blasted European allies for not meeting their defense spending goals. In June, Trump sent sharply-worded letters to leaders of Canada, Belgium, Denmark, Norway, and notably Germany, in which he wrote “continued German underspending on defense undermines the security of the Alliance.” The letters, which follow similar formats, go on to lament that “it will, however, become increasingly difficult to justify to American citizens why some countries continue to fail to meet our shared collective security commitments.”

Trump is not the first US leader to come down hard on allies on defense spending, but the tone and timing of the letters has raised alarm among European leaders, with some reading them as a veiled threat that the United States might adjust its military presence in Europe if allies don’t step up. Such a development could signal a shift to a more transactional transatlantic relationship. It would also raise questions over the future of US commitments to European security at a time of increased military and hybrid forms of Russian aggression.

In his farewell address in 2011, US Defense Secretary Robert Gates criticized NATO allies for not spending enough on defense and warned of a “dim if not dismal future” unless more members contributed their fair share. Burden-sharing has remained a key sticking point in the Alliance, with the United States emphasizing valid concerns about chronic European underspending and its impact on credible defense.

Trump is not wrong to call out European allies whose defense spending is less than ambitious, but his caustic tone and singular focus on this one metric misses the mark on more valuable ways of measuring nations’ contributions to collective defense.

Allies such as Norway and Denmark, who currently do not meet the 2 percent mark, channel their funds directly into large-scale and impressive defense modernization plans, including procuring high-end capabilities such as US-made F-35s and P-8 aircraft, that help fill Alliance capability gaps. Efforts on this front demonstrate the importance of going beyond the 2 percent metric to look, more importantly, at how and where money is spent. For instance, Greece spends 2 percent on defense, but its defense budget goes largely toward personnel costs rather than enhancing important wartime capabilities. In order to understand allied contributions to collective defense in totality, it is crucial to look at other important areas such as defense procurement, investment in research and development (R&D), and participation in NATO missions.

At the summit in Brussels, European allies will push to have a more nuanced and constructive conversation about defense expenditures. They should continue to make the case to broaden understanding around what it means to contribute to NATO, even in the face of a US president who is “unilaterally focused” on the 2 percent target.

The US-proposed Readiness Initiative is a major proposal that will be up for discussion in Brussels. Following Russia’s annexation of Crimea in 2014, NATO placed rotational multinational battalions in the three Baltic States and Poland as a means to deter and defend against potential Russian aggression. Were an attack to be waged on one of NATO’s frontline states, allied presence would more forcefully trigger NATO’s Article 5 collective defense clause, where an attack against one is considered an attack against all. Today’s enhanced forward presence (eFP) is an important first step, but the forces are small in number, and in order to ensure credible defense and rectify slow deployments in a contingency, NATO must work to improve readiness across the Alliance.

It is in this context that NATO defense ministers agreed in June to support the “Four Thirties” initiative, a military readiness plan that would see the Alliance have—by 2020—30 land battalions, 30 air squadrons, and 30 navy vessels, ready for deployment in 30 days or less. If adopted at the NATO summit, the initiative would support US priorities in stepping up readiness in order to ensure that the Alliance is equipped to rapidly reinforce when and where it may need to. The multi-domain approach to territorial defense is an important feature and would likely aim to respond to some of the threats posed more recently by Russia in the air and maritime domains, as demonstrated during its Zapad 17 military exercise. If the initiative is adopted, next steps will include designating troops, establishing a reporting mechanism, and planning for readiness exercises.

Alongside readiness, the Alliance aims to advance long-overdue command structure reform with the creation of two new commands—one in Norfolk, Virginia, to ensure US maritime access across the Atlantic, and the other in Ulm, Germany, focused on logistics in Europe and ensuring allied forces can get to where they need to go. Agreement on command structure reform will be critical to securing improved military readiness for the Alliance, and will help ensure the United States’ ability to reinforce European forces.

Reports of a Pentagon study exploring the cost of withdrawing US troops from Germany set off alarm bells in European capitals over the potential repositioning of US troops across or out of Europe. Such a move would not only have military ramifications, but political ones as well. Although the White House has emphasized that the Pentagon assessment of US troop deployments is routine, it has added to Germany’s sense of unease following hostilities with Trump at the recent G-7 meeting in Canada, and the tense relationship between the US president and the German chancellor—Angela Merkel.

Tension between US and European leaders is not the only point of friction within the Alliance. An emergency European Council meeting in June demonstrated ongoing disagreements among European Union (EU) members of the Alliance over what to do about flows of refugees and migrants to Europe. The meeting saw EU leaders rush through a host of measures to strengthen external borders and internal controls over migration after pressure from Italy’s new government and Germany’s shaky coalition. Merkel kept her domestic governing coalition together by relenting to pressure from her interior minister and cementing a tougher deal on transit camps for migrants at Germany’s border. Although French President Emmanuel Macron praised the “European cooperation” that enabled a deal to come together, southern European states remain frustrated by what they see as unfair burden-sharing on migration issues, and a lack of will by other allies to carry more weight by taking in greater numbers of refugees.

Europe’s migration issue is illustrative of a larger and more concerning linchpin for NATO. While northern and eastern allies are concerned about Russian aggression to the east, southern allies are focused on migration and border concerns. A fundamental misalignment in threat perceptions now exists within the Alliance, and this inability to agree on what the threat is makes it harder for NATO allies to collectively grapple with and adapt to the array of complex security challenges they face. If this misalignment cements, it will make it very difficult for NATO to act together in the face of an immediate and direct threat, which risks undermining the collectivity and credibility underpinning NATO’s defense clause.

With Trump heading from Brussels to Helsinki for a summit with Russian President Vladimir Putin on July 16, there are very real concerns about what concessions he may offer the Russian leader in his desire to achieve a high-level diplomatic win. The Alliance must stay steadfast. Its cohesion has arguably never been more important than since the end of the Cold War. Long-term, NATO must grapple with its internal fissures and differing threat perceptions, while making progress on the practical and significant initiatives on the table at the summit.

Clementine G. Starling is an assistant director in the Atlantic Council’s Transatlantic Security Initiative. Follow her on Twitter @StarlingCG.