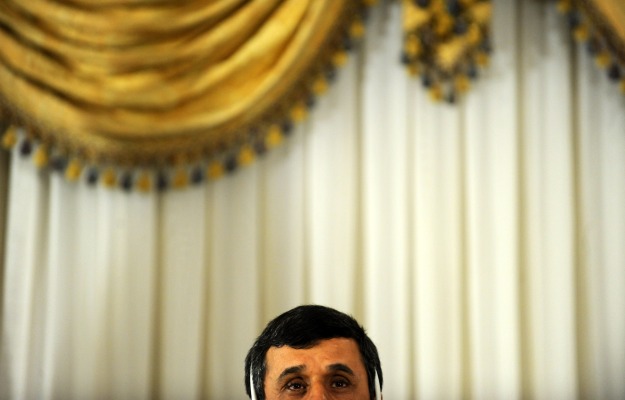 Mahmoud Ahmadinejad is now discovering what his predecessors in Islamic Iran’s unique dual system of government all learned to their sorrow: You serve at the pleasure of the supreme leader, and he prefers his presidents weak.

In the aftermath of a failed attempt by Ahmadinejad to fire Iran’s intelligence minister last month, Supreme Leader Ali Khamenei and his surrogates have moved against supporters of Ahmadinejad and of his controversial chief aide, Esfandiar Rahim Mashaei.

Two dozen people close to the president and Mashaei have been arrested, including Abbas Amirifar, the prayer leader and head of cultural affairs in the president’s office, who reportedly attempted suicide in prison last week. Meanwhile, Ahmadinejad’s top vice president, Hamid Baghaei, was suspended last weekend from holding political office for four years because of unspecified "violations."

It now appears that Ahmadinejad will be forced to jettison Mashaei, a close friend of 30 years whose daughter is married to Ahmadinejad’s son, if the president intends to remain in office through the end of his term in 2013. And even if he does get rid of Mashaei, Ahmadinejad will be a feeble lame duck, a pale shadow of the seemingly superconfident figure who has strutted the world stage since he was first elected in 2005.

"Everybody smells blood," said Alireza Nader, an Iran analyst at the Rand Corporation. "Ahmadinejad’s fatal mistake was to challenge Khamenei head-on over the intelligence minister."

Ordered to retain the minister, Heydar Moslehi, Ahmadinejad refused to attend cabinet meetings for 11 days and sought to reaffirm his power by firing three other ministers, including the official in charge of Iran’s crucial oil industry.

Increasingly, however, the president finds himself checked at every turn.

On Monday, May 23, a senior presidential advisor, Mojtaba Samareh Hashemi, announced that presidential trips to the provinces — a favorite means for Ahmadinejad to distribute largesse, gain rural support, and make speeches covered by Iranian state media — have been postponed for the time being.

Nor can the president escape abroad to represent Iran in Vienna next month at a major OPEC meeting. On May 20, the Guardian Council — a powerful, clerical-run body that vets legislation and candidates for office — declared that Ahmadinejad could not serve as caretaker head of the oil ministry and would have to name someone else. (Iran serves as president of OPEC this year and needs to keep the price of oil as high as possible to finance its budget, pegged to $81.50 a barrel.)

In a further and deeply personal blow, Fars News Agency, which is close to Iran’s Revolutionary Guards, published an interview in which Ahmadinejad’s son-in-law, Mehdi Khorshidi, accused the unnamed leader of a "deviant group" of daring to comment on religion even though he had no theological training. The reference was clearly to Mashaei, who has endorsed Ahmadinejad’s discourse on the imminent coming of the Hidden Imam, a messiah-like figure for Shiite Muslims who is supposed to return at a time of his choosing. This embrace of folk religion infuriates clerics who claim a monopoly on religious interpretation.

Mashaei has also been criticized for saying that he has nothing against Israelis, for showing liberal attitudes toward women and Iranian expatriates, and plowing millions of dollars into a new conference center on Kish Island in the Persian Gulf. Nader says, however, that the current campaign is really directed against Ahmadinejad and that "Mashaei is just a proxy."

Ahmadinejad is hardly the first Iranian president to face challenges from the supreme leader, who has the final say on all policies under Iran’s theocratic system. Reformist Mohammad Khatami, Iran’s president from 1997 to 2005, endured repeated blows, including the arrest and imprisonment of his close aide and interior minister, Abdollah Nouri, and of other top supporters, including a mayor of Tehran, Gholamhossein Karbaschi.

The latest developments, however, are striking in view of the fact that Khamenei so strongly backed Ahmadinejad after the disputed 2009 election, going so far as to call the president’s reelection a "divine assessment."

Since then, the regime has weathered unprecedented opposition protests and surmounted another major challenge by phasing out costly subsidies on consumer staples. Ahmadinejad has served the regime’s purposes; his usefulness now appears at an end. As parliamentary elections approach next year, followed by a new presidential vote, Iran’s conservative establishment appears intent on preventing Ahmadinejad from designating a successor and planning a possible Putin-esque comeback in 2017. The best way to block that is to weaken him now.

"You know how this works," said Mehdi Khalaji, an Iran expert at the Washington Institute for Near East Policy. "This is what happened to Khatami and to [Khatami’s predecessor Ali Akbar Hashemi] Rafsanjani and to Khamenei when he was president. Khamenei has no problem with any president as long as he is weak."

However, the swiftness of Ahmadinejad’s fall and the degree of invective — charges against his entourage have ranged from sorcery to treason — are shocking even to those inured to Iran’s brutally personal politics. This may reflect in part the pressure the regime is facing in areas ranging from foreign policy — where ally Syria is struggling to contain mass protests — to the anemic, sanctions-plagued economy. Growth this year will be flat, according to Djavad Salehi-Isfahani, a specialist on the Iranian economy at Virginia Tech.

Farideh Farhi, an Iran expert at the University of Hawaii, thinks that Ahmadinejad has basically been given a choice: submit or be removed. Given the president’s history, she said, "I can only assume that if he is to go down, he will make sure that it is as painful as possible for everyone concerned.