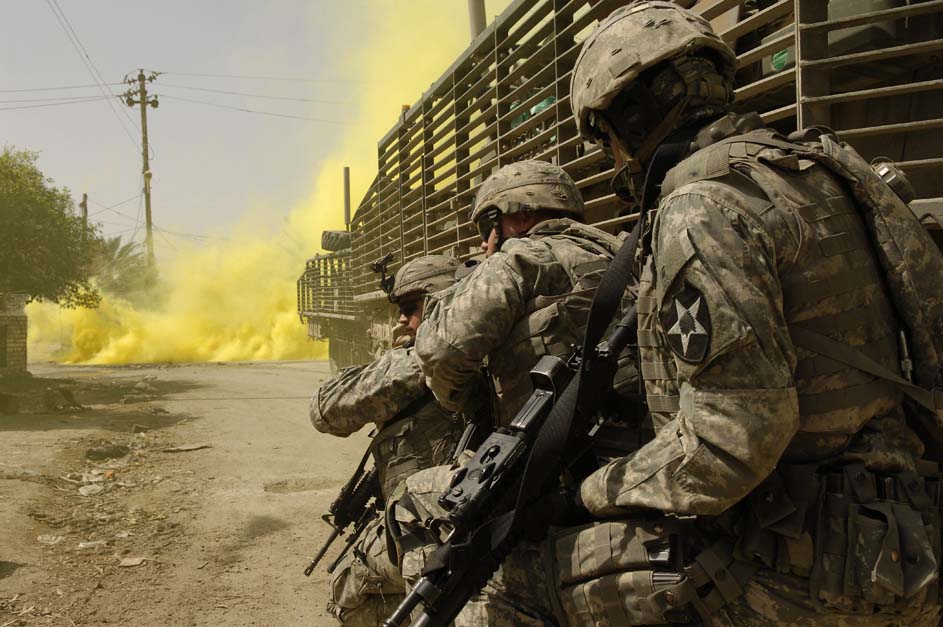 While military forces have grown ever more sophisticated, their size and density have been on the decline for decades.

In 1842, Britain fielded 14,000 soldiers for the Battle of Kabul, while at the same time having enough reserve manpower to police an empire on which the sun never set. In 2012, with the U.K. still having the fifth-largest defense budget and not much of an empire, senior British military leaders have repeatedly told the British public, the political leadership in London, and anyone else who cares to listen that the deployment of a mere 8,000 British soldiers to Afghanistan on a sustained basis is almost breaking the force.

In the 1950s, the United States built over 9,000 F-86 Sabres, a key fighter aircraft in the US and allied inventories during the early Cold War period. About half as many F-16s were built in the 1970s. Today, the F-35 is touted to be the next front-line fighter for the United States, as well as for America’s friends and allies across the world. It is likely that no more than 3,000 will ever be built, a two-thirds reduction in comparison to the F-86.

One reason for the shrinkage of the modern military is cost. Fielding fully-capable state of the art armed forces is expensive. Ever more exquisite and sophisticated weapons, systems, and platforms demand a growing share of a country’s defense budget, crowding out other priorities and reducing the number of systems and platforms a government can buy. But the explanation isn’t limited to the defense-industrial sector. The manpower required to man, maintain, service, arm, and upgrade these expensive machines is also an expensive outlay. Across the developed world, conscripted forces have gone by the wayside in favor of volunteer professionals who, unlike their historical predecessors, are required to be able to understand, operate, and maintain a dazzling array of technology.

A well-equipped Western soldier of today is not only required to be able to operate his basic weapon and other bits of traditional soldiering gear. He also is expected to be able to be proficient in the use of advanced weapon sights, GPS devices, handheld computers, and night-vision goggles. Platoon leaders in Western militaries (usually people in their early 20s not long out of college) are responsible for weapons, equipment, and vehicles worth tens of millions of dollars.

The numbers behind these trends are stark. According to the U.S. Department of Defense, it cost roughly $2,600 in today’s dollars to equip a rifleman during World War II. Today, the number is close to $20,000. Infantry equipment currently under development for the near-future force will inflate the price tag to close to $60,000 per rifleman.

In order to attract and retain enlisted soldiers and officers capable of handling the demands placed on them by the ever-increasing sophistication of their weapons, machines, vehicles, and systems, the militaries of the West are forced to offer competitive wages and benefits. Indeed, even a very quick glance at the U.S. military’s pay chart reveals that, based on education and experience levels, modern soldiering is far from a low-paying job. The benefits offered to U.S. service members (such as housing allowance, medical, child care, retirement, etc.) would be considered generous indeed in the civilian workforce. As a result, the health care and retirement benefits of the Department of Defense are projected to skyrocket in the coming decades.The point here is not that the members of the military are overpaid, just that attracting and retaining the manpower required to operate the ever more sophisticated equipment and platforms of the military comes with an increasingly high price tag.

The result of the ever-increasing costs for military systems and for the compensation, training, and education of military personnel is that the number of both people and machines have been drastically reduced. But here’s the rub: Even though modern military systems and units can outperform their predecessors by wide margins, they need a certain mass or density of systems or units in order to be able to respond to multiple contingencies, react to surprise, have a reserve at the ready, sustain deployments over time, or to achieve decisive results on the battlefield.

Many smaller nations are now getting close to having militaries of such low density that they cannot make meaningful contributions. Norway, for example, lost one of its four C-130s in a crash earlier this year, wiping out a quarter of the Norwegian air force’s fixed-wing lift capacity in one fell swoop and calling into question whether Norway could deliver the lift capacity it had committed to the NATO operation in Afghanistan. This sudden shortfall was only solved by the United States diverting the delivery of a C-130 to the U.S. Air Force in order to sell it to Norway instead. Senior European military leaders will admit, if pressed, that they have capabilities that are now so limited that they are below the level of full operability. And leaders have an incentive not to use the few assets they have because of the risk of loss or damage.

Arrival at the point when a military force becomes so exquisite, sophisticated, expensive, and small that it no longer can fulfill a meaningful purpose may perhaps be delayed by cost-cutting, specialization, multinational pooling and sharing resources, or by mixing high- and low-end assets (such as F-16s and F-35s). Some nations have even chosen to completely remove capabilities in order to be able to spend more elsewhere. This was the case when Denmark ended its submarine force, and, more recently, the Netherlands decided to do away with its main battle tanks. The United States has so far avoided this loss of density by using the brute fiscal force of ever increasing defense budgets, but that may not last much longer as America seeks to get its fiscal house in order. None of these measures will allow the militaries of the West to escape the fundamental logic at work here. Instead, warfare needs to be rebooted.

Perhaps cyberspace will become the new decisive realm of warfare, where nations can relatively cheaply thrust and parry, and attack, defend, and hold assets at risk in order to coerce or deter an adversary. Maybe unmanned systems will not go down the road of ever increasing costs as most legacy systems have, and drones will become the preferred mode of combat in the future. In any case, the nation that can reboot warfare and escape the logic of the modern, incredible, shrinking military will be well positioned to dominate the military landscape of the 21st century. It’s just a matter of who reaches for the ctrl+alt+delete keys first.

Magnus Nordenman is a deputy director of the Brent Scowcroft Center on International Security. This piece was first published on the Atlantic.