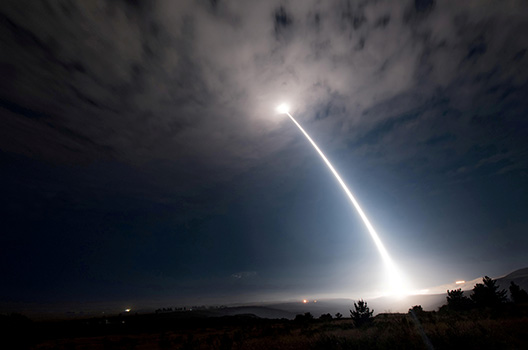 US President Donald J. Trump announced on October 20 that the United States would soon pull out of the Intermediate-range Nuclear Forces Treaty (INF), a major arms control agreement signed between the Soviet Union and the United States in 1987.

The agreement, which banned both countries—and the USSR’s successor nations—from keeping ground-based nuclear and conventional missiles with ranges of 500 to 5,500 kilometers, became untenable, US officials argued, after evidence emerged of Russian violations and continued build-up of Chinese missiles within this range.

What is the INF Treaty?

The need for an agreement limiting intermediate-range missiles between the United States and the Soviet Union emerged as both countries began expanding their nuclear arsenals in the 1970s. Throughout the decade, the Soviet Union began updating its older intermediate range systems with a new SS-20 missile, which observers in Washington feared was tipping the nuclear balance of power in Europe toward Moscow.

In response, Washington began both expanding its missile systems in Europe, including deployment of new Pershing missiles, and pursuing talks with Soviet leadership to limit the build-up. Negotiations took place throughout the early 1980s, accelerating as Soviet leader Mikhail Gorbachev was increasingly squeezed by economic and geopolitical pressures in the second half of the decade.

US President Ronald Reagan and Gorbachev signed the INF Treaty in December 1987. As a result of the treaty, almost 2,700 missiles and their launching systems were dismantled by both sides by June 1991, with the Soviets alone eliminating 1,700 of their missiles.

Why is the United States withdrawing?

In January 2014, the New York Times reported that US officials had evidence that Russia was testing a new ground-based cruise missile, which was directly against the INF Treaty provisions. Although the agreement was between the United States and the Soviet Union, following the break-up of the Communist nation in 1991, Russia, Belarus, Kazakhstan, and Ukraine remained as successor parties to the treaty.

US officials believed Moscow had been developing this new missile since 2008, and in July 2014 US President Barack Obama sent a letter to Russian President Vladimir Putin directly accusing Russia of violating the treaty. US National Security Advisor John Bolton will meet Putin in Moscow on October 23.

Although the Obama administration identified the Russian violations, support for a US withdrawal from the INF Treaty did not gain steam until the start of the Trump administration. In December 2017, the State Department released an “INF Treaty Integrated Strategy,” which maintained that “the United States remains firmly committed to the INF Treaty,” but warned that it “cannot stand still while the Russian Federation continues to develop military systems in violation of the treaty.”

This Trump administration announcement followed the inclusion of a new program in the 2018 National Defense Authorization Act, which would begin researching a new ground-launched cruise missile (GLCM). In the legislation, the US Congress authorized $58 million for the program. Although research and development are not prohibited explicitly under the INF, the testing or deployment of a GLCM would violate the INF provisions.

In addition to the Russian violations, many US officials have expressed concern about the build-up of Chinese nuclear forces in East Asia. As many as 95 percent of Chinese missiles fall into the range covered by the INF. The United States’ participation in the INF Treaty prohibits the US military from developing or deploying missiles in this range anywhere in the world, not just Europe. The INF is handicapping the United States’ ability to adequately respond to Chinese build-up in East Asia, according to many in the Trump administration, and Russian violations make the agreement unworthy of saving, they argue.

What will the withdrawal mean?

On October 21, Russian Deputy Foreign Minister Sergey Ryabkov said a US withdrawal would be “a very dangerous step.” He insisted that the step was attempted “blackmail to forcefully get certain concessions in a number of areas.”

Trump’s decision also drew criticism from Republican lawmakers, such as Sens. Bob Corker (R-TN) and Rand Paul (R-KY), with Corker hoping that the move was simply a ploy to get Moscow to move back to compliance.

Gavin Williamson, the British defense secretary, signaled London’s support for the deal, insisting that Moscow’s moves have made a “mockery” of the deal. On October 2, NATO Secretary General Jens Stoltenberg maintained that all NATO allies agreed with Washington’s determination that Moscow had indeed broken the rules of the treaty.

Even so, many European allies could have grave concerns over the end of the agreement. On October 21, the German government said it would regret any decision to reverse “an important element of arms control that especially serves European interests.” After the INF was signed, Germany, Hungary, Poland, the Czech Republic, and Slovakia all dismantled their intermediate missiles, despite not being parties to the agreement. US deployment of Pershing missiles during the Cold War prompted fierce domestic opposition in Germany, and the reintroduction of new US missiles in Europe could spark a similar response.

Should Trump follow through on his threat to leave the INF, it would also open the door to potential nuclear build-up in East Asia, as Washington looks to counter growing Chinese presence. A deployment of missiles to Guam or allies Japan and Australia would not be out of the question, with uncertain consequences for the region.