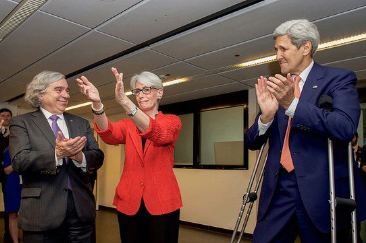 The Joint Comprehensive Plan of Action (JCPOA) signed July 14 between Iran and the P5+1 puts verifiable limits on Iran’s nuclear program in exchange for sanctions relief. Assuming Tehran abides by the terms of the accord, Iran will not be able to build nuclear weapons for the lifetime of the deal, but the agreement presents serious risks nonetheless.

Due to the sunset clause, the key limits on Iran’s nuclear program will begin to expire after ten to fifteen years, at which point, Iran’s breakout time will shrink, in the words of President Obama, “almost down to zero.” At this point, even some of the deal’s supporters acknowledge that America’s only option to stop a determined Iran from building nuclear weapons will be to use military force. Once the deal expires, however, Iran’s program can advance beyond our true military red lines legally and it will be difficult to generate support for action when Tehran is abiding by commitments spelled out by Washington. If Iran is determined to build nuclear weapons, therefore, this deal will not stop it. It will simply slow and manage the process.

There is also the possibility that Iran will attempt to circumvent the deal’s limitations before it expires. The P5+1 negotiated detailed provisions for inspections and access to Iranian nuclear facilities, but, at the end of the day, gaining entry to suspect sites will still require Iranian cooperation, something that has not been forthcoming in the past.

The deal also reduces US leverage over Iran by lifting economic sanctions. The deal includes provisions to “snap back” sanctions if Iran cheats, but it is impossible to know how this measure will work in practice and there is reason to believe that it will be difficult to reverse trade and financial flows into Iran once they have begun.

Moreover, the sanctions relief and unfreezing of assets will provide Iran with an estimated $140 billion and it is likely that at least some of these funds will be used to support terror and proxy groups, enhancing Iran’s malign influence in the region.

Further, the deal is contrary to longstanding US nonproliferation principles. Washington opposes the spread of enrichment and reprocessing technology, but this deal carves out an exception for Iran, potentially setting a dangerous precedent. It will be more difficult to dissuade other countries from building sensitive nuclear facilities in the wake of this deal, potentially leading to an incipient arms race in the region and weakening the nuclear Non-Proliferation Treaty.

On balance, therefore, this deal does not advance US interests: It does not stop Iran from building nuclear weapons, it will enhance Iran’s ability to threaten US allies and partners in the Middle East, and it weakens global nonproliferation norms.

Members of Congress should vote to disapprove this deal and seek to override any presidential veto.

Matthew Kroenig is a Nonresident Senior Fellow at the Atlantic Council’s Scowcroft Center for Strategy and Security.

Image: Energy Secretary Ernest Moniz (left) and Secretary of State John F. Kerry applaud Under Secretary of State for Political Affairs, Wendy Sherman, for her work on the nuclear agreement with Iran in Vienna, Austria, July 14. (Photo courtesy of the State Department)