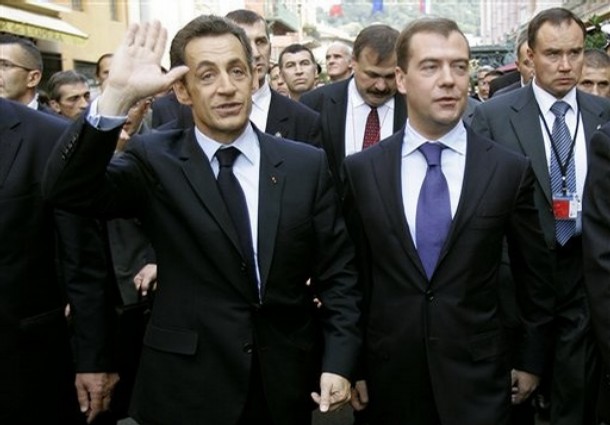 Russian President Dmitri Medvedev told the Federal Assembly on November 5 that he will deploy SS-26 Iskander short-range semi-ballistic missiles in the heart of Central Europe.

Speaking on the morrow of Barack Obama’s election as President of the United States, Medvedev appeared to issue the president-elect his first foreign policy challenge.  But Moscow’s rhetorical missile was aimed not at Obama headquarters in Chicago, but at the November 14 European Union-Russia Summit meeting in Nice, on the French Riviera.

Medvedev fabricated the muscle-flexing bit of his State of the Nation speech around the now familiar Russian bugaboo of a prospective American missile defense system in Europe.

“We will deploy the Iskander missile system in the Kaliningrad Region,” Medvedev said, “to be able, if necessary, to neutralize the missile defense system.  Naturally, we envisage using the resources of the Russian Navy for these purposes as well.  And finally, electronic jamming of the new installations of the U.S. missile defense system will be carried out from the territory of the same westernmost region, that is, from Kaliningrad.”

Of course, the Kremlin understands that ten missile interceptors in Central Europe will have naught to do with Russia’s strategic missiles, which are too numerous and too far east to be affected by America’s puny missile defense system.  Russian long-range missiles, if they were ever launched against America, would fly over the North Pole, not across Poland.

The Kremlin knows that the world is round, but it also knows a good rhetorical issue.  Explaining the Kaliningrad-bound SS-26s, Medvedev said, “I want to emphasize that we have been forced to take these measures.”  Like Moscow’s deployment of SS-20 missiles in the western USSR during that late seventies, this issue has the potential to open rifts between America and Europe and among Europeans.

To have such political effects, people must fear—however reluctant they may be to admit it—that there is at least some chance that Iskander could be used.  To stoke this fear, Europeans need look no further than Russia’s August attack on Georgia during which the SS-26 and its predecessor, the SS-21 Tochka, were fired at civilian targets.

The Russian military fired Tochka missiles against Oni, Sinaguri and Poti.  Worse, Russian forces apparently fired SS-26 Iskander missiles in a live demonstration for prospective buyers from Iran and Syria.  Within 30 minutes of each other on August 12, one Iskander impacted near the Western Route (Baku-Supsa) oil pipeline, and another slammed into downtown Gori, killing 5 people, including Dutch journalist Stan Storimans.

Moreover, Georgian authorities believe that Upper Abkhazia, also known as the Kodori Gorge, now inaccessible due to Russian occupation, was subjected to SS-21 and SS-26 attacks.

Combine a few firings in a not-so-far corner of Europe with some tough talk and wait for the political impact.

In this case, Medvedev did not have long to wait.  French President Nicolas Sarkozy, anxious to be handed the diadem for his impulsive diplomacy at the head of the EU Presidency, played right into Moscow’s hands.

After putting about the rumor that last August he had soothed the ire of Russian Prime Minister Vladimir Putin who wanted to hang Georgian President Mikheil Saakashvili “by the balls,” Sarkozy proceeded to sooth Moscow’s pique over American missile defenses.  The French President’s palliative was to call for a conference next summer—well beyond the mandate of the French EU Presidency—to discuss one of Moscow’s pet projects, a European security system.  “Between now and then,” Sarkozy condescended,”please, no more talk of missile deployment or antimissile deployment.”

At least for a time, which is altogether at the Kremlin’s discretion, Sarkozy’s gambit allowed Medvedev magnanimously to step back from his threat to deploy SS-26s in Kaliningrad.  For a fleeting moment, Sarkozy looked like a statesman, but overlooked realities snatched the diadem away before it reached his brow.

The agreements for America to deploy a radar in the Czech Republic and interceptor missiles in Poland were made by sovereign governments that promptly objected to Sarkozy’s interference.  “There was nothing in the EU mandate to talk about missile defense,” former Czech Foreign Minister Alexandr Vondra told the New York Times.

In addition, Sarkozy’s stance in Nice contradicted a NATO position to which France agreed at the April Bucharest Summit.  Last week, he defended Medvedev’s threat as “a response to various nations in Europe who, without consulting anyone, agreed to deploy new weapons on their soil.”  In contrast, The Bucharest Summit statement recognizes “the substantial contribution to the protection of Allies from long-range ballistic missiles to be provided by the planned deployment of European-based United States missile defense assets.”

All this contributes to a feeling in Prague that Sarkozy is trying to usurp the impending Czech EU Presidency.  Moreover, though Obama will surely review the missile defense decision, he may chafe at French efforts to re-open an apparently settled matter before he does.

Without moving a missile, Moscow has westerners atwitter!