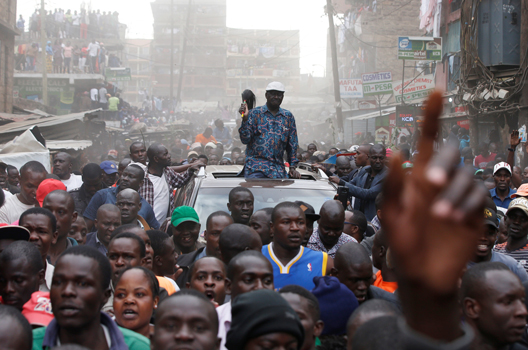 Though incumbent Kenyan President Uhuru Kenyatta has won the 2017 presidential election, the country remains on edge due to allegations of voter fraud by his opponent, Raila Odinga, which could plunge the country into post-election violence.

In 2007, a horrific spasm of post-election violence swept across Kenya when Odinga, who has made four bids for the presidency, contested his defeat, claiming the vote was rigged. Every few years since then, Africans and Africanists abroad have watched the approach of elections in Kenya with dread. Taken off guard by the violence that occurred in 2007, and then over-pessimistic about the next elections that occurred in 2013, the international community seems unable to correctly predict whether significant bloodshed will occur, turning every Kenyan election into a nail-biting event. This year’s elections have upheld that pattern.

According to the official results of the election, announced August 11, Kenyatta secured 54.27 percent of votes, while Odinga won 44.74 percent.

Even before the final result was announced, Odinga’s opposition party announced that it would reject the results of the August 8 election if he did not win. Despite pressure from the international community, he has not yet conceded, claiming the votes were manipulated and urging supporters to stay home from work in protest. Odinga has provided no evidence for this claim – but he may not have to. Though the Western nations and international observers denied it at the time, the 2007 election was certainly rigged, and so the current denials by the same groups of officials are likely to ring hollow to Odinga’s supporters. Amid the controversy surrounding election results and allegations of inaccuracies, post-election violence is a looming threat with historical precedents.

So far, though twenty-four people have been killed in protests since the August 8 vote, a fragile calm prevails in Kenya. However, if the 2007 elections are any guide, the most dangerous moment will not arrive until the Kenyan courts weigh in on the election board’s final results. That moment, when the courts corroborated Odinga’s defeat, triggered the violence in 2007. However, it remains uncertain whether Odinga and his party will turn to the courts for a verdict this time around.

While the international media and the expert community are prone to describing the endless election-related violence in Kenya as an outgrowth of “tribalism,” that is not the primary problem. Election-related violence in Kenya may play out along ethnic lines, but evidence suggests that it is triggered by the failure of the Kenyan government and its international partners to hold a credible vote.

Violence is endemic to elections in Kenya. Kenyan politicians are notorious for bribing their supporters with money and favors, and candidates habitually pay gangs of machete-wielding youth to suppress voter turnout in rival strongholds. Most Kenyan elections over the last few decades have been accompanied by some level of bloodshed. The question is usually not “if” there will be violence, but rather, “how much?” Even the 2013 presidential elections—which after the violence in 2007 were loudly celebrated by the international community for their peacefulness—were marred by an electronic systems failure, looting sprees, and a couple of dozen deaths.

Likewise, when it comes to manipulation of the vote—whether through intimidation, bribery, or outright rigging—Kenyans implicitly understand that it is a question of “how much.” This year, the torture and murder of Chris Msando, the election official in charge of the electronic tallying system for the 2017 election, just days before the election understandably set the entire country on edge and inflamed reasonable fears that the elections would be rigged. Kenya’s election board, the IEBC, has bungled its response to the incident, with its top officials issuing contradictory statements about whether hacking attempts on the system were made and how far the hackers got. To their credit, IEBC officials have also abandoned the electronic tallying system and counted the paper ballots instead. However, the 2007 election was manipulated through the paper ballots, as the public is likely to remember. There is no remedy for a basic lack of public confidence in the system, and it this—rather than the specifics of the current electoral process—that officials need to address in order to prevent another round of violence.

The recurrence of post-election violence is a testament to the strength rather than the weakness of Kenya’s democracy. In the most oppressive African states, elections are soundless, choreographed affairs in which ruling parties sweep more than 99 percent of the vote, as was seen two weeks ago in Rwanda. Kenyan elections are clearly dangerous and imperfect—but they are also hard-fought contests on a mostly level playing field. The sanctity of the right to vote, and to have that vote counted, is forcefully defended by the Kenyan public. Much of Kenya’s modern mythos is based on the extraordinary miracle of the 2002 elections, when the people voted against then-President of Kenya Daniel arap Moi. He was obliged to step down peacefully, ending his twenty-four-year reign. Since then, the power of the vote has been a source of strength and pride to the nation.

The 2007 post-election violence, though horrific, must therefore be understood as a demand by the Kenyan people for justice. Though tribal animosities directed and ensured the escalation of the violence, it was the irresponsibility of the Kenyan courts and the international community—who downplayed credible evidence of fraud, declined a lengthy but necessary investigation of the election results, and rushed to anoint the incumbent as the election winner to ignore abundant evidence of fraud—that actually propelled Kenyans into the street.

Washington was especially slow to acknowledge irregularities in the 2007 election that implicated the incumbent then-Kenyan President Mwai Kibaki in vote-rigging which led to Odinga’s defeat. Washington further inflamed the Kenyan public by refusing to release the results of exit polling that had been carried out on behalf of the US Agency for International Development. When the polling was eventually released months later it showed that Kibaki should indeed have lost the election by a 6 percent margin. Instead, he won the election by a mere 2 percent. To the Kenyan public, the information revealed appeared to suggest collusion between Washington and Nairobi.

When the Kenyan courts declared Kibaki the winner of the election after only a few days and without resolving the substantial evidence that fraud had taken place, Washington, rather than insist on an investigation, was the first government to issue congratulations to Kibaki. Undoubtedly, US officials hoped that by denying the allegations of election-rigging and quickly embracing a winner, they could forestall unrest and move past the election crisis. That was a terrible misjudgment—and international officials need to be wary not to repeat that mistake in 2017.

Though the events are rarely linked in US policy discussions, it of course does not help that the 2007 Kenyan election catastrophe occurred right alongside the Western-backed Ethiopian invasion of Somalia, which has had vicious consequences for Kenya. (Kenya has suffered multiple devastating terror attacks at the hands of the terror group al Shabaab, whose rise to power in Somalia came a direct result of that invasion.)

Former US Secretary of State John Kerry acted as an international observer in the 2017 elections and claimed that the outcome, supported by paper votes, is accurate; former President Barack Obama also weighed in to urge calm. Nevertheless, the lack of a strong reaction from the international community to the post-election violence in 2007 damaged, perhaps beyond repair, the credibility of international actors in Kenyan elections. The words of Kerry and Obama are necessary and welcome—but it is doubtful that anyone in Kenya will be swayed from taking violent self-help remedies by their promises.

The only silver lining here is that the Kenyan people also have been stunned and chastened by the ferocity of the post-election conflict that killed so many people a decade ago. Most observers attribute the relative quiet of the 2013 elections, and the muted response so far to the 2017 polls, to the national sense of shame and to the public’s determination never to allow such events to recur.

Given the murder of Chris Msando, the may-or-may-not have happened attempts at hacking, and the small irregularities in the vote tallies that have already been reported by watchdog groups, a long and transparent investigation of the 2017 election results is obviously required appease Odinga’s supporters. Hopefully the lessons of 2007 have been observed, because if there is another rush to close the book on the election results by the Kenyan and international authorities, history could certainly repeat itself.

Bronwyn Bruton is the director of programs and studies in the Atlantic Council’s Africa Center. You can follow her on Twitter @BronwynBruton.