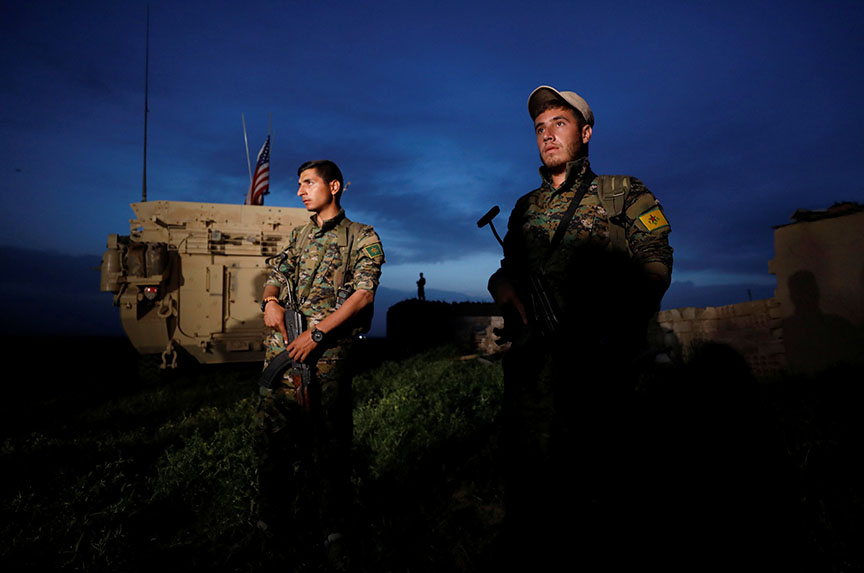 US support for a Kurdish militia in Syria has become a point of contention in the US-Turkey relationship.

Who are the Kurds and why is US support so contentious?

Numbering as many as thirty-five million, Kurds are centered mainly in southeastern Turkey, Syria, Iraq, and Iran. After the fall of the Ottoman Empire early in the twentieth century, Kurds found themselves without a state of their own, but they had never been truly autonomous or self-governing.

Several Kurdish uprisings occurred since the Turkish Republic was founded in 1923, but Kurdish nationalism didn’t truly arise as a true force until Abdullah Öcalan and his political movement of the late 1970s.

Öcalan formed the Kurdistan Workers’ Party (PKK) with a Marxist-Leninist and Kurdish nationalist ideology in 1978. The following year he fled to Syria, where he received extensive support from then-Syrian President Hafez al-Assad.

Öcalan spent nearly twenty years pushing the Kurdish nationalist agenda and directing PKK attacks from Damascus. He also capitalized on Syrian Kurds’ frustration over being denied citizenship and rallied them against the Turkish government in Ankara.

Financed by drug trafficking and buoyed by his ties to foreign states and non-state actors, Öcalan’s PKK killed more than 30,000 men and women, kidnapped schoolteachers, and destroyed government properties in the heavily Kurdish-populated southeastern region of Turkey. Unrest and threat of violence in the Kurdish areas caused investment there to plummet and damage the economy.

Öcalan was expelled from Syria, captured, and jailed in Turkey since 1999. The PKK went relatively quiet for a few years.

Where is the PKK active and who are its leaders?

The PKK mainly attacks targets in the southeastern region of Turkey. Its militant followers, however, have spread out across Turkey’s neighborhood, into Iraq, Iran, and Syria. While Öcalan remains its honorary leader, in 2013 the executive council of the Kurdistan Communities Union (KCK) went through a major change and established a co-chairmanship shared by Cemîl Bayik, one of the group’s five original founders, and a woman, Büse Hozat, who is an Alevi-Kurd from Tunceli, Turkey. Murat Karayılan, another founder who acted as the single chair of KCK Executive Council since Öcalan’s imprisonment, became leader of the PKK’s military wing, the People’s Defence Forces (HPG).

The American and Turkish view

As American forces began withdrawing from Iraq in 2011, the Turkish government began negotiating with Öcalan, going so far as to propose giving immunity to those taking active part in the negotiations. The measure failed to pass in the Turkish Parliament, but it made the West wonder whether it was time to reconsider its view of the PKK.

The negotiation process since collapsed and no one in Turkey seems to have a clear idea about how to address the Kurdish problem—except militarily.

The YPG and the PYD

The PKK used the US war on terrorism to branch out in the region and beyond. In Syria, it created the Democratic Union Party (PYD) and its armed wing known as the People’s Protection Units (YPG). These organizations reside under the umbrella of the KCK—bringing it under direct command-and-control system of the PKK. They seek to establish an autonomous democratic confederation along Turkey’s border with Syria.

The United States considers these Syrian Kurds as indispensable allies in the war against the Islamic State of Iraq and al-Sham (ISIS) and has warned Ankara to dial down its opposition to the YPG. The Kurds would not have been able to push back the ISIS militants in the 2014 battle in Kobane without the support of the US air power.

The United States prefers to use the Syrian Kurds as its foot soldier instead of having to put more of its own boots on the ground. The US-led coalition continues to give air support, money, weapons, and intelligence to these Kurdish groups despite its NATO ally Turkey’s concerns over its national security.

The American and Turkish view

Turkey opposes the US decision to establish a 30,000-strong border force composed mainly of YPG militants at its border with Syria. The United States insists that cooperating with the Syrian Kurds is still the best option it has at hand. This isn’t about whether or not the United States knows that the PKK and YPG are connected.

Turkey launched a cross-border military operation into Syria on January 20 with the goal of clearing YPG/PKK militants from Afrin. The United States has urged Ankara not to advance on Manbij, where US troops are supporting the Syrian Democratic Forces that includes the YPG. No middle ground has yet been found bringing the US-Turkey relationship into uncharted territory.

Image: Kurdish fighters from the People's Protection Units (YPG) stand near a US military vehicle in the town of Darbasiya, Syria, near the Turkish border on April 28, 2017. (Reuters/Rodi Said)