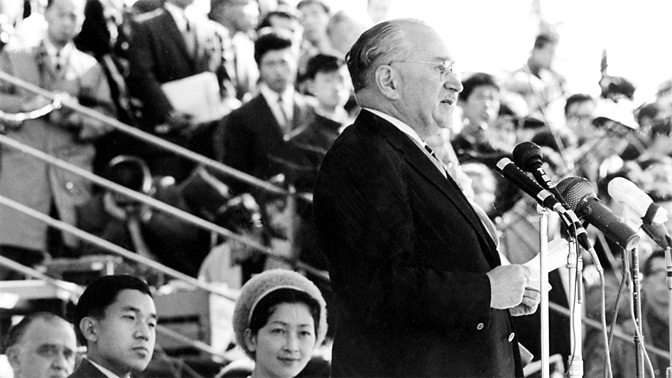 Many people have inspired me. Winston Churchill for refusing to compromise with evil, Ed Murrow for taking on corrupt power to protect free speech, Martin Luther King for reminding Americans that all people are born equal and Nelson Mandela for creating a nation out of forgiveness. But there is one who this week will be rightly celebrated because he not only gave many young men their broken lives back but overcame prejudice and discrimination – Sir Dr Ludwig “Poppa” Guttmann, the founding father of the Paralympics which start today in London.

He was an unlikely British hero. A German Jew who had been Germany’s top brain surgeon before the Nazis banned him from practicing in 1933. He had been born in what was then eastern Germany when the Kaiser was on the throne and fled with his family to Britain in 1939 to escape Nazi persecution. What he found in Britain appalled him and he refused to accept the latent prejudice in the British medical establishment of the time that condemned many young British servicemen crippled by war to a life of unjust marginalization or simply to die of infected bedsores or urinary infections. Their life expectancy was six months, condemned to die by prejudice as much as injury. When they arrived from the battlefield his patients were even shipped in coffin-like boxes in seeming anticipation of their pending demise.

Like all such pioneers he was not an easy man, as hard on his patients as the stifling officialdom that simply wanted to wish away his ‘paraplegics’. He fought for their dignity but also demanded equal commitment from them. At Stoke Mandeville hospital he slowly created a world-leading center for the treatment of severe spinal injury suffered in battle. He was possessed of that special quality that refused to accommodate the ‘old boy network’ that even today blights Britain. He did not come from the right school and he did not speak with the right accent and he had little time for those who spoke the language of integrity and dignity only to shuffle their feet when called upon to act in its name. Something I have seen all too clearly for myself of late.

His genius was to understand that quality of life was as much a battle for the spirit as the body. And it was that insight that led him to create the Stoke Mandeville Games, which took place on 28 July, 1948 the same day as the 1948 London Olympics opened. Indeed, he called his event the “Parallel Olympics”. From modest beginnings the Games have grown into the Paralympics of today in which 4200 athletes from 65 countries will compete in intense completion for much-prized medals. In so doing Guttmann reminded the world that there is no distinction at all between the able-bodied and the disabled.

Between 1948 and 1960 the Stoke Mandeville Games grew year on year as ever more war veterans and disabled people from across the world came together to compete. In 1960, a week after the flame had died on the seventeenth Olympiad the first official Parallel Olympics was held in Rome. It was not just the Games that Guttmann’s genius helped to inspire but the whole treatment of people with disabilities from housing to travel, from work to leisure.What he did was to change the mind-set of official and unofficial Britain alike and in time much of the world beyond.

Guttmann became a naturalized British citizen in 1945 and in 1966 was knighted by Her Majesty the Queen for his services to Britain and disabled people. He died in 1980. However, his spirit lives on and there is no doubt he will be looking down from on high at the 2012 Paralympics with much pride. The 2012 London Olympics were simply the warm up. If you want to see courage and utter determination to overcome adversity watch the main event. It is called the London Paralympics and it starts today.

Thank you, Sir Ludwig. You reminded us all that it is what people can do that matters, not what others think they cannot. It is a lesson that needs to be constantly taught and re-taught, especially to those empty souls who claim to uphold fairness and freedom from discrimination but all too often do not.