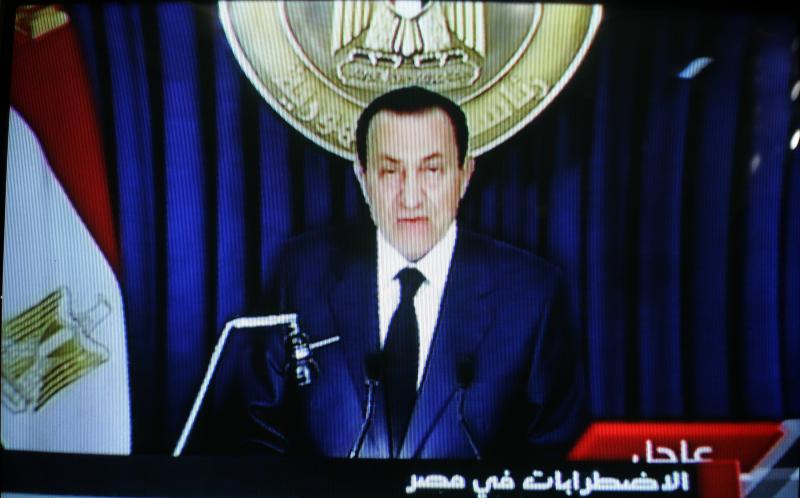 President Hosni Mubarak has been at the top or near the top of the Egyptian pyramid since 1975 when he was appointed vice president by his friend and mentor President Anwar Sadat.

It was during the 1969-1971 War of Attrition that followed Egypt’s total defeat in the 1967 Six Day War. The three major Egyptian cities along the canal — Suez, Ismailia and Port Said — had been leveled by Israeli bombs. Some 18,000 Soviets military advisers were in Egypt, courtesy of Gamal Abdel Nasser. They had installed batteries of SAM-2 anti-aircraft missiles to cover the 103-mile length of the Suez Canal, against Israeli air attacks.

As chief of staff of the Egyptian air force, Mubarak’s Soviet advisers informed him they had detected a gap in the Israeli radar screen around the Sinai Peninsula, which was occupied by Israel. They told him this was a golden opportunity to fly through the gap and drop a few bombs on Israeli-occupied Sharm el-Sheik as a morale-booster for a dispirited Egyptian population.

A skeptical Mubarak declined the invitation.

Five Soviet pilots climbed into Egypt’s MIG-21s and were ordered through the radar gap to bomb Sharm el-Sheik. Israeli fighters were waiting for them. Four of the Russian-piloted Egyptian aircraft were shot down. One skedaddled back to base. A Russian general was recalled to Moscow.

The Mubarak legend was established. He was promoted to deputy minister of war and, following the Yom Kippur War, he went up another rung to air chief marshal. Sadat had found a successor.

This reporter interviewed Mubarak a dozen times over 30 years. Perhaps the wisest piece of advice came in a lengthy conversation in Sharm el-Sheik, less than a week after the 9/11 terrorist attacks that caught me in the region.

"I know you are going to retaliate massively but there is one thing you must not do," he said. "Do not send American troops to fight a new war against the Taliban regime in Afghanistan. Such an operation must be conducted by Muslim troops alone."

If U.S. troops and other NATO contingents are dispatched, he added, America will find itself cast as the villain in a war against Islam, "which is precisely what Taliban wants."

So what would he suggest? I asked. "Egyptian, Jordanian and Moroccan troops, for example," he said. "And don’t forget the Pakistanis. They had a lot to do with standing up the Taliban after the Soviets pulled out following 10 years of failed operations."

Mubarak contributed two Egyptian divisions to the liberation of Kuwait in the first Gulf War (1990-91).

He is now paying the price for having been a close ally of the United States, a phenomenon that has achieved cliche status. He was sitting next to Sadat when Islamist extremists in the army riddled him with bullets, assassinated for signing a peace treaty with Israel.

Between the first and second world wars, Egypt hovered between faux colonialism and faux democracy, between bad and worse. It has only known six years of real democracy (1946-52) in its 5,000-year history.

Much has been written about revolutions occurring because the masses are poor and their conditions beyond tolerable. Egypt has to produce 1 million new jobs a year to keep up with population growth and more than half of its 83 million people eke out an existence on $2 a day.

The million-strong anti-Mubarak demonstration in Cairo’s Liberation Square was a bread-and-circuses affair that demanded blood — Mubarak’s.

Lame duck president, dead man walking, said would-be President Mohamed ElBaradei, a Nobel Peace Prize laureate who could see himself as an interim successor. Mubarak pledged he wouldn’t be running for president again in the fall, which was his intention all along, as he maneuvered to get his 48-year-old son Gamal into the job. Now both are out with no redeeming features.

With the Gamal ploy now squelched by Twitter, Facebook, al-Jazeera’s platoon of strategically placed correspondents openly siding with the million-plus demonstrators, Mubarak was backed into an electronic corner.

The conscript army is Egypt’s most respected — and popular — institution. It moved in after the police, unable to cope, was overwhelmed. Inmates from four Cairo prisons escaped in the confusion. Vandalized stores, houses and apartments followed.

The army’s tanks and armored personnel carriers — all U.S. supplied with an annual $1.2 billion in U.S. defense aid as compensation for the 1978 Camp David accords that established normal diplomatic relations with Israel — kept huge crowds from spinning out of control.

The main concern in the White House, State Department, Pentagon and governments throughout the Arab and Muslim world is the notorious Muslim Brotherhood. It stands for Islamic Shariah law and is close to the Iran-funded Hezbollah movement in Lebanon.

On Jan. 26, 1952, the Muslim Brotherhood’s terrorists torched some 300 buildings, including the old Shepherds (where this reporter had arrived the day before), and many luxury stores in Cairo. This led to martial law — and six months later to a bloodless army coup that ended the monarchy and brought Nasser to power, where he stayed for the next 18 years.

The Muslim Brotherhood tried and failed to kill Nasser in 1954.

During World War II, it sympathized with the Nazis against what it then called the colonial occupation of Egypt.

In recent years, officially banned, it has morphed into a regular political party and commands about 20 percent of the popular vote. Its political philosophy is certainly closer to Iran’s thuggish theocrats than to what they brand American colonialism.

Democracy in today’s Egypt is the antithesis of stability.