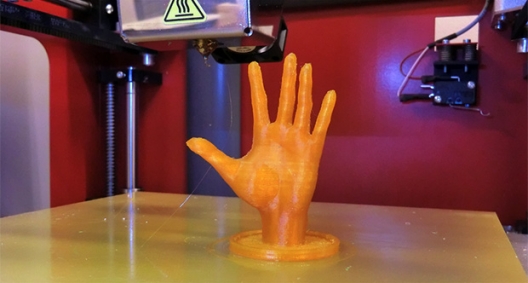 New technologies are converging in a cresting tsunami. Robotics, autonomous vehicles, big data, the “internet of everything,” nanotechnology and other technology sectors are being mashed up in ways incredible to those who studied engineering even as recently as the 1990s.

In particular, 3D printing (additive manufacturing)1 revolutionizes the future with its potential to make almost any object, as well as to create complex objects impossible to fabricate via traditional manufacturing approaches. A wonderful aspect of 3D printing is its breadth of applications. From aerospace components to food, human organs, clothing, buildings – potentially world-changing 3D printing applications emerge seemingly every day.

Now on the horizon is 4D printing, a disruptive technology with profound implications for society, the economy, and the global operating environment of government, business and the public. An Atlantic Council report published this week explains 4D printing, a form of “programmable matter” with unprecedented potential for transforming digital information of the virtual world into physical objects of the material world. The fourth dimension in 4D printing refers to the ability of the printed objects to change form and function after they are produced, thereby providing additional capabilities and performance-driven applications. Such may be the stuff of science fiction, but it is fast becoming science reality.

. . . the science, engineering, and design of physical matter that has the ability to change form and/or function (shape, density, moduli, conductivity, color, etc.) in an intentional, programmable fashion. PM may come in at least two forms: (1) objects made of pre-connected elements that are 4D printed* or otherwise assembled as one complete structure for self-transformation, and (2) unconnected voxels** that can come together or break apart autonomously to form larger programmable structures. PM encompasses, yet goes beyond, a range of technological capabilities—including 3D printing, micro- robotics, smart materials, nanotechnology, and micro-electromechanical systems (MEMS), to name a few.

* 4D printing, where the fourth dimension entails a change in form or function after 3D printing, is one recent example of PM that allows objects to be 3D printed and then self-transform in shape and material property when exposed to a predetermined stim­ulus, such as being submerged in water or exposed to heat, pressure, current, ultraviolet light, or other energy source.

** A voxel is a volumetric pixel, often used to define the fundamental unit of digital space and Programma­ble Matter. Voxels can be both digital and physical. Digital voxels are computational representations in 3D models. Physical voxels may be comprised of materi­als as diverse as basic raw materials (e.g., titanium), nanomaterials, integrated circuits, biological materi­als, and micro-robotics, among others. 2

To grasp the import of this definition, consider engineering education. Undergraduate mechanical engineering students typically take two core courses that are taught in consecutive semesters. In the first course, Statics, objects such as bridges are studied for their motionless engineering aspects. In the second course, Dynamics, objects such as engines are studied for their motion-filled engineering aspects. By creating programmable matter, we are infusing objects with dynamic potential, i.e., they will be able to change form and/or function after they are made. Thus, programmable matter is paradigm-shifting within design and engineering; it could open whole new vistas for how we interact with objects.

Imagine a place in which solid material objects can morph into new shapes or change properties, either at the command of an individual or in a pre-programmed response to changing external conditions such as temperature, pressure, wind or rain. That world — in which things are not quite what they seem — is on the horizon. It is a world of potentially huge benefits, from airplane wings that change form in flight to furniture and even buildings that self-assemble and reassemble for different functions. Programmable matter could thus subsume many of the on-going technology convergences into a new genre of dynamic objects. If today’s research in programmable matter is successful, society and national security will change in ways only dreamed of by engineers and policy makers.

Thomas A. Campbell is a research associate professor at the Institute for Critical Technology and Applied Science (ICTAS) at Virginia Tech and a non-resident senior fellow at the Atlantic Council.

Image: A 3D-printed model hand. The creators of a 4D version might seek to make it move or change in response to stimuli. (Flickr/Creative Tools/CC License)