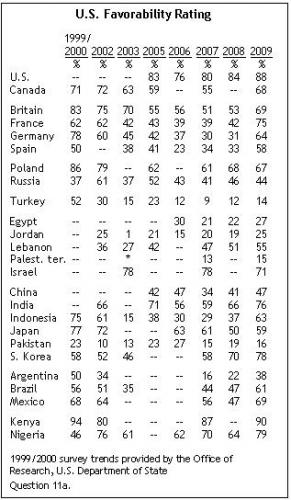 While the substance of President Obama’s foreign policy is almost indistinguishable from that of President George W. Bush, the difference in style is undeniable.  And, if a new Pew poll is right, it very much matters.

The image of the United States has improved markedly in most parts of the world, reflecting global confidence in Barack Obama. In many countries opinions of the United States are now about as positive as they were at the beginning of the decade before George W. Bush took office. Improvements in the U.S. image have been most pronounced in Western Europe, where favorable ratings for both the nation and the American people have soared. But opinions of America have also become more positive in key countries in Latin America, Africa and Asia, as well.

Signs of improvement in views of America are seen even in some predominantly Muslim countries that held overwhelmingly negative views of the United States in the Bush years. The most notable increase occurred in Indonesia, where people are well aware of Obama’s family ties to the country and where favorable ratings of the U.S. nearly doubled this year. However for the most part, opinions of the U.S. among Muslims in the Middle East remain largely unfavorable, despite some positive movement in the numbers in Jordan and Egypt. Animosity toward the U.S., however, continues to run deep and unabated in Turkey, the Palestinian territories and Pakistan.

Israel stands out in the poll as the only public among the 25 surveyed where the current U.S. rating is lower than in past surveys.1

In contrast, in Germany favorable opinion of the U.S. jumped from 31% in 2008 to 64% in the current survey. Large boosts in U.S. favorability ratings since last year are also recorded in Britain, Spain and France. In its own hemisphere, America’s image rose markedly in Canada, Mexico, Argentina and Brazil. Improvements in U.S. ratings are less evident in countries where the country’s image had not declined consistently during the Bush years, including Poland, Japan and South Korea. Opinions of the U.S. remain very positive in the African nations of Kenya and Nigeria, while increasing significantly in India and China.

The numbers are quite staggering, indeed, especially the doubling in France and Germany.  While the United States is not viewed as favorably in any of the major countries as it was in 2000, the trends are obviously encouraging.

Presumably, this changed attitude will help at least at the margins.  Obama’s popularity makes it easier for world leaders who want to work with the United States to do so and harder for those who want to hammer America as a diversion from domestic woes to do so.

At the same time, however, domestic political considerations and wider national interest concerns will continue to persist.  Germany, France, and the UK are not going to suddenly reverse course on major issues because of their warm feelings for Obama.   Nor, certainly, will China or Russia.

Still, this is unquestionably good news.