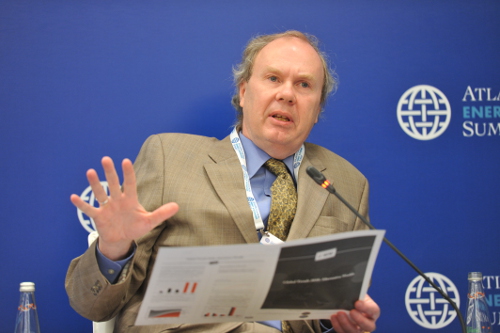 Individual empowerment, fueled by increasing prosperity, greater educational oppourtunities, especially for women, and the technological revolution are the megatrends of the coming decades, proclaims the US government’s chief strategic forecaster.

Speaking at the Atlantic Council’s Energy and Economic Summit, Dr. Mathew J. Burrows, counselor at the US National Intelligence Council (NIC) and director of the “Global Trends 2030” report, declared “We have not seen this kind of rise in terms of the magnitude anywhere else in history, and it is what is underlying the rise of these new states.”

The NIC prepares the nonpartisan and unclassified global trends report every four years to coincide with the transition between presidential terms. The report is aimed at the president and his senior staff but other US agencies also use it in conducting their strategic review.

While this year’s report, which will be launched December 10 at a NIC-Atlantic Council event at the Newseum, is telling “more or less an optimistic story,” according to Burrows, others have divergent views about what these trends mean.

The positive side, according to the report, shows these trends leading to democracy: greater political participation, institutions that uphold rule of law, human rights, and free markets. But there is also a negative side, particularly with regard to access to lethal destructive technologies that could fall into the wrong hands. “[S]o when you’re thinking long-term…insurgency…you’re going to be facing much more lethal, much more destructive forces in terms of terrorism, particularly [in areas such as] bio, cyber,” said Burrows.

These are not surprising conclusions. Technology has indeed contributed to the recent peaceful protests in Russia against Vladimir Putin’s authoritarian rule – the largest since the end of the Cold War – and provides greater access within Russia to independent media than the state-controlled television. Technology played a similar role in the protests that swept the Middle East. At the same time, extremist forces, such as the Taliban in Afghanistan use the same technology to spread its extremist ideology to the Afghan population. The possibility of extremist groups using technology to further their aims through violence is a serious one. Certainly the negative side is something Burrows acknowledges. “You can look at historically [the] rise of the middle class,” he said, “lots of detours [to] fascism, populism.”

With much political discourse now dominated by the subjects of China’s rise, the “pivot to Asia,” and the perception of US decline, this too is worth considering. Many experts predict China’s growth is currently unsustainable. The Chinese economy is already slowing significantly, and experts predict the newly elected leadership won’t differ much for its predecessor. “Expect more of the same: authoritarian stagnation and gridlock at home, with increased abrasiveness abroad,” wrote David Shambaugh, professor and director of the China Policy Program at George Washington University. China indeed achieved much growth in recent years, but often at the cost of internal repressions (including control of the internet) and aggressive behavior towards its neighbors. This not only echoes the positive and negative trends discussed at the Summit, but also serves as a reminder that the future—including that of a US decline— is in many respects a matter of choice.

Anna Borshchevskaya is an assistant director of the Atlantic Council’s Patriciu Eurasia Center.