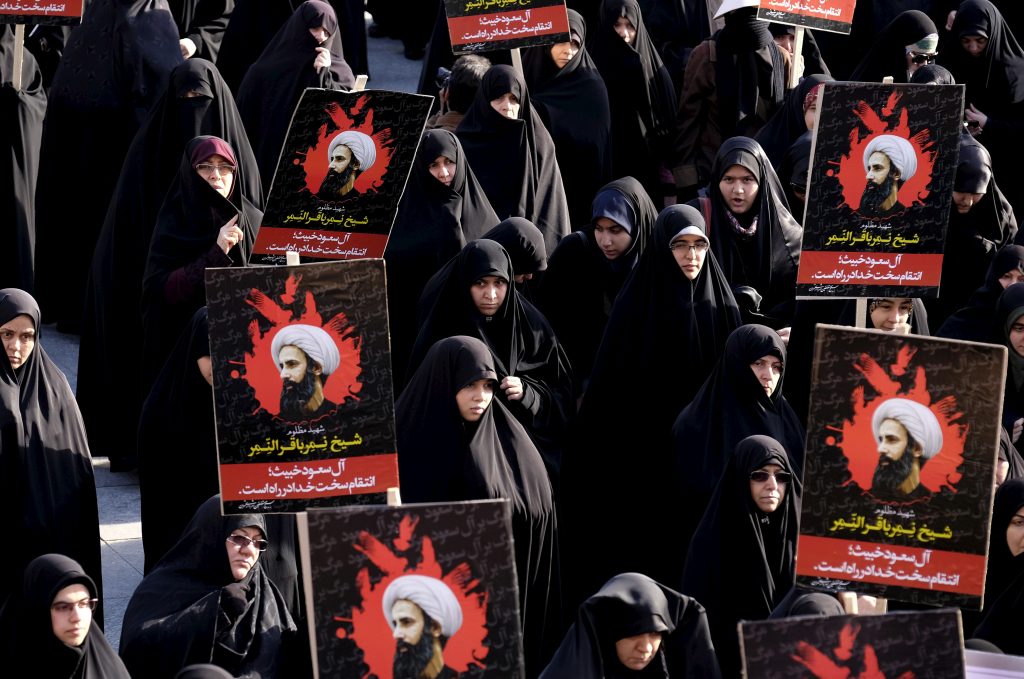 Iranian protesters hold pictures of Sheikh Nimr al-Nimr, a Shi’ite cleric who was executed in Saudi Arabia on January 2, during a demonstration in Tehran on January 4. Saudi Arabia broke off diplomatic ties with Iran after its embassy in Tehran was attacked in the backlash that followed al-Nimr’s execution. (Reuters/Raheb Homavandi)

Saudi Arabia’s decision to break diplomatic ties with Iran represents another chapter in the politics of fear that have dominated Saudi military and diplomatic moves since the ascension of King Salman just shy of a year ago. The fear finds its main source in the Saudi conviction that Iran is intent on displacing it as a regional power and thus needs to be countered in Syria, Iraq, and Yemen. The Saudi leadership also sees elements of its own Shia population as a threat to stability and as agents of Iranian influence. The Islamic State of Iraq and al-Sham (ISIS) and other Sunni terror groups operating in and around the kingdom are an added challenge, but one that is not perceived by Saudi leaders to be on the same level as the threat posed by Iran.

The US invasion of Iraq in 2003 convinced the Saudis and many others in the Gulf that the United States was a dangerous ally. It is almost a universal given among Sunni elites in the Gulf that the United States “delivered” Iraq to Iran, either through its incompetence or through an elaborate long-term conspiracy to contain the influence of Sunni countries in the Gulf. Their suspicions deepened even further with the Obama administration’s moves to negotiate a nuclear agreement with Iran. Despite round after round of “reassurance” by the United States, including the meetings in 2015 with Gulf Cooperation Council (GCC) leaders and President Obama at Camp David and the subsequent summit between the US President and King Salman, the Saudis were not and are not reassured. They view the nuclear agreement as something far more significant: an opportunity for Iran to emerge from relative isolation and once again assert itself as a regional power. This fear of Iran’s hegemonic ambitions became the centerpiece of King Salman’s more assertive defense policies and the rapid clip of Saudi purchases of advanced weapons in 2015.

But the Saudis have found that asserting leadership is one thing, winning it is another. It is safe to say that the Saudis did not expect to be bogged down in a war in Yemen against the Houthis after months of bombing and ground action. In Syria, despite their demands that Bashar al-Assad must go, the Saudis seem to have had little influence on the ground war and little appetite for further involvement. It is obvious that the break in diplomatic relations between Saudi Arabia and Iran will complicate any negotiated settlement in Syria, but it is also equally clear that those negotiations already reflected the fundamentally different positions of Iran and Saudi Arabia.

The execution of Sheikh Nimr al-Nimr (and forty-six other people) is another chapter in the politics of fear, this time the Saudi leadership’s fear of a small segment of its own Shia population. The executions, along with the decision to resume bombing in Yemen, were clearly intended to send a message of Saudi resolve and strength to both domestic and international audiences. But rather than strength, the image of Saudi Arabia that has emerged is a flailing regional power, insecure in its borders and unable to effectively pursue its objectives abroad. The fact that only Bahrain and Sudan joined in breaking diplomatic relations highlighted ambivalence in the GCC about the Saudi policies. The United Arab Emirates followed with some half measures against Iran. Other GCC members may not even do that. Despite the Iranian role in fueling tensions after the executions, they seem to have already won this round of the regional propaganda war.

As the United States moves into an election year, the politics of fear will likely also dominate the statements of candidates, many of whom have already descended deeply into that well. However, there will also be some confusion among the candidates about whether the Saudis are friend or foe, part of the problem or part of the solution in the Middle East. The challenge in the last year of the Obama administration will be to keep the pot from boiling over on its watch.

Richard LeBaron is a Nonresident Senior Fellow at the Atlantic Council. He is a former US Ambassador to Kuwait.