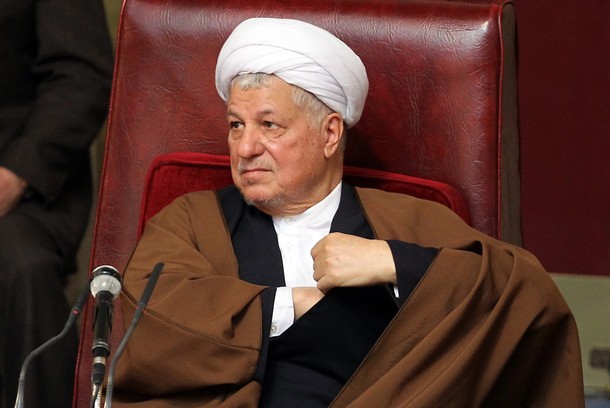 Last month, two former senior politicians who ran against President Mahmoud Ahmadinejad in 2009 disappeared into political detention. On Tuesday, March 8, Ayatollah Akbar Hashemi Rafsanjani — a former president and for three decades one of Iran’s most powerful politicians — lost his post as head of the Assembly of Experts, the body of clerics that theoretically supervises the Supreme Leader of Iran and chooses his successor.

Rafsanjani’s replacement by Ayatollah Mohammad Reza Mahdavi Kani, an elderly conservative who is bound to a wheelchair, is the culmination of a slow-moving purge by supreme leader Ayatollah Ali Khamenei, who, ironically, acquired the top job at Rafsanjani’s instigation in 1989. The apparent intent is to strip other Iranian institutions of any authority, further demoralize Iran’s opposition Green Movement, and prove that the Arab uprisings of the past two months will stop at the border with Iran.

However, by silencing so many of those who worked within Iran’s complicated political system to institute reforms, Khamenei is narrowing his base of support and increasing the likelihood that Iranians will take to the streets or, at a minimum, boycott future elections and deny the regime any semblance of legitimacy.

"Rafsanjani was the last obstacle to consolidation of power of the hard-liners," says Mehdi Khalaji, an Iran expert at the Washington Institute for Near East Policy. His removal is "the last nail in the coffin of reform in Iran."

Rafsanjani, 76, is no democrat. Nicknamed "the shark" for his shrewdness, he was president from 1989 to 1997 while Iran executed opponents at home and abroad. His family amassed great wealth through political connections. But he was also a pragmatist who sought to rebuild the Iranian economy after the 1980-1988 Iran-Iraq War, relaxed social restrictions on the Iranian people, and tried to improve relations with the United States.

In 2005, he decided to run for president again. One of his sons, Mehdi Hashemi, told me at the time that if his father won, he would turn the job of supreme leader into a ceremonial head of state like "the king of England" and let Iran’s elected institutions have full authority. Hashemi also warned, presciently, that "if my father doesn’t run, all of the country will be under one group, and after that we won’t have any free elections."

Needless to say, such comments did not endear Rafsanjani to Khamenei, who threw his support to Ahmadinejad and may have rigged the first round of elections to ensure that his chosen candidate made it to a second round, in which he beat Rafsanjani.

In the 2009 presidential election, Rafsanjani backed Mir Hossein Mousavi, who had been prime minister during the Iran-Iraq War. Rafsanjani’s refusal to endorse Ahmadinejad’s disputed re-election led to the former president being stripped of his role as chief Friday prayer leader of Tehran, a key position for influencing public opinion.

Over the past year and a half, Rafsanjani has tried to occupy a middle space between Khamenei and the Green Movement and encourage the supreme leader to find a political accommodation with Iranian reformers. Instead, Khamenei authorized the arrest of Mousavi and another opposition presidential candidate, Mehdi Karroubi. Both disappeared from their homes last month, and there are conflicting reports about their whereabouts.

Rafsanjani retains one last position in the Iranian system — head of the Expediency Council, which is supposed to resolve disputes between the different branches of government. However, the council has been largely inoperative since the 2009 election, and the council’s term runs out next year.

Although Rafsanjani has lost political clout, his family still has financial resources, presumably much of it stashed abroad. His son, Mehdi Hashemi, has been working from a base in London to bolster the Green Movement. Another son, Mohsen, just resigned as head of the Tehran subway after Ahmadinejad refused to allocate money for a project that had been appropriated by the parliament. A daughter, Faezeh, has been arrested and briefly detained several times for joining street demonstrations. The family will likely redouble efforts to undermine Ahmadinejad and Khamenei.

The gathering purge will also unsettle other members of the Iranian political elite — particularly clerics in the theocratic center, Qom, who have supported Rafsanjani over the years and respect his long service to the Islamic Republic. Khalaji, of the Washington Institute, said that Rafsanjani’s removal will expose a prominent clerical family, the conservative Larijanis, to the wrath of Ahmadinejad and that they may be the next target for marginalization. Ali Larijani is currently speaker of parliament; his brother, Sadegh, is chief of the judiciary.

It’s doubtful that Kani, Rafsanjani’s replacement, will have any real power. As the new head of the Assembly of Experts — a group of 86 clerics that is elected every eight years (the next election is in 2014) — he will exert little if any authority over Khamenei. "They needed an old ayatollah with no ability to do anything," Khalaji said. "They did not pick a young man with his own agenda."

Yet Khamenei may come to regret his latest move. It has been the pattern in Iranian politics that just when all opposition appears to have been eliminated, new fissures emerge among those in power. Khamenei, 71, has been long rumored to be suffering from cancer — his death would likely set off a scramble for his replacement. Then there is the presidency. According to Iranian law, Ahmadinejad must step down after new elections in 2013. Among those likely to run is the mayor of Tehran, Mohammad Baqer Qalibaf, a pragmatic conservative who, like Ahmadinejad, is a veteran of the Iran-Iraq War.

The Iranian regime has impressive powers of repression and has shown no hesitation about using them. But its growing intolerance of any semblance of dissent runs against the region’s democratic wave and certainly diminishes Iran’s theocratic regime as a model for the Middle East’s aspiring democrats.

Inspired by the Arab revolts, protesters returned to the streets of major Iranian cities last month for the first time in more than a year. More protests are planned in the lead-up to the Persian New Year on March 21.

Khalaji notes that Iranians are still traumatized by the 1979 Islamic Revolution and the carnage of the Iran-Iraq War. "I don’t know anyone who wants to die anymore" for a cause, he says. But he acknowledges that Iranian politics are unpredictable. "The system can last for the next 20 years, or it can change tomorrow," Khalaji said.