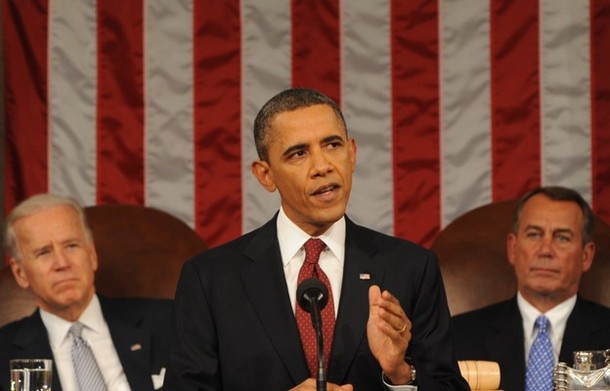 The State of the Union (SOTU) address is not usually focused on foreign policy, and rightfully so. With our current economic woes, education problems, and immigration issues, we have plenty of reason to look inward. Still, President Obama missed a great opportunity last night—one that would have only required a sentence or two. I found the address lacking on one major front: its lack of reference to our transatlantic ties and allies.

Europe was mentioned only twice in his 65-minute address. First, he declared “[o]ur oldest alliances in Europe and Asia are stronger than ever” as he began his montage of examples of US reach and leadership felt around the globe. He followed this statement by describing our “iron-clad commitment to Israel” and the fact that “America is a Pacific power,” concluding that “America is back.”

Can you even remember the second vague mention of Europe in the address? I can’t blame you, and it probably shouldn’t be counted. In fleshing out his argument that “America is back” and more respected globally, he said that “leaders…are eager to work with us…from Tokyo to Berlin; from Cape Town to Rio; where opinions of America are higher than they’ve been in years.” Certainly, Berlin is in good company with other robust allies of the United States.

Many may contend that these mentions were more than enough. And for the American audience, perhaps they were. I would agree had he not discussed several other conflicts and military operations in which our European allies are intimately involved. He mentioned our large but not singular role in the ousting of Gaddafi, along with the impending transition of rule to the Afghan people, and a vague reference to a possible role in Syria (“I have no doubt that the Assad regime will soon discover that the forces of change can’t be reversed”). He concluded this section by discussing America’s determination to “prevent Iran from getting a nuclear weapon.” This list of current global security challenges are all events, conflicts, and efforts in which our allies in Europe have been uniquely involved, fighting alongside America for the sake of international security and human rights.

The final nods of the speech to our international commitments and robust leadership missed a real opportunity to pay homage to the transatlantic community. At a time when perception of our commitment to Europe is at a real low, Obama neglected to mention our robust transatlantic ties and defense cooperation, a part from one phrase (the first example) of recognition in which it was coupled with our Asian allies (the very region by which Europe is afraid of being replaced).

Yes, as the name implies, the SOTU is an address to the American people about the state of their country. But it is also a clear and unmistakable message to the rest of the world on where America stands. Obama certainly used this speech as an opportunity to speak to the Iranian, Chinese, and Syrian regimes. He did not, however, take the occasion to speak to his European allies, who have worked in coordination with the United States on all of the key foreign policy issues referenced, and who will certainly engage with the United States on future conflicts.

Good foreign policy is not just about speaking clearly to challengers and enemies; it must also bolster relations with global partners who share similar goals and values. Last night’s speech failed at this critical task.

Riley Barnes is an assistant director with the Atlantic Council’s International Security Program.