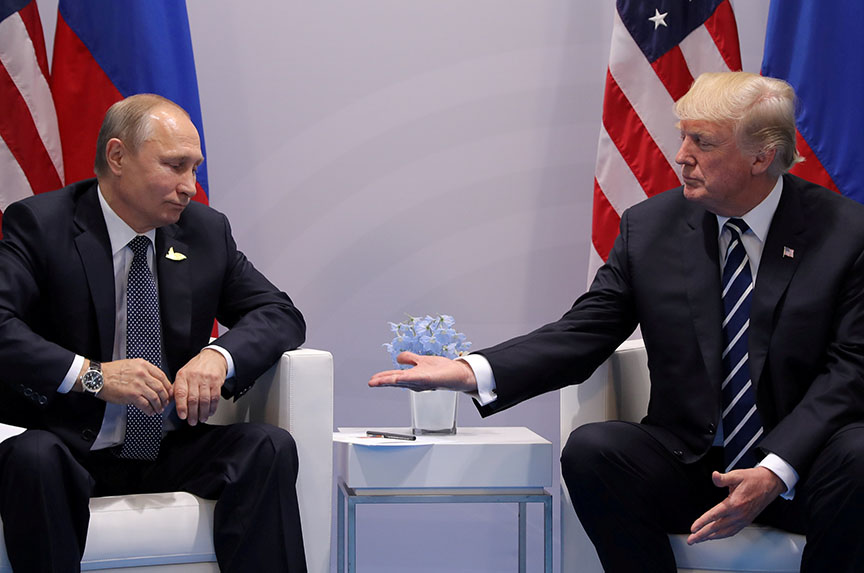 In a speech March 9 at the Atlantic Council, US Department of Treasury Undersecretary Sigal Mandelker, the Trump administration’s top sanctions official, confirmed that new Russia sanctions are being prepared, and suggested that they would target members of Russian President Vladimir Putin’s power structure.

This was just one of the items covered in a half-day conference hosted by the Atlantic Council’s Sanctions Initiative. The event convened policy makers, sanctions veterans of previous US administrations, experts, foreign diplomats, and business representatives.

The good news. In a powerful speech, Mandelker showcased Treasury’s professional competence on sanctions, celebrated the department’s strong civil servants, and linked the sanctions tool to the higher foreign policy purposes it seeks to advance, among them human rights; combating corruption and abuse; and pressure against violent, repressive, and dangerous governments (she mentioned North Korea, Russia, and Iran). Notably, her speech was rooted in the American foreign policy tradition of advancing in parallel US interests and values, not a zero-sum transactional approach.

She covered the “big three” sanctions regimes in credible fashion:

Russia. Pushing back on a common media narrative, Mandelker noted the administration’s mostly solid implementation of Russia sanctions to date—in response to Russian aggression against Ukraine, for North Korea sanctions violations, and human rights sanctions, both under the Magnitsky Act and the Global Magnitsky Act (a new human rights and anti-corruption sanctions regime).

Mandelker confirmed that the administration is preparing additional Russia sanctions, drawing from the classified version of the so-called “Kremlin Report,” which is an analysis—by many accounts excellent—of Russian President Vladimir Putin’s power structure, which the Trump administration prepared under Section 241 of the Countering America’s Adversaries Through Sanctions Act (CAATSA). This was another welcome indication that the administration is abandoning the risible public list it submitted under Section 241 and turning to a potentially powerful sanctions tool partly in response to Russian meddling in the US elections in 2016 and continued disinformation operations.  (A well-prepared set of new sanctions against members of Putin’s inner circle could help restore the Trump administration’s credibility after mixed signals [to put it mildly] about Russia’s election interference and slow implementation of CAATSA.)

Unexpected for the Trump administration, Mandelker emphasized human rights and anti-corruption sanctions, emphasizing that by putting “on notice” human rights violators and corrupt officials, the United States was also advancing its interests.  This “campaign” (her word) to apply anti-corruption and human rights-related sanctions is striking in this administration, which often uses more narrow language to define US interests.

North Korea.  Mandelker gave context to the announcement the previous evening of a near-term meeting between US President Donald J. Trump and North Korean leader Kim Jong-un, suggesting (fairly) that it reflected the application of intensified US and UN sanctions against North Korea, and reiterated—as have others in the Trump administration—that sanctions will remain in place pending North Korea’s denuclearization.

Iran. Avoiding the issue of whether the United states will pull out of the nuclear deal with Iran, Mandelker emphasized Iran’s destructive behavior in the region and focused on current US sanctions against the Iran’s Islamic Revolutionary Guard Corps (IRGC) and other sanctions measures which lie outside the scope of the Joint Comprehensive Plan of Action (JCPOA, the formal name of the nuclear deal). Her language seemed designed to combine toughness without taking down the JCPOA but was hardly indicative of the administration’s ultimate intention.

Questions and challenges. Mandelker impressed the audience both with her solid outline of the major sanctions regimes and her unexpected values-based approach.  But discussions during the two panels (one on public policy and the other on private business perspectives) and after her speech, suggest how difficult it will be to maintain this direction.

Sanctions, policy veterans pointed out, require broad international support to be effective.    Effective sanctions against Russia require European buy-in. Sanctions on North Korea—especially if we escalate should the Trump’s high-risk/high-gain gambit in meeting with Kim fail—require firm support from Japan and South Korea, and substantial support from China.  We want the Europeans to put more pressure on Iran outside the framework of the JCPOA.  Can the United States capture and maintain such support from our allies if we are eating into our political capital with these governments by attacking their exports on weak grounds—as is the case with Trump’s new tariffs on steel and aluminum imports?

An active sanctions policy requires resources. A combination of a strong State Department sanctions team combined with the larger and effective Treasury sanctions offices can be powerful [Full disclosure:  I was the State Department coordinator for sanctions policy during the second Obama term and worked closely with Treasury].  Business representatives stressed eagerness to comply with sanctions, but urged clarity, consistency and predictability from the administration.  This is reasonable.  But Treasury’s Office of Foreign Assets Control (OFAC) is being asked to do more and more with limited resources, and State’s sanctions coordination office has been abolished, effectively replaced by one person (an excellent officer, but still just one person), and there is no assistant secretary for economic and business affairs or economic undersecretary in sight.  Insufficient resources mean weak policy.

On sanctions policy as in other areas, professionals in the Trump administration—both career officials and many political appointees—seem to be doing their best. And that is often pretty good. One big question is whether they will get the support and running room they need to advance American interests.

Daniel Fried is a distinguished fellow in the Atlantic Council’s Future Europe Initiative and Eurasia Center.