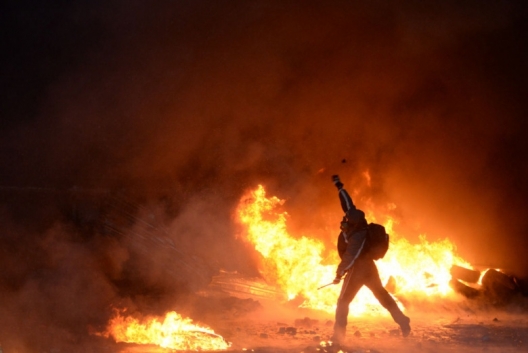 Since November, when Ukraine’s political turmoil reached a critical point, we’ve seen a flood tide of punditry that can be described as follows: Lots of gloom, dollops of doom. It’s time for some (cautious) optimism. For internal and external reasons, Ukraine appears to have turned the corner.

Early in this crisis, I ventured the assessment that there was little chance of a full-blown Russian invasion of Ukraine. But after Russia’s annexation of Crimea in March, following a bogus referendum that contravened Ukraine’s constitution, there was much speculation that the Donbass could be next on Putin’s list. But the reality all along has been that he can’t pull off in eastern Ukraine what he did in Crimea. In fact, the Crimean model, if you will, is not what he has had in mind for the Donbass—and for good reasons.

The Crimea’s pro-Russian majority provided a hospitable setting and a social base for Russia’s landgrab. The Donbass lacks a Russian majority: in the two provinces that have witnessed the most upheaval, Donetsk and Luhansk, they constitute less than 40 percent of the population, in Kharkiv, about 26 percent. In Crimea, thousands of troops were already on the scene because Russia’s Black Sea Fleet is headquartered there on a long-term lease, and the infrastructure for accommodating more of them existed, enabling the rapid bulking up that occurred. In the Donbass, Russian forces would lack a similar support structure. The logistical systems for supplying and sustaining them would have to be created, probably amidst popular resistance. That’s not impossible to do, but it’s much harder.

Crimea is a small place; Russian troops swarmed it quickly. The Donbass is a big place; Putin would have to deploy many more troops to wrest control of it. He could do that, but it would be a provocative act. The EU and the United States are now in sanctions mode. So far, the punishment inflicted on Russia has been confined to a coterie of senior leaders and fat cats, but an invasion of Ukraine would end Europe’s divisions and hesitation about stiffening and expanding it. Russia would face sector-wide Western sanctions covering critical areas such as banking and energy. Putin understands this as well.

The idea of union with Russia had considerable support within Crimea’s ethnic Russian majority, though not among its Tatars and Ukrainians. Polls in the Donbass, by contrast, have shown consistently that only a small minority (a tad over 15 percent) favor secession in what is a Russified region. The same is true of popular enthusiasm for the armed bands that have commandeered key communication points and buildings in the Donetsk, Kharkiv and Luhansk provinces, which explains their inability to mobilize mass support. Yes, they have a following, but nothing resembling a vast grassroots movement.

There were no massive rallies once the Ukrainian government started battling these groups in April. Even the May 2 clashes in Odessa, which killed some forty-two people, didn’t generate a tide of pro-independence rallies in Ukraine’s east and south; nor did the deaths of about twenty-five people in Mariupol, another Black Sea port city, on May 9. There’s plenty of suspicion in the Donbass about the Kyiv government, but there’s little longing for Yanukovych. Nor—as polls make clear—do most Donbass residents approve of Russia’s efforts to shape Ukraine’s politics.

Now the multibillionaire Donetsk oligarch Rinat Akhmetov has condemned secession, warning that it would create an economic calamity, and the sails of the separatists, whom he castigated, have lost even more wind. Akhmetov, who had been cagey about revealing his views on the future of the Donbass, has strong ties to Russia and may well have acted after consulting Moscow.

Putin, who has plenty of information about political trends in the Donbass, has shifted course. On May 7 he made two unexpected moves. First, he failed to back the looming referendums in Donetsk and Luhansk and asked that they be postponed. (Tellingly, the voters weren’t asked to say yea or nay on secession but rather on “self-determination.” The vagueness of the wording was not accidental: the architects of the referendums understood that support for fracturing Ukraine and attaching the Donbass to Russia was shallow.)

When the referendums were held anyway, the Kremlin’s endorsement was tepid at best. The separatist leaders had hoped that Putin would seek parliamentary approval for an annexation in the wake of the referendums, as he had in Crimea. He did not. Second, having repeatedly declared the interim Ukrainian government and its plan for a presidential elections on May 25 illegal, Putin surprised just about everyone by declaring that the elections were a “step in the right direction.” He did add that Ukrainians should be given an explanation, after the vote, of how their rights would be safeguarded. But who would quarrel with that?

This brings us to the election itself. There has been concern that it could have made matters worse by angering the Kremlin and deepening Ukraine’s east-west divide. The apprehensions on this score are understandable; there have certainly been instances in which the rush to the ballot box has aggravated crises. Polls can increase polarization. But a clean election on May 25—Kyiv and outside monitors must make sure the vote is free and fair—could have effects that help restore calm. Here’s why:

Petro Poroshenko will likely win the presidential poll. Yulia Tymoshenko will make a strong showing and continue playing an important part in politics. Neither has ever been aligned with Ukraine’s far right, the Kremlin’s bête noire. Both have a long history of dealing with Russia and are familiar figures to Moscow. Poroshenko, the “Chocolate King,” is a tycoon with substantial business interests in Russia and understands that Ukraine will be ill served by getting caught in a conflict spiral with Russia. And Putin knows that the next president won’t come from the Party of Regions, whose electoral base is in the Donbass, and that Poroshenko is a man with whom he can work.

The election will also help calm easterners’ fears about the right-wing nationalist parties and movements, particularly Right Sector and Svoboda, rooted in western Ukraine. It would be a big mistake for Kyiv and the West to dismiss these apprehensions as nothing more than the product of a Kremlin-run misinformation campaign (not that there hasn’t been one). A sensible policy toward the Donbass requires that they be taken seriously.

The presidential election will show that for all the attention Ukraine’s far right garners, it has meager support—and no chance of taking the political helm. The parliamentary elections, which won’t be held till 2017, will confirm this. The mainstream parties will dominate the Verkhovna Rada.

None of this means that the crisis is over. But the apocalyptic scenarios won’t materialize. To ensure that the turmoil continues to subside, Ukraine’s new president should take some immediate steps to reassure the east. One would be to assuage lingering anxiety about the future status of the Russian language. A second would be to draw prominent eastern political leaders into the new government. Involving Donbass politicians in the design and implementation of Kyiv’s plan to devolve power to the localities would be a third. Done properly, it could end the controversy over federalization, which Russia and many in the Donbass want and Kyiv opposes. Reassuring Russia on Ukraine’s NATO membership, ideally by declaring neutrality, would be a fourth.

Could we still witness a train wreck in Ukraine? Sure. Is that the most likely outcome? No—thanks to what’s happened lately.

Rajan Menon is the Anne and Bernard Spitzer Professor of Political Science at the Colin Powell School, City College of New York/City University of New York, and Nonresident Senior Fellow at the Atlantic Council.