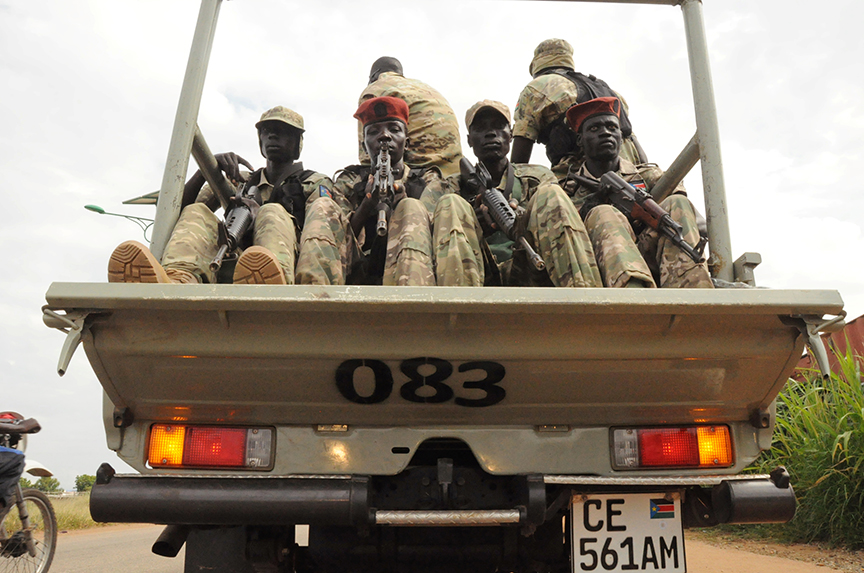 A sharply divided United Nations Security Council will likely end up delivering mixed messages this week on a rare visit to South Sudan—a nation that is once more on the brink of full-blown civil war, according to the Atlantic Council’s J. Peter Pham.

The three-day visit, which starts on September 2, comes on the heels of a controversial Security Council resolution to deploy 4,000 additional peacekeepers to South Sudan. The government of South Sudan has rejected the plan and at least two Security Council members—Russia and China—have expressed concerns about South Sudan’s sovereignty.

“I am not sure the tension between ending the conflict and the sovereignty question can be easily resolved,” said Pham, who is director of the Atlantic Council’s Africa Center.

“So, in many respects, the UN Security Council shows up in South Sudan divided and delivering mixed messages,” he added.

Fears that South Sudan is sliding back toward civil war were exacerbated in July when clashes between forces loyal to President Salva Kiir and Vice President Riek Machar in the capital Juba left hundreds dead. Machar subsequently withdrew with his forces to the bush and is currently in Khartoum where he is reportedly undergoing medical treatment.

In August of 2015, Kiir and Machar agreed to end the conflict that erupted in December of 2013 when Kiir accused Machar of plotting to overthrow him. The United States found no basis for those accusations.

Under the terms of a peace deal reached last summer, Kiir reappointed Machar as his vice president in a transitional unity government. Kiir has since appointed Taban Deng, a member of the Nuer community to which Machar also belongs, as his new vice president.

South Sudan gained independence from Sudan in 2011 after more than two decades of war that left around two million people dead. Pham was pessimistic about the prospects of peace in South Sudan.

“First and foremost, peace can only occur in South Sudan when the warring factions come to the recognition that neither is strong enough to prevail against the other,” he said.

“Until that realization occurs and the will to move toward a resolution is there among the leadership of South Sudan, there is very little the international community can do with the resources available to it beyond mitigating some of the excesses and perhaps minimizing the amount of human suffering in South Sudan,” he added.

Q: What can be done to put peace back on track in South Sudan?

Pham: First and foremost, peace can only occur in South Sudan when the warring factions come to the recognition that neither is strong enough to prevail against the other. So the option of simply eliminating your opponent does not exist and you must, therefore, engage with your opponent to arrive at some mutually acceptable outcome that enables you both to have a stake and, more importantly, for the people of the world’s youngest country to have a chance at just basic survival.

Until that realization occurs and the will to move toward a resolution is there among the leadership of South Sudan, there is very little the international community can do with the resources available to it beyond mitigating some of the excesses and perhaps minimizing the amount of human suffering in South Sudan.

Q: Is the peace agreement that was reached—and reluctantly signed by Salva Kiir and Riek Machar—the answer?

President Salva Kiir has taken it upon himself to appoint a member of Vice President Riek Machar’s ethnic group, the Nuer, Taban Deng as vice president. But some of the most influential chiefs of the Nuer have come out and declared the move illegal and that he is not an acceptable representative of their people. So they have a figurehead who has been very publicly repudiated by the traditional leadership of the very ethnic group that he is supposedly representing.

I question whether there is a will to make peace at all. Very early in the fighting, the forces loyal to Salva Kiir bombed Riek Machar’s house. It is rather duplicitous to argue that Riek Machar ran away from his job and therefore had to be replaced when you blew up his house. On the other hand, I will not offer any apologies for Riek Machar. Both men have been obstructionists.

Peace agreements work when there is a will for peace or at least a recognition of reality. That has not yet occurred in South Sudan. As a result of this failure to grasp reality on the part of not just Salva Kiir and Riek Machar, but really the political elites of South Sudan, the people are paying the price.

Q: The Security Council has approved a resolution to send 4,000 additional peacekeepers to Juba. Why is the idea of a 4,000-person Regional Protection Force controversial?

Pham: It is controversial for different reasons. For some, it is because Salva Kiir has come out against it as an assault on South Sudan’s sovereignty. For others, it is a question of whether these 4,000 troops can be effective or whether the UN is setting itself up for failure. Then, of course, there is the controversy about the 12,000 troops that are already there and what they have done or not done.

Not to exculpate the UN force in South Sudan, because there are certainly some very serious allegations about their non-action during an assault on aid workers, one has to look at the size of the force that the UN has authorized. Peace keepers are a positive force when there is a will for peace. When there is no peace to keep the utility of peacekeepers is relatively limited.

You have 12,000 troops to secure an area the size of Texas. The numbers aren’t adequate. And when they are drawn from as many nations as they are that further complicates things. So while I am not excusing the rather dismal record of UN peacekeeping in South Sudan, one is better off blaming those who sent such an inadequate force for the task given to them. The additional 4,000, while it is helpful that they have this more robust mandate, the question is when will they mobilize, how will they be equipped, and will there be the political will to back them up?

Q: To what extent is the job of the peacekeepers complicated by the fact that the host government doesn’t really want them there?

Pham: This is the conundrum that the Security Council visit—a nice flag-waving exercise—finds itself in. I don’t think this is a resolvable tension. On one hand, there is the goal that the UN wants to avoid further bloodshed and conflict in South Sudan. That is probably a key priority objective of the United States and some of its European partners on the Security Council. On the other hand, there is the concern of other members of the Security Council, especially Russia and China, about South Sudan’s sovereignty. I am not sure the tension between ending the conflict and the sovereignty question can be easily resolved. So in many respects the UN Security Council shows up in South Sudan divided and delivering mixed messages. While it is helpful that members of the Security Council—specifically the diplomats—see things firsthand, absent the political will and the political vision, what is it going to accomplish?

Pham: It is a very complicated question. Although the first impulse of any country, and the American people are very good at this, is always responding to need, that is a good impulse, but there are times when the delivery of aid or the freedom to do so is itself tipping the hands on the scale, or in some cases enabling conflict. It is a very tough decision and it is one the United States will have to deliberate very carefully over.

In the 1990s, Médecins Sans Frontières (MSF) made what was a very controversial, but I think telling, decision. In the refugee camps in the eastern part of what was then Zaire, now the Democratic Republic of the Congo, where a large part of the Hutu population as well as the genocidaire, who carried out the Rwandan genocide, had fled [MSF] had to make the decision that continuing to pump aid into those camps actually enable the control of those who were guilty of the genocide and would perpetuate the conflict. MSF took the controversial decision almost twenty-five years ago to pull out their assistance even though it would hurt some people in the short term, but it would defuse, as vindicated by history, a long-term source of continuing conflict. I am not saying the situation [in South Sudan] is analogous, but that is an example of how what may seem to be a counterintuitive decision may in fact have some basis. It is certainly something that has to be examined very carefully and very deliberatively.