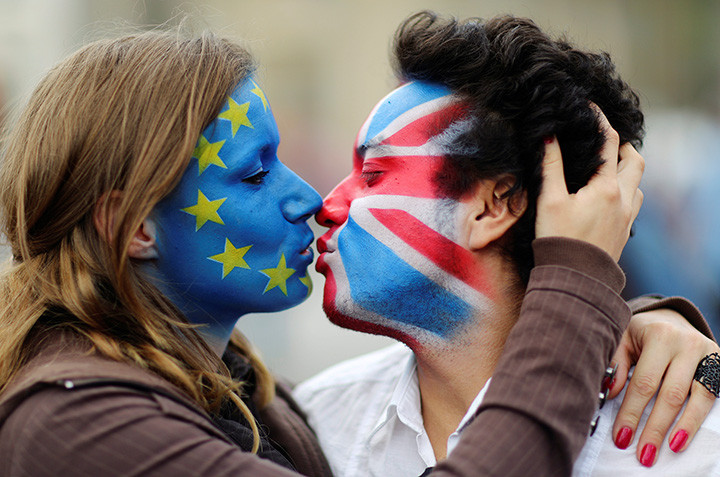 Here’s what Atlantic Council analysts and guests had to say about the British referendum on June 23 to leave the European Union.

In the Week After the Vote:


“British support for taking the United Kingdom out of the European Union came as a tremendous shock to the world. Global financial markets were roiled for two days after the June 23 referendum. A few days later, however, questions have been raised about whether the UK would actually leave the European Union. It now appears increasingly likely that a so-called Brexit will not happen,” writes Anders Åslund, a senior fellow at the Atlantic Council.

Read more: Why a Brexit May Not Happen.

In light of the British decision to leave the European Union, US President Barack Obama and his successor must forge a closer bond with Germany and shore up the “special relationship” with the United Kingdom, said R. Nicholas Burns, an Atlantic Council board director who served as under secretary of state for political affairs in the George W. Bush administration.

“After the Greek bailout strained the concept of a monetary union, the ongoing migration crisis weakened the concept of open internal borders, and the Brexit vote now shows that EU membership itself is fungible, the need for EU solidarity in the energy sector is more important than ever,” writes Thomas Cunningham, deputy director of the Atlantic Council’s Global Energy Center.

“A vote for Brexit is a big win for Russia’s foreign policy.  Moscow has made no secret of its desire to upend the post-Cold War settlement in Europe,” writes John E. Herbst, director for the Atlantic Council’s Dinu Patriciu Eurasia Center.

Read more: Brexit is a Win for Putin.

“Of the many things that the British decision to leave the European Union has been called—earthquake, inflection point, game-changer, disaster—perhaps the most important is wake up call. If June 23 does not raise European leaders from their collective slumber, then hope is lost for this European project of ours,” writes Ana Palacio, a former foreign minister of Spain.

“There are a lot of uncertainties related to Brexit and we will have to wait and see the clearer picture. But for now and for the immediate future, the UK is a member of the EU and we will negotiate [the Transatlantic Trade and Investment Partnership (TTIP)] on behalf of all the twenty-eight members. TTIP will survive Brexit,” Cecilia Malmström, the European commissioner for trade, said at an event hosted by the Atlantic Council’s Global Business and Economics Program in Washington on June 29.

“Amid the global political and economic turmoil in the wake of last week’s narrow decision by British voters in favor of taking their country out of the European Union, there has been no shortage of alarm about the potential toll of “Brexit” on Africa in terms of diminished trade, investment, and assistance. While there will undoubtedly be a significant negative impact in the short-to-medium term, over the long run, the news may not be all bad from the African perspective,” writes J. Peter Pham, director of the Atlantic Council’s Africa Center.

Read more: Africa and Brexit: Not All Bad News.

“For Ukrainians, the British vote is difficult to understand. They have fought and are still fighting for their “European choice.” Initially in a revolution, then in a highly intense hybrid war, and now in low-intensity warfare, they are defending their right to freely associate with and eventually join the EU,” writes Andreas Umland, a senior research fellow at the Institute for Euro-Atlantic Cooperation at Kyiv.

“I’m not worried [about Brexit]. I’m scared,” said Arseniy Yatsenyuk at the Atlantic Council on June 30. In one of his first public appearances in Washington since stepping down as Ukraine’s prime minister on April 14, Yatsenyuk urged Europe to get its act together. Brexit, he said, is a “huge geopolitical crisis”: the United Kingdom’s exit from the EU could split the union, weaken Europe, trigger a domino effect, and undermine trust and confidence in the European idea among Ukrainians. “We need a united Europe,” he said.

In the Week of the Vote:

“David Cameron will go down as one of the most foolish prime ministers in British history. By placating populist sentiment and agreeing to hold a referendum on the United Kingdom’s membership in the European Union to manage tensions in his own Conservative Party, he has taken his country out of relevant international politics, forced himself out of a job, and perhaps permanently divided the Conservatives,” writes Anders Åslund, a resident senior fellow at the Atlantic Council’s Dinu Patriciu Eurasia Center.

“The British referendum has not turned out to be the final word. In both the United Kingdom and the EU, leaders are now pausing to consider their options. There is an unlikely, but possible, road toward reconciliation. But that reconciliation could come at a high cost, by encouraging other special deals and an erosion of the EU’s remaining coherence. Now is not the time for drift. If the EU is to reconnect with its citizens, it needs to be clear about its ambitions and vision. As European Council President Donald Tusk remarked June 24, ‘What doesn’t kill us makes us stronger,’” writes Fran Burwell, vice president, European Union and Special Initiatives, at the Atlantic Council.

Read more: In Post-Brexit Era, a New Vision for the EU is Necessary.

“In reality, the democratic deficit in the EU is not as much as it is often claimed. But in terms of perception, there is a very real sense that there is not adequate democracy in the EU. Correcting this perception and encouraging citizens to engage with the EU is one of the big challenges facing the Union in the future,” said Fran Burwell, vice president, European Union and Special Initiatives, at the Atlantic Council.

“It is clear that the European Union needs a huge transformation, and it especially needs a group of leaders that gives it a new direction,” said Andrea Montanino, director of the Global Business and Economics Program at the Atlantic Council.

“Brussels needs to address specific problems like its fiscal and monetary policies, whether austerity makes the most sense in certain countries, and how the migration issues will be addressed. One way or the other, the EU has to gain the confidence of the populace,” said Richard L. Morningstar, founding director and chairman of the Atlantic Council’s Global Energy Center and a former US ambassador to the European Union.

Read more: Post-Brexit, Germany ‘Has to be Very Careful.’

“The United Kingdom will emerge as the biggest loser from its voters’ decision to exit the European Union. The United States loses a useful ally in its dealings with the European bloc, but it has others. France and Russia benefit, while Germany under Chancellor Angela Merkel will look increasingly vulnerable. Italy, Poland, and Spain have the opportunity to increase their influence within the EU, but are unlikely to seize it in the short term,” writes Ben Nimmo, information defense fellow with the Atlantic Council’s Digital Forensic Research Lab.

“Europe and the United Kingdom are now in uncharted waters. The separation negotiations that lie ahead will be fraught. With French and German elections approaching, a concerted desire in Brussels to make the United Kingdom a cautionary example for other would-be exiters, and a significant amount of bad blood, a deal will not come easily,” said Ana Palacio, a former foreign minister of Spain.

“[T]he biggest loser is Cameron; and British politics can be ruthless with losers. When Cameron promised a referendum in 2012, it was to settle a dispute within his own Conservative Party. He gambled, and lost; he campaigned, and lost. He has little or no credibility and may, as this writer fears, go down in history as the man whose decisions not only led to Brexit but to the breakup of the UK itself,” writes John M. Roberts, a nonresident senior fellow at the Atlantic Council’s Dinu Patriciu Eurasia Center and Global Energy Center.

A vote by the British to leave the European Union should not be viewed as an isolated incident. It should, instead, set off alarm bells about the future of the European project.

Peter Westmacott, a former British ambassador to the United States, described the outcome of the so-called Brexit referendum on June 23 as an “earthquake.”

Image: Two activists with the EU flag and Union Jack painted on their faces kiss in front of the Brandenburg Gate to protest against the British exit from the European Union, in Berlin, Germany, on June 19. British voters on June 23 voted in favor of the United Kingdom leaving the EU. (Reuters/Hannibal Hanschke)