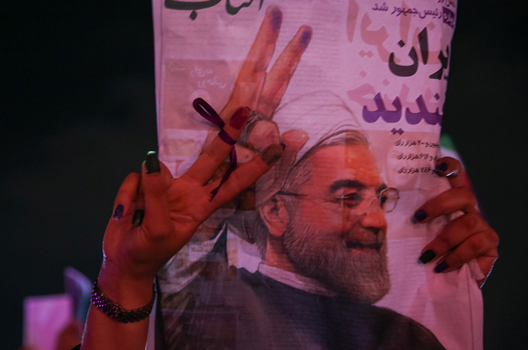 Washington’s increased pressure on Tehran and a diplomatic crisis in the Middle East have created an “incredibly unpredictable” political playing field between two longstanding adversaries, according to a regional analyst.

“You can posit an array of catastrophic scenarios given the pace and intensity of frictions… between Iran, the United States, and other players,” said Suzanne Maloney, deputy director of foreign policy at the Brookings Institution. “The prospects of moving quickly up an escalatory ladder between the United States and Iran is extremely high.”

According to Amir Handjani, an Atlantic Council board member and senior fellow with the Council’s South Asia Center, recent events in the Middle East have further contributed to Washington and Tehran’s “very dangerous” perception of each other as destabilizing forces in the region.

Maloney and Handjani joined Reza Marashi, research director at the National Iranian American Council, for a discussion on the future of the JCPOA and its role in US-Iran relations are part of a conference hosted by the Atlantic Council’s South Asia Center on June 13. Ladane Nasseri, senior Iran correspondent with Bloomberg, moderated the event.

On June 5, Saudi Arabia, Bahrain, the United Arab Emirates, and Egypt effectively isolated Qatar, accusing it of supporting not only militant groups, but Iran. Qatar has denied these claims.

In addition, a terror attack in Tehran on June 7, claimed by the Islamic State of Iraq and al-Sham (ISIS), marks the first such attack on Iranian soil. Handjani described how this attack has allowed the leadership of Tehran to propagate the narrative that it is Iran’s regional neighbors, supported by the United States, that allowed this attack to happen. Iranian Supreme Leader Ayatollah Ali Khamenei accused the United States of causing instability in the region, saying there will be no normalization of ties between the two countries.

“What we’re seeing is a full-fledged shift toward confrontation,” said Maloney. Handjani echoed her concerns, saying irreconcilable differences between the United States and Iran “puts us on a path to war.” If each nation responds to the other in kind, he said, the situation will get worse.

“The more prudent course,” said Handjani, “is looking for ways to deescalate and possibly [find] things that [the United States and Iran] can work together on,” adding: “That was what happened with the JCPOA.” The Joint Comprehensive Plan of Action (JCPOA) was a landmark agreement signed between Iran and six other nations to regulate the Islamic Republic’s nuclear activity.

However, while in the foundation of US Iran policy “the deal remains significant,” Maloney said: “US policy is no longer JCPOA-centric about Iran.” She added that “this betrays a significant shift in the way that Washington perceives the problems that we face.”

While the administration of former US President Barack Obama negotiated the landmark nuclear deal, Trump has been outspoken in his criticism of its stipulations, calling for a “better deal.” In April, the White House commissioned a review of the deal, and concluded that Iran has kept to the regulations. However, said Maloney, among all members of the Cabinet “there is a determination to turn up the heat on Iran.”

On June 15, the US Senate is projected to vote on the Iran sanctions package, with expected bipartisan support. Iran says these sanctions violate the terms of the JCPOA.

In introductory remarks, Stuart E. Eizenstat, deputy secretary of the Treasury in the Clinton administration and a former US ambassador to the European Union, said: “In dealing with Iran, there needs to be a mixture of sanctions and incentives. Either one separately doesn’t work.”

Nasseri described how the re-election of Iranian President Hassan Rouhani in May constituted a statement from the Iranian electorate that they would prefer to see a continuation of the nuclear deal, negotiated in Rouhani’s first term, on the premise of continued international engagement for Iran. While re-election gave Rouhani a public mandate to continue his work toward preserving the nuclear deal, Khamenei’s enmity toward Washington, used as a rallying cry for fellow hardliners, will rob Rouhani of political support, said Maloney.  According to Eizenstat, “it’s very important to bolster the Rouhani regime against those who never liked the JCPOA and will look for ways to back out of it.”

While the Trump administration’s review of the deal was a concerted effort to find ways to improve upon the deal and better enforce its strictures, Maloney said, “there is a fundamental perception shared at high levels in the administration that we can’t fix the problem of Iran with this carrot-and-stick approach.” Ultimately, according to Maloney, “what we need Is not a constructive change in some areas of behavior, but we need a fundamental change in the nature of the regime.”

She said that the notion of a US-imposed regime change in Iran is not a serious policy as yet, “but I don’t think it’s off the table.”

With Trump’s Iran policy as yet undefined, “the EU has an even more important role to play,” said Eizenstat. On June 13, European Union (EU) foreign policy chief, Federica Mogherini, expressed her confidence that the United States will maintain the nuclear deal, despite Trump’s rhetoric. She added that even if the United States walks away, the EU will not.

“If they see that the United States is hell-bent on destabilizing Iran…. I think you could see Europe unified [against] that position and you could have Russia and China join them,” said Handjani.

Ultimately, “the JCPOA is serving our [US] interests now, and as long as the parties continue to adhere, it’s a strong basis” for further negotiations, Thomas Pickering, a former under secretary of state for political affairs, said in a later panel. Eizenstat advised that the administration not take the JCPOA as a standalone agreement, but “build on that by finding ways to encourage [Iran] to join the nuclear technology regime.”

On the basis of the existing agreement, the EU has met with Iran to discuss the advancement of nuclear safety in the country, said Kelsey Davenport, director of the Nonproliferation Program at the Arms Control Association, who joined Pickering in a panel discussion. “This is a very positive development,” she added.

Since the passing of the deal, “Iran has not taken a lot of steps that responsible civil nuclear stakeholders at the state level are expected to take,” she said. This reality has contributed to Trump’s criticism of the agreement. “There’s more that can be done,” according to Davenport.

She recommended steps such as deepening Iran’s involvement in and cooperation with multilateral organizations, namely the International Atomic Energy Agency (IAEA) and the Global Initiative to Combat Nuclear Terrorism. Tehran’s positive engagement with these groups would be a “demonstration that Iran is committed to a safe program… and that it’s willing to work with other states in the region and international community to achieve these goals.”

Despite the rhetoric from both governments, Pickering is confident that the relationship between the United States and Iran can improve, and cautioned against the idea of regime change. “It’s time for real thinking,” he said.

Image: A supporter of Iranian president Hassan Rouhani holds his poster as she celebrates his victory in the presidential election, in Tehran, Iran, May 20, 2017. (TIMA via REUTERS)