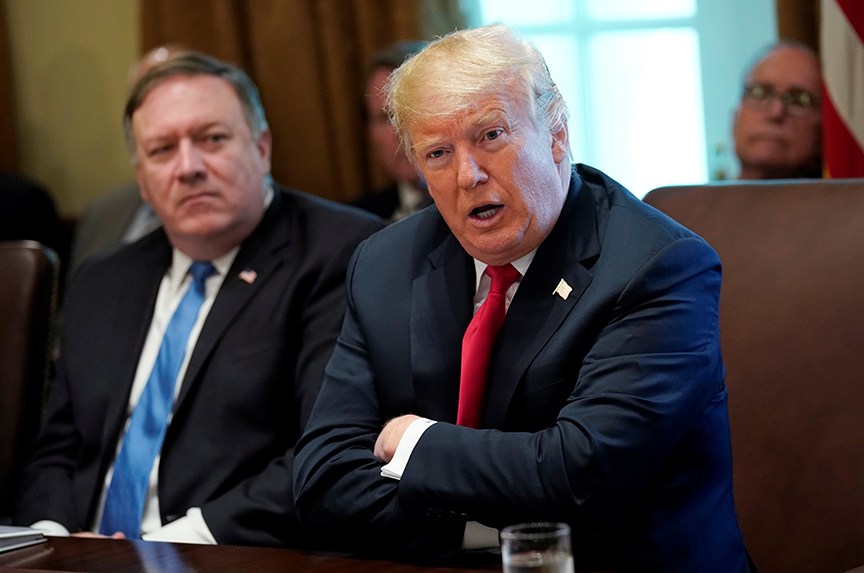 US President Donald J. Trump on August 24 abruptly cancelled Secretary of State Michael Pompeo’s planned trip to North Korea. Explaining his decision in a tweet, Trump wrote: “because I feel we are not making sufficient progress with respect to the denuclearization of the Korean Peninsula.”

Days later, on August 28, Nikki Haley, the US ambassador to the United Nations, said it appeared the North Koreans were having second thoughts about denuclearization.

Following his June 12 summit with North Korean leader Kim Jong-un, Trump boasted that he had removed the North Korean nuclear threat. So, what happened?

“It may seem to some casual observers that the Donald Trump-Kim Jong-un Singapore agreement is unraveling, but this is an illusion,” said Jamie Metzl, a nonresident senior fellow with the Atlantic Council’s Scowcroft Center for Strategy and Security.

“There was never any meaningful agreement to begin with,” said Metzl. “At no point did the North Koreans commit themselves to getting rid of their nuclear weapons in any meaningful way. This should have been obvious at the time.”

In fact, the Trump administration and Kim appear to have strikingly different views of denuclearization. On April 27, Kim and South Korean President Moon Jae-in signed the Panmunjom Declaration in which they stated their commitment to “realizing, through complete denuclearization, a nuclear-free Korean Peninsula.” This position was restated in the joint declaration Kim signed with Trump in Singapore. At no time was there any mention of denuclearization being verifiable—a US demand—or pertaining exclusively to North Korea.

Speaking at a national security conference on August 28, Haley suggested that the North Korean regime may be having second thoughts about denuclearization. “Look, are they wishing or maybe changing their mind on denuclearization?  It’s possible,” Haley said. “This is going to be a tough process, but this is still going in the right direction.”

Rosenblum is not convinced that North Korea is having second thoughts about denuclearization primarily because “it has never shown a willingness to forgo its nuclear and long-range missile arsenal in the first place.”

Despite the setbacks, we are nowhere near the “fire and fury” rhetoric between Trump and North Korea that stoked fears of an imminent war last summer. The US president derisively referred to Kim as “little Rocket Man,” while the North Korean leader called Trump a “mentally deranged US dotard.” Trump then evoked the specter of a nuclear war when he taunted the North Korean leader on the size of his nuclear button claiming that his is “much bigger” and “more powerful.”

Next came the historic summit between the leaders of the two Koreas for which Kim walked across into South Korea becoming the first North Korea leader to set foot in South Korea since the end of the Korean War in 1953.

This was followed by the Trump-Kim summit—a meeting that the US president hailed as an unmitigated success.

“The [Singapore] summit was a success in that it reversed the fusillade of insults by tweet between the leaders of North Korea and the United States. It also was useful to test the idea of breakthrough by going to the top,” said Rosenblum. “Beyond that, the summit set us back.”

The summit set the United States back, Rosenblum explained, because: “It granted legitimacy to Kim Jong-un without any assurance of gain. It lowered minimum standards for denuclearization and peace agreed to several times in older declarations. It led to an unnecessary concession to the North on US-ROK joint military exercises. It harmed our unity of effort with South Korea and benefitted China.”

“All this was done with zero tangible progress on hard security requirements,” he added.

The Washington Post reported that a sharply worded letter from Kim’s deputy—Kim Yong-chol—vice chairman of North Korea’s ruling Workers’ Party Central Committee and a former spy chief who met Trump at the White House on June 1, prompted the US president to scrap Pompeo’s travel plans.

“Confrontation is a tactic toward a strategic aim, just as is strategic patience,” said Rosenblum. He does not believe US war planners ever revised their assumptions about North Korean intent and capabilities following the Singapore Summit.

Most analysts—Rosenblum included—believe that despite the recent diplomatic setbacks, Pyongyang is unlikely to provoke a confrontation with the United States.

“The DPRK continues to make gains and reap rewards post-Singapore. Generating a crisis now on its end would jeopardize those the flow of those gains,” said Rosenblum. North Korea is formally known as the Democratic People’s Republic of Korea (DPRK).

On the other hand, “the United States could reintroduce confrontation by resuming military exercises or walking away from the negotiating table,” said Rosenblum, adding: “Doing so may be the right thing now, but would be our walking into a self-imposed trap that makes us look like aggressors.”

US Defense Secretary James Mattis on August 28 said that the United States could restart joint military exercises with South Korea that Trump—much to the surprise of everyone, particularly Seoul—suspended following his summit with Kim. Trump has described the military exercises as “provocative.”

The Singapore Summit gave the North Koreans something they had craved for generations: a meeting with a sitting US president. The United States, it appears, got less in return.

“Even at the time of the Singapore Summit, it was painfully clear that Donald Trump was trading decades of US influence for a one-week media hit that had almost no chance of leading to North Korean denuclearization,” said Metzl. “The even greater danger now is that Donald Trump may be inspired to increase hostility levels with North Korea to counteract his growing political and legal problems at home.”

Ahead of the summit there were apprehensions about US preparedness.

“Perhaps the most important lesson learned is the need to hold pre-summit talks that define goals and a plan for how to move forward afterwards,” said Rosenblum.

Regardless of the apparent setbacks, US officials have put on an optimistic face. On August 28, State Department spokesperson Heather Nauert read a statement from Pompeo suggesting the Trump administration remains committed to diplomacy.

“Despite the decision to delay my trip to Pyongyang, America stands ready to engage when it is clear that Chairman Kim stands ready to deliver on the commitments that he made at the Singapore summit to President Trump to completely denuclearize North Korea,” Pompeo wrote. “The United States, like the rest of the world, is looking forward to North Korea’s compliance” with denuclearization.

Image: US President Donald J. Trump (right) on August 24 cancelled US Secretary of State Michael Pompeo’s (left) plans to visit North Korea. Trump said he took the decision because the North Koreans had not made sufficient progress on denuclearization. (Reuters/Kevin Lamarque)