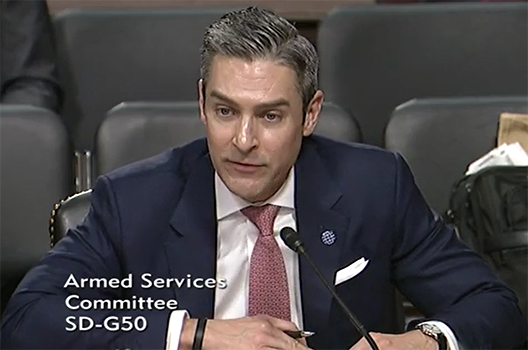 As growing aggression from Russia and China becomes “the main geopolitical challenge of the 21st century,” Wilson said, “the United States is much better positioned if it does not assume the burden of countering Beijing and Moscow alone.”

While differences between Washington and its allies on issues such as trade and the Iran nuclear deal make the United States “look vulnerable to our adversaries,” Wilson said, “the United States and its allies are more strategically aligned in grand strategy—enjoying the support of Republicans and Democrats—than they have been since 9/11, if not 1989.”

Washington and its allies now uniformly agree that “the great challenge of the 21st century will be the competition between the free world and authoritarian corrupt state-led capitalism, chief among them China and Russia,” according to Wilson.

This view, enshrined in the Trump administration’s latest National Defense Strategy and largely accepted by both political parties, necessitates that the United States leverage its network of alliances “as a strategic comparative advantage over our adversaries.”

For Russia specifically, “there is no possible successful strategy to confront [Russian President Vladimir] Putin’s aggression without a strong NATO,” Wilson said. At a time in which much attention has been paid to whether or not NATO allies are adequately paying the costs for the Alliance’s defense, the United States must avoid openly questioning the value of the Alliance, he argued. “The public questioning of our commitment to the Alliance is dangerous and only weakens our position.”

Asked by Sen. Jack Reed (D-RI) about the growing military threat from Russia, Wilson explained that the biggest contribution to continued Russian military aggression has been Moscow’s “calculation about what they can get away with.” In order to adequately deter Russia from taking further steps against its neighbors, including NATO allies in Europe, the United States must have “absolute clarity that there is firm resolve about Article V” commitments to common defense.

Wilson also noted that the Alliance has achieved significant progress in the last year “bolstering the Alliance’s rapid reaction capabilities and hybrid warfare defense and promising to extend the Alliance’s reach into the southern Balkans through further enlargement.” He explained that allies have heard US complaints about burden sharing, spending an additional $41 billion on defense since 2016 and promising to spend $100 billion more by 2020 and $350 billion additionally by 2024.

This week, NATO Secretary General Jens Stoltenberg gave credit to US President Donald J. Trump for allies increasing their defense spending. “We agreed to do more to step up—and now we see the results. By the end of next year, NATO allies will add $100 billion extra toward defense,” Stoltenberg said in an interview on Fox News Sunday. “So we see some real money and some real results. And we see that the clear message from President Donald Trump is having an impact.”

Trump acknowledged Stoltenberg’s comments in a tweet, declaring: “Jens Stoltenberg, NATO Secretary General, just stated that because of me NATO has been able to raise far more money than ever before from its members after many years of decline. It’s called burden sharing. Also, more united.”

But the United States needs to remember that “NATO is for our interest,” Wilson argued, noting that the only time NATO’s mutual defense clause was activated was in the aftermath of the 9/11 terrorist attacks.

On the threat posed by China, Wilson said this must also be met with a united front with US allies, not just in Asia, but also in Europe where “China is becoming a greater geopolitical reality as it comes closer via cyberspace, trade and investment, and now military presence close to Europe’s shores. The United States should confront any Chinese challenge with Europe as well as our Asian allies by our side.”

Wilson conceded that while the disagreements between the United States and its allies, such as trade disputes and differences on policy toward Iran, “are real,” the need to confront Russia and China “should inevitably drive Washington to bolster and expand its alliances in the coming years.” The United States, Wilson argued, should avoid “unnecessary division [that] plays into the hands of Washington’s geopolitical competitors.”

Rather than putting economic or other diplomatic issues before the strength of its network of friends, the United States, Wilson maintained, should “put our alliances at the core, not the periphery, of our strategy.”