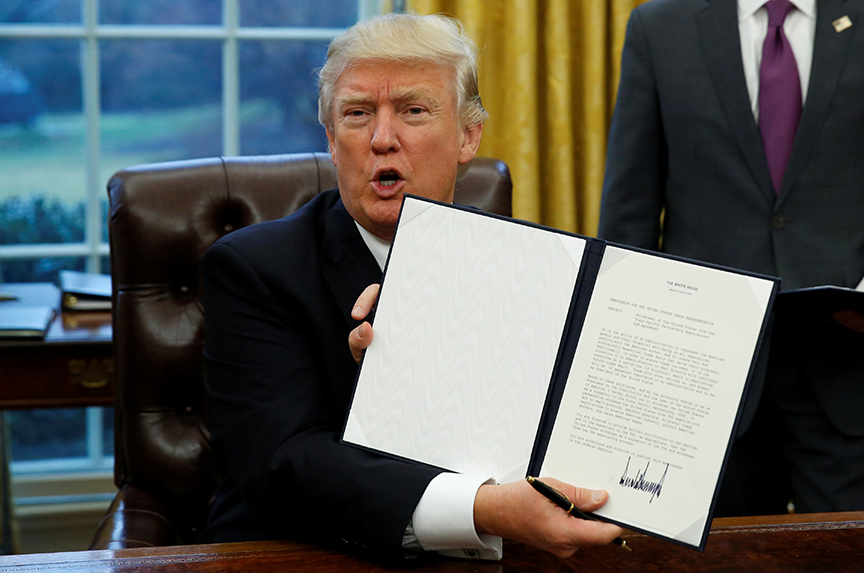 US President Donald Trump’s decision to take the United States out of a free-trade agreement with eleven other Pacific Rim nations is a “gift” for China because it undermines a deal through which the United States had sought to write the rules of the road for global trade, according to two Atlantic Council analysts.

On January 23, Trump abandoned the Trans-Pacific Partnership (TPP), a signature agreement of his predecessor Barack Obama. The decision was not surprising. On the campaign trail, Trump had provided plenty of clues as to his dislike for the TPP. Following his election on November 8, he put out a video in which he implicitly stated his intention to withdraw the United States from the TPP “from day one” of his term as president. Describing the agreement as “a potential disaster for our country,” he said, he would “negotiate fair bilateral trade deals that bring jobs and industry back.”

The TPP was the United States’ opportunity to be in the driver’s seat when it comes to writing the rules of global trade. Beside the United States, the TPP includes Canada, Mexico, Peru, Chile, Japan, Vietnam, Brunei, Malaysia, Singapore, Australia, and New Zealand. These countries together make up 40 percent of the global GDP.

China has its own Asia-wide trade pact—the ten-nation Regional Comprehensive Economic Partnership (RCEP), to which it remains committed.

“Everybody in the region was lining up to join TPP,” Manning said, noting that even China, while initially skeptical of the agreement because it viewed it as a US containment strategy, had changed its mind in favor of the deal.

“We are now letting China define the rules and are going to regret that for a long time,” he contended.

Jason Marczak, director of the Latin America Economic Growth Initiative at the Atlantic Council’s Adrienne Arsht Latin America Center, noted that Trump’s embrace of an “America First” strategy has created an opportunity for China to solidify its global leadership role.

“With the United States looking more inward in the years ahead, this is a huge moment for China’s global ascent,” said Marczak. He noted, for example, that as the Trump administration prepares to take a backseat on fighting climate change, China has used the opportunity to step up to the plate.

A US withdrawal creates uncertainty about the TPP’s future.

“On the one hand, there are those who say the agreement is contingent upon US participation because of the access it would have provided to the US market,” said Marczak. On the other hand, some partner nations, including Australia, believe that a lot of progress has already been made in negotiations and “just because the United States is pulling out doesn’t mean that the agreement should fall apart,” he added.

Marczak predicted that the world will move on as the Trump administration adopts a more isolationist position. “If the United States doesn’t want to play, other countries will negotiate far-reaching regional deals and the United States will be left on the sidelines,” he said.

With the United States leaving the TPP, is there less incentive for its former negotiating partners to remain in the deal?

“The big prize in the agreement was not only the changes that Japan has pledged to make, but also the access to US markets,” said Marczak.

“A lot of the hard work has already been done so there is a lingering question of whether there is a way that certain countries might still want to move forward as part of a series of newly formulated deals,” he added.

However, Japanese Prime Minister Shinzo Abe offered an early indication of an answer to that question by warning that the TPP would be “meaningless” without the United States.

Manning said there may be a silver lining after all: a free-trade agreement between the United States and Japan. This should be relatively easy to achieve because most of the hard work has already been done over the course of the TPP negotiations, said Manning, adding that Japan has made important concessions in the negotiations that could become the foundation for a bilateral deal.

“Since the United States and Japan are 80 percent of the economy of TPP countries that would mitigate the damage” of a US withdrawal from the multilateral pact, said Manning.

Manning warned of the perils of underestimating Trump noting that a rejection of the TPP could lead to tariffs and, eventually, a trade war. “Trump is putting us on a trajectory back into the 1930s of beggar-thy-neighbor trade wars. I don’t see any benefit from that,” he said. “At best, he is creating enormous uncertainty in the markets. At worst, he is ripping up the entire system.”

“When you use the term ‘America First,’ the underlying assumption is that the entire post-World War II order that we have built was somehow not in America’s interests and that we have been played for suckers. I think that is fundamentally wrong,” Manning said.

Trump, he added, “has had these views for many, many years, and now he is in a position to act on them.”

Image: US President Donald Trump held up the executive order on withdrawing the United States from the Trans-Pacific Partnership trade agreement after signing it in the White House in Washington on January 23. (Reuters/Kevin Lamarque)