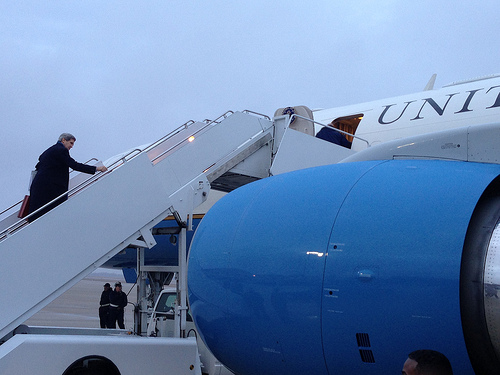 President Barack Obama and Secretary of State John Kerry have chosen wisely to visit the Middle East early in Mr. Obama’s second term, but when they go, will they have anything new to say? U.S. interests are at significant risk as the region continues to undergo profound changes and instability, and Arab and European allies are asking for greater U.S. engagement and leadership. The region also presents the United States with unanticipated opportunities, such as the development of Arab democracies and a reduction in Iranian influence. The challenge facing the United States is how to lead without dominating, and how to protect and promote U.S. interests without absolving other actors of responsibility. Thus, the task for this administration is to develop a strategy to match the President’s positive rhetoric with real follow-up in diplomacy, assistance, and security cooperation.

While many core U.S. interests in the region — access to energy, the security of Israel, WMD nonproliferation, counterterrorism — have endured for decades, the Middle East and North Africa of today present challenges and opportunities that are in some ways radically different from those of four years ago. Few imagined when President Obama began his first term that, by the end of it, no fewer than five Arab countries previously under authoritarian rule would embark on paths of profound change with the explicit goal of becoming democracies (Tunisia, Egypt, Libya, Yemen, and Iraq); that a sixth would experience internal struggles (Bahrain); and that a seventh (Syria) would be embroiled in a civil war in which tens of thousands would die.

The Arab uprisings have not only unseated rulers and brought new political actors, including Islamists, to power. They have also profoundly altered regional dynamics in ways that the United States has only begun to recognize. The resistance axis once led by Iran (which included Syria, Hezbollah, and Hamas) has unraveled, discredited by Iran’s support for a brutal Syrian regime, thus opening the possibility of greatly diminished Iranian influence. On the negative side, arms and mercenaries once controlled by Libyan leader Muammar el-Qaddafi are on the loose, and terrorist groups affiliated with al-Qaeda are exploiting a lawless atmosphere that threatens to destabilize North Africa and the Levant.

U.S. strategy for the Middle East in Mr. Obama’s second term should be organized around two strategic imperatives: containing new and old threats to U.S. interests, and embracing the opportunities inherent in the calls for dignity (citizenship, rights, and economic opportunity) that emerged in the Arab uprisings. Containing threats must focus first and foremost on preparing for the coming Middle East cold war with Iran, whose acquisition of a nuclear weapons capability is but a few years away. The United States should continue to work to prevent such an outcome, but unfortunately Iran’s use of North Korean negotiating tactics looks likely to succeed. As the consequences of a U.S. military campaign would be even more dangerous than facing a world with a nuclear Iran, the United States should work assiduously and expeditiously with its NATO and Gulf allies to develop a supporting military posture to contain a nuclear Iran until Iran’s own demographic trends change the hostile nature of the regime.

The United States also should do much more to enable a Syrian rebel victory, which would do more damage to Iran’s influence than almost any other set of actions. The United States has clear, strategic interests in Syria and the capability to make a difference, by channeling assistance to carefully chosen rebel groups, and using limited airpower to turn the tide in the rebels’ favor. The opportunity costs of continuing to watch and not act — for example, a post-Assad regime that is hostile to the United States — argue strongly for a greater U.S. leadership role.

The same can be said for dealing with new threats from al-Qaeda affiliates across the region, as the Mali conflict has demonstrated. To prevent the emergence of future safe havens for terrorist groups, the United States should work more closely with its regional and European allies to strengthen governance capacity in ungoverned areas.

The Arab awakening also provides enormous opportunities to advance US interests by embracing the dignity agenda. Although the United States will not determine the outcomes of these movements, there is much it can do to influence their paths. The United States could lead the international community, for example, in organizing assistance to Egypt conditioned on respect for human rights and inclusive democratic processes, as well as responsible foreign and economic policies. The United States could get ahead of the next wave of Arab revolutions by deepening relations across the region with those calling for constructive change, while also discriminating between actors with narrow, extremist plans and those who share the values of the dignity agenda.

Finally, as Secretary Kerry’s and President Obama’s itineraries demonstrate, it is time to get relations with Israel back on track, and renew practical options for peace with the Palestinians. Even if bilateral relations at the highest levels of the U.S.-Israeli relationship are not strong, Mr. Obama should seek to win the confidence of the Israeli people and persuade them that the United States remains committed to Israel’s security and that it is in Israel’s interest to pursue a two-state solution with the Palestinians while it is still possible.

To be successful, this broad strategy requires something new from the White House in this term: personal, presidential investment in building relationships with leaders of key allies and partners to counter the threats and harness the opportunities. Absent an active U.S. leadership role, we will suffer a more unstable and dangerous world in four years than we see today.