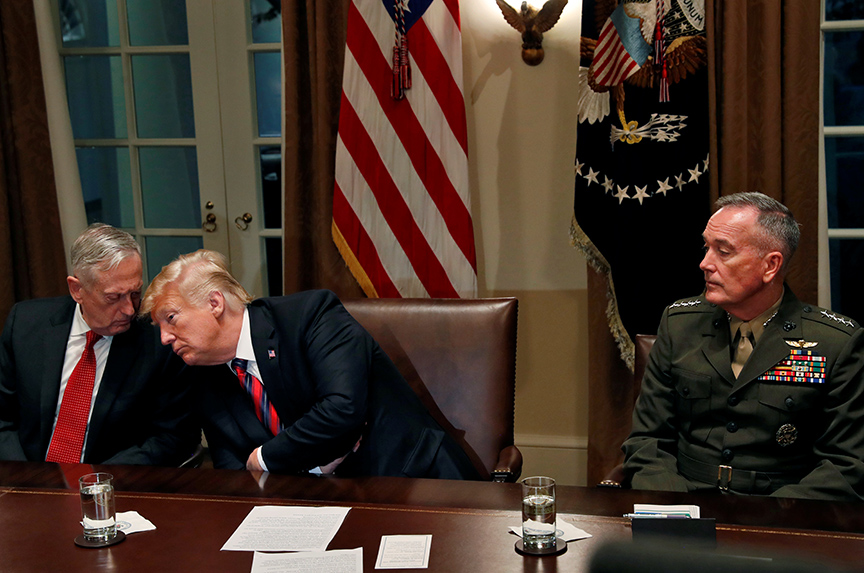 “The security and wellbeing of the United States are at greater risk today than at any time in decades. America’s military superiority… has eroded to a dangerous degree. America’s ability to defend its allies, its partners, and its own vital interests is increasingly in doubt. If the nation does not act promptly to remedy these circumstances, the consequences will be grave.”

The above warning is the opening of the National Defense Strategy Commission’s report, which was released on November 13. The Commission—of which I was a member—was established by the 2017 Defense Authorization Act to independently assess the state of the nation’s defense as well as to review the Department of Defense’s (DOD) January 2018 National Defense Strategy (NDS).

In our report, we note that many of the skills necessary to conduct military operations have atrophied and that the United States’ edge in technologies that underpin US military superiority is eroding or has disappeared. We add that these trends are undermining both our ability to deter adversaries and the confidence of US allies, increasing the likelihood of military conflict.

The report’s punchline is grim: “The US military could suffer unacceptably high causalities and the loss of major capital assets in its next conflict. It might struggle to win, or perhaps lose  [my emphasis], a war against China or Russia. The United States is particularly at risk of being overwhelmed should its military be forced to fight on two or more fronts simultaneously.”

Why are we in this situation? The Commission cites both developments abroad and at home. Abroad, China and Russia, seeking regional hegemony and global power projection, are pursuing military buildups aimed at neutralizing US strengths. The threats from Iran and North Korea have worsened as those countries have developed more advanced weapons and creatively employed asymmetric tactics. Around the world, the proliferation of advanced technology is allowing more actors to contest US military power in more threatening ways.

At home, the United States has significantly weakened its own defense due to political dysfunction and decisions made by both Republicans as well as Democrats. This has played out in the effects of the Budget Control Act (BCA) of 2011 and years of failing to enact timely appropriations. Defense spending was cut substantially under the BCA, with pronounced detrimental effects on the size, modernization, and readiness of the military.

What about DOD’s current strategy? The Commission believes DOD’s 2018 NDS represents a constructive first step in responding to this crisis. We found much to like, including the NDS’s assessment of the strategic environment, the priority it places on preparing for major-power competition and conflict, its emphasis on the enduring value of US alliances and partnerships, and its attention to issues of readiness and lethality. That said, we are concerned the NDS leaves unanswered critical questions regarding how the United States will meet the challenges of a more dangerous world. The NDS points in the right direction but does not explain how to get there.

On technology, we recommend the US government take steps to protect and strengthen the US national security innovation base by increasing investment in key industries and pursuing selective economic disintegration with rivals to avoid dangerous dependencies. DOD must also continue broadening its efforts to find and incorporate new capabilities developed by the private sector. Congress and DOD must also find new ways to enable more rapid maturation, acquisition, and fielding of leap-ahead technologies.

Another imperative is modernizing our nuclear force. Given the need for a robust deterrent, the aggressive nuclear modernization programs some rivals have been carrying out, and the increasing reliance of those rivals—particularly Russia—on escalatory doctrines that feature limited use of nuclear weapons, DOD must remain committed to the bipartisan nuclear modernization program outlined in the 2018 Nuclear Posture Review.

The Commission understands that all these efforts require resources. We assess unequivocally that the US defense strategy is not adequately resourced. The United States is near the point of strategic insolvency, where its “means” are badly out of alignment with its “ends.” There must be greater urgency and seriousness in funding national defense.

It was beyond the scope of our work to identify the exact dollar amount required to fully fund the military’s needs. But, in accordance with the 2017 testimony of US Secretary of Defense James Mattis and Chairman of the Joint Chiefs of Staff, Joseph Dunford, the Commission recommends that Congress increase the base defense budget at an average rate of three to five percent above inflation through the Future Years Defense Program and perhaps beyond. This is significantly above currently planned levels.

The last paragraph of the executive summary is as powerful as its first. “The costs of failing to meet America’s crisis of national defense… will not be measured in abstract concepts like ‘international stability’ and ‘global order.’ They will be measured in American lives, American treasure, and American security and prosperity lost. It will be a tragedy—of unforeseeable but perhaps tremendous magnitude—if the United States allows its national interests and national security to be compromised through an unwillingness or inability to make hard choices and necessary investments.”

If you care about national security, read this report. You can also listen to one of the co-chairs, Eric Edelman, talk about the report on my weekly podcast, Intelligence Matters.

Michael Morell is a former deputy director and acting director of the CIA.  He is an Atlantic Council board member.  Much of this essay is drawn directly from the executive summary of the report of the National Defense Strategy Commission, on which he served. Follow him on Twitter @MichaelJMorell.

Image: US President Donald J. Trump leans in to listen to US Defense Secretary James Mattis as Marine Gen. Joseph Dunford, chairman of the Joint Chiefs of Staff, looks on in the Cabinet Room at the White House in Washington on October 23. (Reuters/Leah Millis)