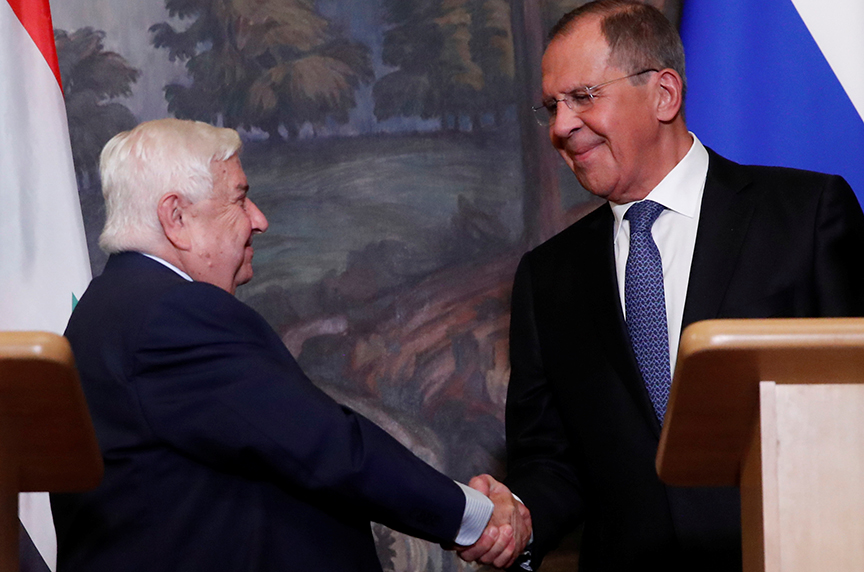 Syrian dictator Bashar al-Assad’s regime, backed by Russia, appears to be preparing for a major offensive on Idlib, the last major rebel stronghold located along Syria’s northwestern border with Turkey.

The population in Idlib has almost doubled to around three million as tens of thousands of Syrians trapped in other parts of the war-ravaged country were evacuated there under various ceasefire agreements with the Assad regime. An assault on Idlib would trigger an even greater humanitarian catastrophe as there are few safe spaces inside Syria to which civilians can be evacuated.

Here’s a look at the warning signs leading up to a possible offensive.

The Assad regime, emboldened by territorial gains across Syria, has openly raised the possibility of an assault on Idlib. Speaking alongside Russian Foreign Minister Sergey Lavrov in Moscow on August 30, Syrian Foreign Minister Walid al-Muallem said the regime was prepared to “go all the way” in Idlib.

Lavrov, too, signaled an all-out offensive against Idlib.

“It is unacceptable that those terrorists particularly al-Nusra Front are using the de-escalation area of Idlib to attack the Syrian army and to also attack through drones the Russian military bases in the area,” the Russian foreign minister said, referring to Hayat Tahrir al-Sham (HTS), an Islamist militant group formerly affiliated with al-Qaeda.

Lavrov said the “terrorists,” whom he accused of using civilians as human shields, must be wiped out in Idlib. He also called on the West not to “obstruct an anti-terror operation.”

“HTS, with its thousands of experienced and capable fighters and strong organization, is the dominant insurgent group in the Idlib area,” said Faysal Itani, a senior fellow with the Atlantic Council’s Rafik Hariri Center for the Middle East. “Its exact formal ties to the Al Qaeda core is the subject of debate, but its ideology is essentially Salafi-Jihadism adopted to the unique social, political, and military context of the Syrian conflict.”

Is the Assad regime using HTS as an excuse to target Idlib? “It is true that framing the offensive as a counterterrorism operation has public relations benefits for Assad and Russia, but in truth they both consider any armed opposition to the state to be terrorism and intend to take Idlib, by force if necessary, whatever the ideology of the dominant militias there,” said Itani.

Lavrov said the rebels were preparing to stage a chemical attack in Idlib in order to blame the regime and provoke a US military retaliation.

The Russian navy is expected to begin a major exercise in the Mediterranean on September 1 likely in preparation for an Assad regime assault on Idlib. These exercises are “aimed at deterring the West from carrying out strikes on Syrian government forces,” according to Reuters.

Kremlin spokesman Dmitry Peskov said the “hotbed of terrorists” in Idlib must be wiped out.

Itani said some analysts and policymakers in the West “insist Russia has inherited a quagmire in Syria, Russia wants out as soon as possible while Assad is the greedy one, [and] Russia is more open to compromise than Assad, etc.”

“It’s comforting to believe these things about your rival of course, but they are not true,” he said. “There is no gap between regime and Russian goals: the restoration of regime sovereignty over Syria. Idlib is no exception to this and has never been. Of course, it’s possible that Turkey and Russia and the regime will strike a deal and hand Idlib over to Assad without a fight, in which case Russian support becomes moot.”

Turkish President Recep Tayyip Erdogan is working with the Russians and Iranians to defuse the situation. Turkey, which abuts Idlib and already hosts 3.5 million refugees, has said it will not open its borders to accept more refugees.

Turkey is in an extremely difficult position in Syria in general, and Idlib in particular, said Itani.

“The growing PKK/PYD threat along its border facilitated by the US-Kurdish alliance has forced it to abandon its original anti-Assad goals and focus on containing Kurdish expansion,” said Itani referring to the Kurdish groups—the Kurdistan Workers’ Party (PKK) and the Democratic Union Party (PYD). “To do that it’s had to use military force in Syrian territory, which in turn requires Russian approval,” he said.

“Turkey has proxy militant assets in Idlib, but it can’t afford to stand in Russia’s way just to keep a patch of Syrian territory from falling into regime hands. It doesn’t have that luxury. At the same time, it knows that a regime offensive would displace refugees in Idlib, potentially into Turkey itself which the latter cannot afford. It’s best bet is to negotiate a regime takeover of Idlib with limited violence, and the transfer of refugees to Syrian territory held by Turkey elsewhere,” Itani explained.

Staffan de Mistura, the United Nations’ envoy to Syria, warned of “a perfect storm coming up in front of our eyes” if the Assad regime goes ahead with its threatened offensive on Idlib. He has called for humanitarian corridors to be set up to allow civilians to evacuate.

“I don’t think there’s an ‘if’ here—Idlib will fall,” said Itani. “In theory, civilians could go anywhere in Syria, or into Turkey. But I don’t think Assad will want them flowing into ‘cleansed’ regime territory.”

“Since Turkey already occupy substantial territory in Syria that I don’t believe it will give up soon, in areas adjacent to Idlib that include the Olive Branch and Euphrates shield territories. These areas are not well-placed to receive a huge influx of refugees, but that may matter less to Turkey (and the regime) than the need to keep them out of their respective core territories,” he added.