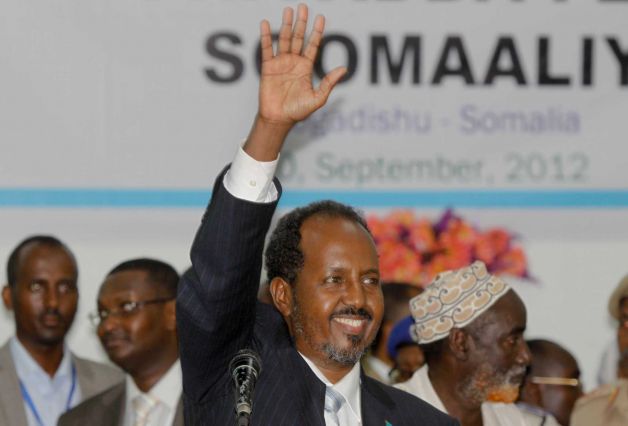 By all accounts, the 56-year-old new president is a very decent chap who is well regarded by many of those in the local and international nongovernmental organizations with whom he has worked the last two decades. And, after the corrupt and incompetent tenure of his predecessor, Sheikh Sharif Sheikh Ahmed, who delivered neither goods nor services to the longsuffering Somali people, the country could do far worse than have at the helm a man who helped found the Somali Institute of Management and Administration (SIMAD) which has trained some 1,500 students since 2001.

However, it would be a mistake to allow the excess enthusiasm that has affected many observers to obscure the difficult, if not overwhelming, realities that President Hassan faces.

First, the election result was not so much mandate for the new president as it was a repudiation of the outgoing one. A July report by the United Nations Monitoring Group for Somalia concluded that members of the “Transitional Federal Government” (TFG) that nominally held sway from 2009 until now embezzled three-quarters of the foreign aid they received while leaving it up to African Union peacekeepers to fight the al-Qaeda-linked Islamist militants of al-Shabaab and foreign governments and aid groups to feed the populace during the worst famine in decades. Even then, as Al-Jazeera alluded to in its report, what may have finally tipped the scales against Sharif Ahmed was not his terrible record as a leader so much as the fact that he apparently did not share the spoils well: he was reportedly given $7 million dollars from Gulf sources to buy his reelection and yet, until the desperate second round of the vote, doled out stingy payments in the $10,000-range to the 270 electors.

Second, the electors who picked the new president, notwithstanding the spin being put by United Nations and African Union officials, are hardly legitimate representatives of the Somali people, given the fraud and corruption—indeed, as The Economist reported last week, the outright sale of parliamentary seats for up to $25,000 a piece—which took place in the lead up to the convening of the legislature. The process of forming this latest interim “government” was vitiated almost from the start. In theory, a group of elders, representing the clans and sub-clans which are the permanent framework of Somali society, were supposed to pick a broadly representative constituent assembly. The constituent assembly, in turn, was supposed to prepare a permanent constitution and give way to a parliament, which would elect the president. In reality, warlords and political operators hijacked the process by advancing faux elders who represented no one but themselves.

Third, irrespective of how the new president got in office, the fact remains that it is a post that has symbolic value but is otherwise powerless. The Somali “government” is a government in name only and “Somalia” itself is only notionally a unitary state, given that Somaliland in the northwest effectively seceded years ago while large regions like Puntland in the northeast operate autonomously with little reference to the central government. Even within the limited confines of areas in and around Mogadishu which African Union force has cleared for his administration, the new president will be challenged by powerful interests, both old (the functionaries who have carved power bases for themselves in various donor-funded ministries and agencies) and new (people who spent tens of thousands of dollars last month to become parliamentarians will want to recover their investments). Moreover, because he comes from civil society and was elected in a protest vote, Hassan is weak in comparison to the real power brokers in Somalia, the militia leaders and businessmen who control the levers of power.

Fourth, although al-Shabaab has been significantly weakened over the course of the last year, it remains a threat. While media reports for weeks have been reporting an “imminent” assault by African Union forces on the port of Kismayo, the militants’ last major stronghold and the hub of their vast financial network, the offensive has not taken place. And, even if it were to succeed, its defeat as an insurgency may well have the unintended consequence of turning al-Shabaab, which earlier this year formally aligned itself with al-Qaeda, into the type of terrorist group that would bedevil not only any Somali government, but neighboring states as well. Unfortunately for President Hassan, given the paltry armed forces his new administration inherits—more of the soldiers trained for the TFG deserted than remain, while it was not unknown for officials to sell the military assistance received in bulk to the insurgents—his capacity to do much on the security front will be severely limited.

The international community should wish the new president well, but policymakers probably should not entertain unrealistic expectations about what he will be able to do given the hand he has been dealt.