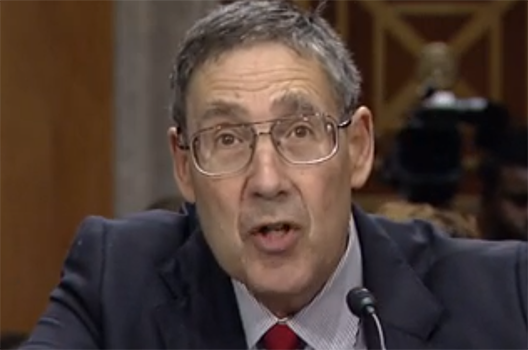 As Russia “seeks to weaken NATO, the European Union, and the United States,” the Western alliance of democracies must push back against Kremlin aggression “and the place to do it is Ukraine,” John Herbst, a former US ambassador to Ukraine and director of the Atlantic Council’s Eurasia Center, told US senators at a hearing in Washington on June 18.

Russia illegally annexed Crimea from Ukraine in early 2014 and has since supported separatists in eastern Ukraine. While “Western support for Ukraine has been substantial and essential,” Herbst testified to the US Senate Foreign Affairs Committee’s Subcommittee on Europe and Regional Security Cooperation, “it has not been as agile and effective as it could be.”

Ukraine’s military struggle against Russia deserves specific Western assistance, Herbst argued. “Kyiv has fought the world’s second-most powerful military to a standstill,” he explained, adding that “there are 2,500 Russian military officers leading the Kremlin war in Donbas and they have at their disposal over 450 tanks and 700 pieces of artillery.” While attention has faded from this frontline, Herbst reminded lawmakers that “there has not been a day of peace since Moscow’s aggression began in the spring of 2014.”

“Over 13,000 Ukrainians have died in this war,” he continued. “Moscow hopes that its constant pressure on Ukraine will force the government to stop building a democratic and open society oriented to the West. So far, the Kremlin is not succeeding.”

On June 18, the Pentagon announced it was giving $250 million worth of military aid and equipment—some of it lethal—to Ukraine’s armed forces. This new aid, which has been authorized by Congress, brings US support to Ukraine to $1.5 billion since 2014.

“The new funds will provide equipment to support ongoing training programs and operational needs, including capabilities to enhance: maritime situational awareness and operations as part of ongoing US efforts to increase support for Ukraine’s Navy and Naval Infantry; the defensive capacity and survivability of Ukraine’s Land and Special Operations Forces through the provision of sniper rifles, rocket-propelled grenade launchers, and counter-artillery radars; command and control; electronic warfare detection and secure communications; military mobility; night vision; and, military medical treatment,” the Pentagon said in a statement.

“This security cooperation is made possible by Ukraine’s continued progress on the adoption of key defense institutional reforms to align Ukraine’s national security architecture with Euro-Atlantic principles,” it added.

The Pentagon affirmed US commitment to help Ukraine “implement provisions of Ukraine’s 2018 Law on National Security to strengthen democratic civilian control of the military, promote command and control reforms, enhance transparency and accountability in acquisition and budgeting, and advance defense industry reforms.”

“These reforms will bolster Ukraine’s ability to defend its territorial integrity in support of a secure, prosperous, democratic, and free Ukraine,” it said.

Herbst explained that Russia has a significant weakness in its war in Ukraine because “the Russian people have clearly stated that they do not want Russian forces fighting in Ukraine… [This] means that [Russian President Vladimir] Putin must hide his casualties and keep them to a minimum.” It is vital therefore, Herbst argued, that the West help Ukrainian forces exact greater costs on the Russian armed forces for pushing into Ukrainian territory.

Herbst also argued that sanctions can be a very important tool for Western governments to turn the screws on Moscow as Russia’s “weak economy based on hydrocarbon exports… is susceptible to economic pressure.” He explained that “Western sanctions impose a real cost on the Russian economy” of as much as 1.5 percent of gross domestic product growth a year.

He pushed lawmakers, however, to make sanctions a more consistent part of US policy. After the Russian government introduced new shipping checks in 2018 in the Sea of Azov—this depressed shipping from Ukrainian ports there by as much as 50 percent—and then attacked and seized three Ukrainian vessels and two dozen sailors in the Strait of Kerch, sanctions from the US government “were late and weak.”

Herbst endorsed a new bill, the Defending American Security from Kremlin Aggression Act (DASKAA), which outlines new and potential sanctions against Russia should it continue to interfere in US elections, try to close of navigation to the Sea of Azov, or continue malicious cyber activities. Herbst said the bill “could be a vehicle for strengthening our sanctions policy.”

In addition to these sanctions, Herbst argued that the United States should do more to convince European allies, such as Germany, to abandon the planned Nord Stream 2 pipeline, which would transmit gas from Russia to Central Europe though the Baltic Sea. This pipeline would “allow the Kremlin to bypass Ukraine and exert geopolitical leverage over the nations of Eastern Europe,” Herbst said.

While he acknowledged that German Chancellor Angela Merkel has asked for Russian assurances that Moscow would continue to use the existing pipelines through Ukraine, he noted “numerous statements by Russian officials as high as Prime Minister [Dmitri] Medvedev have cast this problem into doubt.”

Herbst suggested that “Congress and the United States should consider sanctions on companies providing the high tech necessary to complete the project” in order to push for the cancellation of the pipeline.

New Western assistance to Ukraine is important, Herbst said, as Ukraine’s new president, Volodymyr Zelenskyy, settles into his new role. While Putin may have been pleased that former Ukrainian President Petro Poroshenko lost the election to Zelenskyy in April, the Kremlin has “been skeptical about [the] new President Zelenskyy” especially after the newcomer’s rejection of Putin’s offer to give Russian passports to Ukrainians.

“President Zelenskyy has two great battles to win, against Kremlin aggression and against domestic interests impending fundamental reform,” Herbst told lawmakers. “With assistance from the United States and the EU, he can win both battles. Congress should continue to do its part in providing that assistance.”