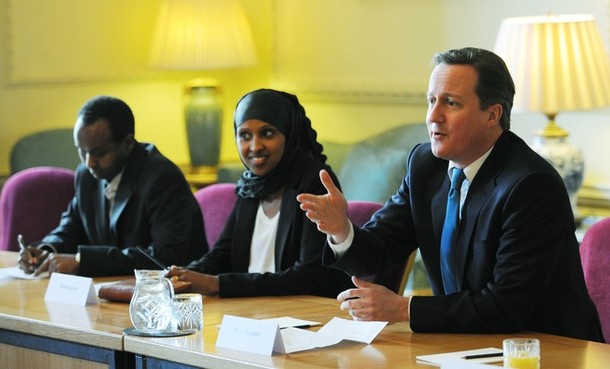 British Prime Minister David Cameron is hosting a major international conference tomorrow involving senior representatives of some forty countries and multilateral organizations. The agenda that the Foreign and Commonwealth Office has laid out for the conferees is ambitious, to say the least: the mandarins of Whitehall are giving themselves all of five hours to get  their guests to agree to no fewer than seven sets of practical measures, including sustainable funding for the African Union Mission in Somalia (AMISOM) and support for Somali security and justice sectors; a political accord about what should succeed the current Somali transitional institutions in August 2012 and the establishment of a Joint Financial Management Board for the new government; a coordinated international package of support to Somalia’s regions; renewed commitment to tackle collectively the terrorist threat emanating from Somalia; measures to take down the piracy business model; renewed commitment to tackling Somalia’s humanitarian crisis; and an agreement on improved international handling of Somalia issues.

These objectives are, of course, all well and fine. In fact, the international community has been hitherto quite negligent in its persistent failure to adequately address these and other concerns—which is why it is all the more a shame that the London Conference on Somalia is likely to prove a disappointment because it is the wrong conference on Somalia.

First, if one is really serious about fixing the myriad problems which the collapse of the former Somali Democratic Republic more than two decades ago has occasioned, one would be well advised to stop dealing in fictions and to start coping with reality. Somaliland in the northwest declared its independence in 1991 and has never looked back. As I noted last year, despite the lack of international recognition, Somaliland’s people have built a stable, peaceful, and democratic polity for themselves. Likewise the Puntland region in the northeast has achieved a certain degree of functionality. There is no rational reason for Somalilanders and Puntlanders to want to tie their future to someone else’s dream (or nightmare) of Somali unity. An international conference that aspires to be more than a photo op needs to actually engage the “little Somalias” that work and not just pay them lip service or waste its resources pining after a unitary Somalia that has not only ceased to function, but has simply disappeared altogether.

Second, no progress will ever be made so long as those invited to parley are politically and militarily irrelevant at best, while many of the actors in a position to affect outcomes are excluded a priori. The international community continues treating Somalia’s Transitional Federal Government (TFG) as if it were a real sovereign when, in fact, it is a not even a government by any commonsense definition of the term: no determined population pays any heed to its edicts and it controls no territory except such as defended for it by the African Union peacekeepers in Mogadishu. About the only thing that regime officials seem to do well is to misappropriate international aid; last year the TFG’s own auditors accused officials of stealing an astonishing 96 percent of the bilateral donor assistance that passed through their hands during the 2009-2010 biennium.

And when one thought the farce could not get any worse, it is now not even clear that TFG President Sheikh Sharif Sheikh Ahmed can even claim to represent his so-called government when he rises to speak tomorrow. Yesterday, the speaker of the Somali Transitional Federal Parliament sent a letter to Prime Minister Cameron in which he accused the president and the deposed parliamentary speaker of having “failed the Somali people since the elections of January 2009” and by their actions making “the renewal of the civil war more likely.” The current speaker and the one hundred parliamentarians who signed his letter declared that the two other leaders “no longer represent the Parliament that elected them…they do not speak for or represent the Somali public.”

While TFG nonentities and ne’er-do-wells are being extended diplomatic courtesies in London, the people who actually control real levers of power in Somalia—the businessmen, warlords, pirate kingpins, and others—will largely be absent. I would include in this category the clan elders and militia leaders who have aligned themselves in the past with al-Shabaab but who are certainly less than thrilled by the new formal affiliation with al-Qaeda which the hardline extremists at the apex of the movement recently declared with little or no consultation. While these characters are hardly saints, they at least have significant followings among the clans in southern and central Somalia and, if their interests are not taken into account, can easily become spoilers capable of scuttling any possibility of progress. As Bronwyn Bruton and I noted recently in an essay for Foreign Affairs, some way has to be found to engage those who can be dealt with and then isolate the remainder.

Third, given the failure of no fewer than fourteen attempts to reconstitute a central government in Somalia since 1991, the utter inability of the current batch of so-called Somali leaders to so much as organize an even quasi-functional municipal government for Mogadishu after the AMISOM peacekeepers cleared al-Shabaab militants out of the city for them last year, and the damage that this statelessness has inflicted upon neighboring countries as well as the Somali people, some should ask whether some more direct form of international supervision ought not be considered to help steer the country back to something approximating normalcy. Such an extraordinary measure should not be taken lightly but there are convincing arguments to be made under both classical realpolitik grounds of maintaining regional and global security and more recent notions of the responsibility to protect (“R2P”). A somewhat controversial note to this effect, originating from the Italian government, circulated in recent weeks but the trial balloon it raised about replacing the TFG with a joint representative for both the United Nations and the African Union, assisted by a mixed international and Somali technical administration, was quickly shot down. Whatever the flaws of their proposal, the memorandum’s authors deserve to be commended for at least being open to the possibility of a different approach.

Perhaps the London Conference on Somalia will make a modest contribution by at least raising awareness of the multiple threats posed by the ongoing crisis of Somalia. Such consciousness might even begin the laborious process of getting things moving past what has been a long and frustrating impasse for the Somali people and their neighbors—to say nothing of the taxpayers and consumers in developed countries who have footed the bill for hundreds of millions, if not billions, of dollars. However, for the summit to have had any realistic chance grappling with even half of the items on the agenda tabled by its hosts, they would have had to have organized the meeting to embrace a different set of actors from a different Somalia on the basis of an entirely different model going forward. All that, alas, would evidently have required a bolder vision and a great deal more political courage, will, and commitment than most of the international community is prepared to muster for Somalia, even after all these years.