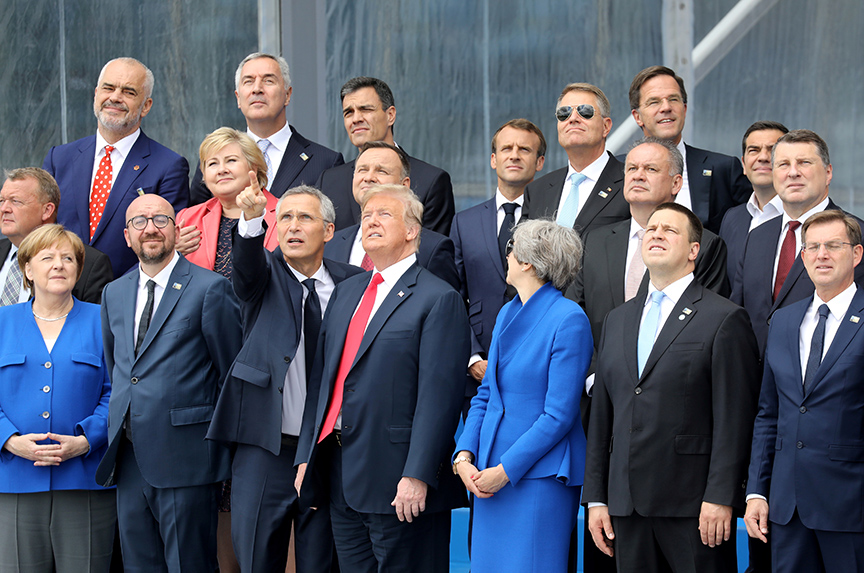 Last year, German Chancellor Angela Merkel said, after meeting US President Donald J. Trump at the NATO Summit in Brussels, “The times in which we could completely depend on others are, to a certain extent, over…We Europeans truly have to take our fate into our own hands.” That she said it on Memorial Day weekend—the day the United States honors veterans of World War II—seemed an especially sharp rebuke.

Worse than the rebuke was this: Merkel might not be wrong. Trump threatened at this week’s NATO Summit in Brussels to “do his own thing,” if allies did not increase their defense spending. That comment came on the heels of his administration having publicly floated the idea of withdrawing US troops stationed in Germany, already at their lowest level since they first crossed the Rhine in 1944. The withdrawal of the United States from NATO, or of US troops from Germany, would represent a tectonic shift in geopolitics unparalleled in the postwar era.

NATO is the signature pillar of the liberal international order, given teeth by the presence of US troops on the European Continent. As the collective security organization of the world’s most powerful liberal democracies, NATO embodied the free world’s cooperative effort to build and sustain a world that reflected its values.

Today, the transatlantic alliance—and the liberal international order it underpins—is at its lowest ebb in its 69-year history. Some European policymakers have publicly contemplated a European nuclear deterrent in lieu of the US security guarantee. The United States’ closest allies in world’s most powerful and important strategic region are moving toward replacing cooperative security with rearmament and proliferation. This is how the liberal international order dies.

European doubts about American resolve predate the Trump era. American policymakers’ words and choices going back more than a decade have caused them to recalculate their expectations of US foreign policy. For example, they may have concluded from the eight-year war in Iraq that the United States is too distracted by Middle Eastern affairs to devote bandwidth to Europe. It was during the Iraq war that Russia, under the newly-installed President Vladimir Putin, first started showing serious discontent with the US-led post-Cold War order, and it was during the Iraq war’s later stage that Russia launched its military operation in Georgia.

Additionally, the Europeans might look at the US withdrawals from Iraq and Afghanistan—and the serious strains that the latter conflict put on NATO—and conclude that American willpower has waned; that its fighting prowess had deteriorated and political commitment to security and liberty abroad had eroded. Putin, again, almost certainly came to the same conclusion and gambled on an invasion of Ukraine in 2014.

Finally, the Europeans may have felt disillusioned by former US President Barack Obama. Having come into office promising a new era of American leadership, Obama mocked the idea of Russia as a serious foreign policy threat during the 2012 campaign, did little to punish Russia’s invasion of Ukraine in 2014, and was passive in the face of Russia’s effort to undermine the United States’ own presidential election in 2016. He spent his tenure talking about a “pivot” or “rebalance” to Asia that likely left Europeans feeling overlooked and their concerns about Russia neglected.

In this context, some of Trump’s behavior and comments about the United States’ role in the world do not look like extreme outliers. He called NATO obsolete and refused for months to endorse the Article V security guarantee, decried foreign military adventures, berated the allies as free-riders, and called for an “America First” foreign policy—all before his histrionics at the NATO Summit. There are other reasons to be uniquely worried about the Trump presidency, but to many Europeans, his foreign policy probably looks like a continuation, not a radical departure, of a drift that has been evident for at least a decade.

In the face of Russian aggression and American passivity, some Europeans have finally started to take European self-defense more seriously. Half the allies have increased their defense budgets by more than twenty percent in real terms since 2011. Latvia and Lithuania have led the way with increases of 146 and 208 percent, respectively, followed by Romania (96 percent), Estonia (58 percent), Turkey (52 percent), and Poland (43 percent), all of whom except Turkey now nearly meet NATO’s 2 percent of GDP goal. Bulgaria, Hungary, the Netherlands, and Norway have made smaller moves in the right direction. Greece and the United Kingdom have long met the target and continue to do so.

Most of these are front-line states, the ones most directly threatened by Russian revanchism. They feel more acutely than the remoter European states the threat from Russia’s growing assertiveness and Russia’s perennial habit of defining security as regional hegemony.

The Eastern Europeans’ renewed military investment is welcome, but it is unlikely to be enough. The percentage increases are large, but they are almost uniformly in the poorest or smallest European countries, meaning the absolute value of their military expenditures is still small. Without matching commitments from the major economies of Western Europe, the poor countries of the East would have virtually no chance in an actual military confrontation with Russia.

That is why some Europeans have started to think the previously unthinkable: the need for a European nuclear deterrent. No single European state can compete with Russia’s conventional military power (possibly excepting Germany, which is unlikely to accept that mantle). Nor can the Europeans unify against Russia: European military cooperation is nearly impossible without American (or German) leadership. Few have the appetite or desire to restart conventional great-power military competition in Europe.

Since Trump’s election in 2016, the notion of a European nuclear deterrent had made the rounds. In most versions of the idea, Europe achieves a nuclear deterrent on the cheap through France extending its nuclear umbrella. The head of Poland’s ruling party advocated for it. A German lawmaker called for it. Der Spiegel and the Financial Times have broached the topic. Some American scholars, including Doug Bandow of the Cato Institute, have endorsed the idea. The idea gained enough traction that Merkel was forced to deny that Germany intended to acquire nuclear weapons last year.

The idea has some logic to it. There is no geographic feature that makes for a convenient defensible line between Europe and Russia. That absence makes an arms race almost irresistible. Good fences make good neighbors, and large mountains, rivers, and oceans make good fences. Without such a fence, Russia has spent its entire modern history seeking security on its western border and Europe, likewise, its eastern border.

In lieu of geography, and without the US security umbrella, the Europeans could create a fence in the form of a nuclear deterrent. Some scholars have long argued that nuclear weapons are fundamentally defensive; that their use lies primarily in the deterrent effect of having them and being able to use them in extremis, e.g., in cases of invasion or regime survival. If true, a European nuclear deterrent could be the “fence” the Europeans need to compel Russia into good neighborliness.

The specter of a rearmed nuclear Europe facing off with Russia in a new Cold War is tantamount to the undoing of the postwar and post-Cold War settlements. Nor is it clear that Europe would hang together in such a scenario. The temptation to defect and bandwagon with Russia, especially given its economic clout in the energy markets, could be quite strong. A fractured Europe would make further proliferation highly likely.

But it is unclear what alternatives exist for the Europeans in the era of Trump’s “America First” foreign policy. A world where peace is held together by mutual nuclear terror is not optimal. But it seems to be one the American electorate voted for when they elected a nationalist on an “America First” platform. They no longer want to be the guarantors of liberal order, yet they want to continue receiving the benefits of that order. The only viable path to European security without US leadership is leadership, and power, in the hands of others. “America First” means, ironically, passing the baton to others.

Paul D. Miller is a professor in the practice of international affairs at Georgetown University’s School of Foreign Service and a nonresident senior fellow at the Atlantic Council’s Scowcroft Center for Strategy and Security. He previously served as Director for Afghanistan and Pakistan on the NSC staff for Presidents George W. Bush and Barack Obama. His most recent book is American Power and Liberal Order, by Georgetown University Press.