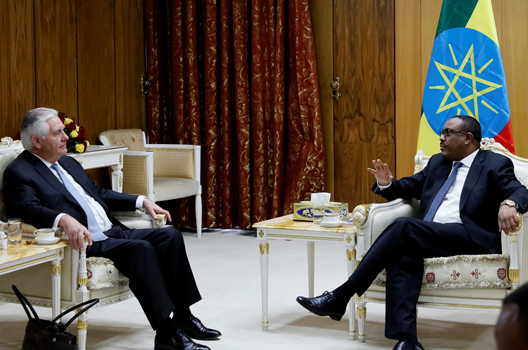 US Secretary of State Rex Tillerson traveled to Ethiopia this week to underscore US support for a crucial partner that finds itself in a crisis.

Ethiopian Prime Minister Hailemariam Desalegn resigned unexpectedly on February 15 in the wake of violent anti-government protests. The government then imposed a nationwide state of emergency that lawmakers endorsed earlier in March.

While Tillerson urged Ethiopian citizens to be patient with their government and refrain from violence, he also unequivocally condemned the state of emergency.

The secretary’s statements provide much-needed clarity from the United States, according to Bronwyn Bruton, deputy director of the Atlantic Council’s Africa Center.

While past US administrations took a softer approach to abuses committed by the government in Addis Ababa, US President Donald J. Trump’s administration has begun to look at Ethiopia, and other partners in the Horn of Africa, from a much more pragmatic and transactional point of view, she said.

“They’re businessmen,” Bruton said of the Trump administration, noting that this approach has proven helpful as the US seeks to navigate the current crisis in Ethiopia.

Bruton joined Kelsey Lilley, associate director of the Africa Center, for a Facebook Live discussion on March 8 on Tillerson’s trip to Africa and the US role in Ethiopia.

According to Lilley, while the Trump administration’s strong stance is a positive development, the United States must keep in mind that African nations have options when it comes to their international partners.

To drive home this point, Russian Foreign Minister Sergey Lavrov, too, was visiting Ethiopia at the time Tillerson was present. That may be pure coincidence, said Bruton, but the United States should take note that Ethiopia does not remain dependent on the United States.