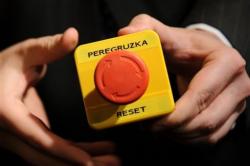 When even a handful of demonstrators take to Tbilisi streets, residents of the Georgian capital wonder whether Russia will seize upon a pretext for further aggression against Georgia. And, they ask, what lies between us and the Russian tanks that occupy the Georgian region of South Ossetia, just 40 kilometers away? The answer: a diligent and proud Georgian army, including Iraq and Afghanistan veterans, barred from acquiring western military equipment since Russia invaded Georgia in August 2008.

Georgian parliamentarian Davit Darchiashvili, speaking of this spring’s demonstrations, told Radio Free Europe, “There is no reason to think in terms of a large-scale threat…But we can’t rule out that several hundred people have coordinated with Russia in different ways and are ready to take various kinds of steps."

Accordingly, the Russian press has hyped the dwindling Tbilisi protests to extreme proportions, and many western media outlets have regurgitated Moscow’s line. Join together this fabricated image of Tbilisi on the cusp of crisis, well-consolidated Russian occupation of the Georgian regions of South Ossetia and Abkhazia and Russian stonewalling at the Geneva talks aimed at resolving the conflict and one can see why some people are concerned.

Moreover, Russian Foreign Minister Sergey Lavrov’s visits last month to the two occupied Georgian regions—which Russia, Nauru, Nicaragua and Venezuela recognize as independent countries—underscore that Moscow is digging in and the west is unwilling to go beyond formulaic protests.

The west is willing, however, to bend over backward to appease Russia. Since the 2008 Russian invasion, western countries, led by the United States, have maintained an arms embargo on Georgia, fueled by Russian bellyaching about fictional arms supplies to Georgia.

To cut through the pettifoggery behind which some western officials hide this pusillanimous policy, let us be clear. There is no formal embargo. And, after two-and-a-half years of pleading, prodding and explaining by Georgia and its western supporters, some small items that the Georgian Army needs for its mission in Afghanistan have been approved. So, strictly speaking, there is an undeclared near-total arms embargo on Georgia.

Whatever the label, the defensive systems—anti-armor, anti-air and command and control equipment—that Georgia needs to deter further Russian aggression have not been forthcoming.

Instead, western officials mention the US training afforded Afghanistan-bound Georgian forces and they prattle on about rejecting a Russian sphere of influence, supporting Georgian territorial integrity and sovereignty and even reiterating the promise of Georgia’s eventual NATO membership—all of which are inconsistent with hindering Georgia from mounting a reasonable homeland defense.

In a more sophisticated—or sophistic—twist, some western officials argue that the Georgian Armed Forces are not ready for such equipment. This despite Georgia’s post-2008 war western-guided efforts at military training, education and doctrine formulation. But there are limits to the training and doctrine development an army can achieve without knowing upon which weapon systems it can count.

Besides, war is not about being ready; it is about being as ready as possible. Time is an essential element—and Georgia may not have the time.

It is incredible that America could not train the army of the country that the United Nations ranks as the world’s most literate, a force that it has successfully trained for Iraq and Afghanistan, to use anti-tank weapons, surface-to-air missiles and radios.

With western officials ducking serious discussion of the embargo, it is hard to understand the official reasons for it. However, all evidence points to the Obama Administration’s US-Russia reset policy and similar European policies. Paying attention to Russian aggression and assisting Georgia would enrage Moscow and expose reset for the sham that it is.

But no one in government will say just that, so to understand, one must have recourse to those who write in defense of the embargo.

In a recent article on The Atlantic website, Joshua Kucera argues that “Any defensive weapon makes aggression easier by improving defense against a counterattack.” To grasp such contorted reasoning one would have to be inhaling the diesel fumes from the Russian tanks that now occupy two Georgian territories.

So Kucera cites a recent paper by Cory Welt and Samuel Charap, which opines that providing weapons to Georgia would perpetuate a “Berlin Wall Mentality.”

Readers are forgiven if they fail to understand the analogy—the Berlin Wall, dubbed the Anti-Fascist Protection Wall by its East German and Soviet architects, was built in 1961 to prevent East Germans from escaping to the west. It was brought tumbling down in 1989 because, from 1945, the United States and its allies firmly stood upon principle, staunchly defending encircled West Berlin.

That leads to Kucera’s third attempt at logic: “Even if Georgia were armed to the teeth”—which no one proposes—“it’s not clear how much good it would do them. Russia’s military is so much stronger than Georgia’s that additional weapons would be a moot point.”

With such reasoning, no small country defense would be possible—all would succumb to big bullies.

Regrettably, this sort of poppycock has become standard fare—it even passes for strategic thinking in some quarters.

In a purported June 17, 2009 US Embassy Moscow cable posted on the Internet by Wikileaks, the author argues that there is “No way to neutralize the advantages of geography, size and capabilities enjoyed by Russia.” He or she then proceeds to the central tenet of reset: rather than assist Georgia to defend itself, “We can create the time and space to intensify cooperation with Russia in other areas of strategic interest, adding ballast to the US-Russian relationship that could make Moscow think twice about exacerbating tensions in the Caucasus.”

Some common sense remains, however. The very next day, a purported US Embassy Tbilisi cable posted on the Internet by Wikileaks retorts, “It is Russia and its proxy regimes that have dramatically increased the militarization of Georgia…in direct violation of the commitments President Medvedev made in the cease-fire agreement.”

This author continues that Georgia does not aim to defeat Russia, but to hinder any further invasion and stave off occupation of Tbilisi, to give time for international pressure on Russia to halt the attack. “To achieve this extremely limited goal, Georgia needs sufficient anti-armor and air defense capability to stall a ground advance, which it currently lacks.”

This is a sensible strategy. Georgia cannot defeat Russia, but that is a false dilemma. Its objective is to deter further aggression from a known aggressor by setting up obstacles, imposing costs and exposing the invader to international pressure. The opposite—the reset-driven embargo—invites aggression and inevitable bloodshed, which would, by the way, consign the Obama Administration’s reset policy to the dustbin forever.

It is time to lift the embargo on Georgia and to place an embargo, instead, on the reset policy that underlies it.