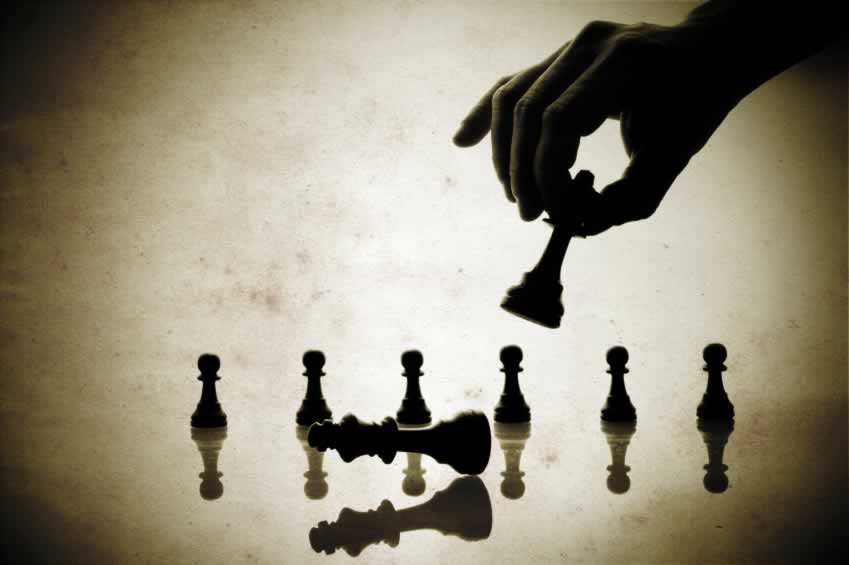 British Field Marshall Viscount Alanbrooke of Brookebrorough, one of World War II’s most accomplished and distinguished generals, regularly complained about the lack of American strategic thinking. In Alanbrooke’s view (and Churchill’s too) Washington was too anxious to open a second front the continent and woefully unprepared to face the superior Nazi Army in battle. Hence, the assault began at the peripheries in North Africa, Sicily and Italy before Operation Overlord landed on the beaches of Normandy in June 1944.

Unfortunately, this absence of American strategic thinking was not limited to World War II. During the Korean War, General Douglas MacArthur’s assault at Inchon was a brilliant if not reckless effort to outflank the North Koreans and permit the breakout from the Pusan perimeter on the southeast tip of the peninsula. The recklessness was not in the form of a surprise amphibious attack. It was the location. The allies could have landed safely and more easily thirty miles to the south without risking the potential dangers of huge tidal changes at Inchon and achieved the same tactical purpose. And then MacArthur threw away this victory in the strategically incompetent decision to race to the Yalu River that dismissed Chinese warnings to cross the border into North Korea that drove UN forces back to the 38th parallel that still divides Korea today.

In Vietnam, “escalation,” “search and destroy” and the use of “body counts” to measure success were sound bites not strategies. In Afghanistan and Iraq four decades later, tactical victory was lost by strategic blindness to raising the question of “what next?” and the failure to anticipate a post-war strategy. Most recently, the so-called “strategic pivot” to Asia allowed rhetoric to overcome reason and in the process alienate or frighten friends and allies in Europe, the Middle East and of course the Pacific.

The larger and more provocative question perhaps more appropriate to psychiatrists, psychologists and social scientists is whether or not Americans generally are missing the strategic genome in our collective DNA. There are exceptions. President Dwight Eisenhower clearly understood the broader strategic issues having learned the hard way during the war. President Richard Nixon and his National Security Advisor Henry Kissinger; Zbigniew Brzezinski, Jimmy Carter’s National Security Advisor; and President George H.W. Bush and his advisor Brent Scowcroft likewise appreciated and possessed strategic minds.

That said, the nature of the political process, the attraction and dominance of seeking short-term solutions to longer-term problems and the failure of institutionalizing the need for strategic thought in government officials are among the key reasons why, too often, both Republican and Democratic administrations alike and White Houses and Congresses fall in the trap of not asking or answering the most basic questions regarding broader policy issues that require sound strategic approaches. The last presidential election offered the most powerful evidence of the absence of strategic thinking by the two candidates. President Barack Obama and Governor Mitt Romney agreed that in the case of Iran, “no option” was off the table, meaning all options were open including allowing Iran to develop nuclear weapons and the dreaded “containment” policy to deter Tehran in that event. The intent was to imply or signal the threat of military force to help coerce the Iranian leadership to forego building nuclear weapons. But words count and “no option” being off the table reflects strategic naivete or worse.

Regarding the political process, politics in America today no longer are about governing and have deteriorated into a perpetual campaign for election and re-election in which compromise is a profane and perhaps unacceptable notion. Negative ads and compression of ideas into simplistic sound bites distort and substitute for political discourse. And the two political parties have sadly gravitated to the more extreme poles of left and right.

Business likewise is driven by the short-term. Public companies are mesmerized by quarterly reports and the impact on stock prices this data have. The media follow this contour. Compare, for example, so-called television evening news with programs from several decades ago that in some cases were an hour in length and rarely were so fixated on “human interest stories” such as dolphin bites child or the bad behavior of the latest celebrity. And despite the billions of dollars the U.S. military invests in education, its war colleges have been directed to focus on “supporting the warfighter” to the detriment of senior leader development along more strategic and not tactical lines.

What if anything can be done about restoring this potentially missing gene to American politics understanding that the absence of strategic thinking is not unique to the United States as the Taliban in Afghanistan, Saddam Hussein in Iraq and many others learned to there regret? Three key remedial actions lead the way in this regard once we understand the need for real action.

What is needed first and foremost is a brains based approach to strategy. No longer can we spend our way clear of danger as we have tried to do in virtually every war we fought. In World War II, the arsenal of democracy overwhelmed the enemy. In Korea, the Cold war, Vietnam, Iraq twice and Afghanistan, we spent trillions of dollars. Some of the things we did were brilliant especially in terms of technology. As noted, strategic brilliance was rare and limited. Today, we need first to think our way clear of problems. This requires brains.

To shift to a brains based approach, history matters. It is not difficult to conduct a review of the major wars, conflicts and crises in which the United States has been engaged since 1945 to see what went right; what went wrong; and why. This requires using the grey matter between our ears. In virtually every case, success or failure rested on the quality and veracity of the assumptions made at the time; the setting of achievable outcomes; the degree of objectivity or truth involved; and how the “what next?” question was answered (or not!). Such a review should be mandatory reading for national security officials in every administration and Congress as a way of introducing a brains based approach.

Take for example the Cuban Missile Crisis of 1962. Let us think our way through this. Contemporary mythology remains that this was a great victory for the Kennedy Administration as the Soviets backed down and removed the missiles from Cuba ultimately leading to the coup two years later that felled Nikita Khrushchev from office. Unfortunately, that characterization is simply wrong.

John Kennedy entered office running on the so-called missile gap that was not only non-existent. The Soviets were massively inferior in strategic and conventional weaponry. Indeed, Khrushchev had finally accepted the Eisenhower doctrine of massive retaliation with less emphasis on costly conventional forces and set the Soviet Union on a program of imposing huge defense cuts in order to shift money to the public and to the economy that were desperately needed. In essence, Khrushchev wanted to create a Soviet variant of nuclear deterrence that corresponded to Eisenhower’s strategic policies designed to defuse and not fuel an arms race.

The US and UK knew all this through the Penkovsky papers (microfilmed copies of top secret Soviet papers passed on the CIA by military intelligence Colonel Oleg Penkovsky subsequently caught and executed for treason) and other sources. For cynical political reasons, Kennedy ignored this intelligence taking seriously his election rhetoric meant for running to the right of his opponent Vice President Richard Nixon. Based on this invention of a missile gap, upon entering office, Kennedy sent several supplemental defense spending bills to Congress to build up strategic and conventional forces and that would triple the size of the American nuclear arsenal. The failed Bay of Pigs invasion and US build up signaled to the Soviets that the Eisenhower days were over and that something had to be done to maintain some strategic balance if defense spending was to be curtailed.

Rather than raise defense spending and curtail programs to improve Russian’s standard of living, Khrushchev proposed to outflank US strategic systems by inserting shorter-range missiles in Cuba. After all, the US had done this in Turkey. And with those missiles based in Cuba, Moscow could avoid a costly build up of longer-range rockets. Kennedy’s advisors knew yet rejected the Penkovsky material as McGeorge Bundy, national security advisor, and Robert McNamara, Secretary of Defense separately and later told me in graphic detail. That intelligence was not relevant said McNamara over a lengthy lunch because the president had decided on a real military buildup and no one was prepared to question that decision. The result was more Cold War and elimination of any prospect for an earlier termination of this conflict.

Second and certainly as new administrations assume office, there must be a formal course for all senior officials including the president to encourage a brains based approach to strategy. Analysis of this historical review of what went right and what went wrong is one way for institutionalizing the capacity for strategic thinking and greater reliance on our brains. The reality is that the last president who entered office prepared for the job was George H.W. Bush. Bill Clinton, the younger Bush and Barack Obama simply lacked experience and real strategic understanding. And for those who argue that administrations often bring in officials with prior experience, the fact is that these people may be as much as eight years or two terms out date at a time when international events are shifting with the speed of light or at least nearly instantaneous communications.

Third, because the Department of Defense maintains the largest reservoir of educational assets in the government, a revolution in how this array of institutions can be put to better use in enhancing understanding and knowledge through pursuit of continuous learning is crucial. Technology exists to support this undertaking including distance learning and the creation of new Wikipedia type repositories of strategic case studies and knowledge. And the experiences of the last decade of conflict have inspired in all military ranks the appreciation that all forms of knowledge and understanding are vital to success. This revolution can thus serve as resource for all of government engaged in strategy and national security and need not be very costly. Indeed, we probably can save significant amounts of money if we apply some strategic thinking to how we educate our people.

Politics being politics, the chances of these actions occurring are not good. The likelihood is that future presidents will not enter office properly prepared as will too many members of Congress. History may not repeat. However, if a fair analysis of past successes and failures is conducted, the future track record will not be better than the past and could be a lot worse. To repeat, it is time we used our brains and not always our brawn to think our way clear of danger.

Harlan Ullman, a senior advisor at the Atlantic Council, is chairman of the Killowen Group that advises leaders of government and business. This column was first published by The National Interest.